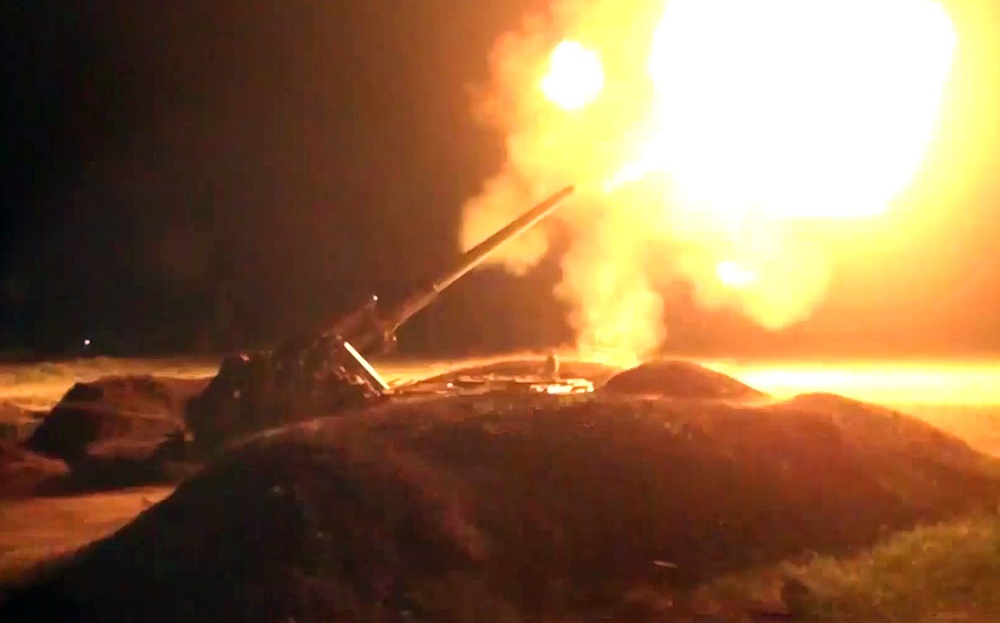 Clashes between Armenian and Azerbaijani forces along the Line of Contact erupted on September 27 after Armenia's forces deployed in the occupied Azerbaijani lands started shelling the military and civilian positions of Azerbaijan. / Ministry of Defense of Azerbaijan

The ongoing fighting between Armenia and Azerbaijan has split the international community into three camps, a group of countries openly supporting Azerbaijan, some backing Armenia, and a third that has remained neutral.

Baku received first and foremost support from Turkey as Azerbaijan aims to liberate its Nagorno-Karabakh region and seven surrounding districts that are forcibly occupied by Armenia. Earlier, Turkey's President Recep Tayyip Erdogan voiced his strong support to Baku in what is the most intense fighting between Azerbaijan and Armenia since a ceasefire agreed in 1994.

"The time has come for the crisis in the region that started with the occupation of Nagorno-Karabakh to be put to an end," Erdogan said in his speech at a symposium on international maritime law and the eastern Mediterranean in Istanbul this week.

"Once Armenia immediately leaves the territory it is occupying, the region will return to peace and harmony," he said, adding Yerevan is to blame for escalating the tensions.

Pakistan has followed in the footsteps of Turkey to support Azerbaijan’s “right of self-defense". The Foreign Ministry of the country issued a statement on Sunday, calling Armenia's ongoing aggression reprehensible and unfortunate.

"This could compromise peace and security of the entire region. Armenia must stop its military action to avoid further escalation," read the statement, which added that "We support Azerbaijan’s position on Nagorno-Karabakh, which is in line with the several unanimously adopted UN Security Council resolutions.”

Clashes between Armenian and Azerbaijani forces along the Line of Contact erupted on September 27 after Armenia's forces deployed in the occupied Azerbaijani lands started shelling the military and civilian positions of Azerbaijan. Azerbaijani troops took immediate counter-attack measures to push back against Armenia’s artillery offensive. Yerevan threatened Baku with the deployment of the Iskander ballistic missile, the operational range of which is 400-500 kilometers (250-310 mi).

Armenia's armed forces killed at least 19, including five members of one family, and injured 55 civilians in Azerbaijan in the past six days of heavy clashes. There is no official information about a number of military casualties in Azerbaijan.

According to the official Armenian data, Armenia’s military casualties are 156. However, the Defense Ministry of Azerbaijan reported about the deaths and injuries of around 2,300 Armenian servicemen in the wake of the fighting.

Azerbaijan’s President Ilham Aliyev said the fighting will stop if Armenia withdraws its forces from the occupied Azerbaijani lands.

“We have one condition – they must leave our lands unconditionally, completely and immediately. This condition is still standing, and if the Armenian government fulfills it, the fighting will cease, bloodshed will stop, and there will be peace. Peace will come to our region. We want peace, we want this issue resolved,” President Aliyev said in a meeting with the wounded Azerbaijani servicemen on Wednesday, according to President.Az.

Georgia, the neighbor of both Armenia and Azerbaijan in South Caucasus, voiced its concerns over the escalating tensions with President Salome Zurabishvili calling for peace and stability as a common cause for the region. Earlier, Foreign Minister David Zalkaliani of Georgia said in a meeting with his Azerbaijani counterpart Jeyhun Bayramov that Tbilisi supports Azerbaijan’s territorial integrity and sovereignty within its internationally recognized borders.

“We support Azerbaijan's territorial integrity and sovereignty just as Azerbaijan always supports our territorial integrity and sovereignty,” President Zelensky said during a conversation with journalists in Ukraine’s Chernivtsi region. “I want to draw the attention of the media, society and Western partners that there are no frozen conflicts just like that. They can be frozen for a specified time. This is our position.”

Bosnia and Herzegovina’s Foreign Minister highlighted the inadmissibility of Armenia’s rejecting to fulfill four UN Resolutions and called for a solidarity with Azerbaijan. Moldova and Afghanistan have reportedly took Azerbaijan’s side in the overall context of the Nagorno-Karabakh conflict and in the ongoing clashes, as well.

Despite its position as one of the co-chairs of the OSCE Minsk Group - the group tasked with mediating negotiations between Armenia and Azerbaijan over the Nagorno-Karabakh conflict, France has thrown its support behind Yerevan. With a call for a compliance with the ceasefire, French President Emmanuel Macron claimed that Azerbaijan allegedly started the recent attacks and vowed to Armenia that France will “play its role.” He also condemned Turkey for its open support to Azerbaijan.

OSCE Minsk Group co-chair Russia has not yet taken openly any sides in the ongoing clashes between Armenia and Azerbaijan. President Vladimir Putin held a phone conversation with his French counterpart to discuss the escalation on Armenia-Azerbaijan Line of Contact. He called for an immediate cessation of hostilities and return to diplomatic channels for settling the Nagorno-Karabakh conflict. Meanwhile, Russia’s Foreign Minister Sergey Lavrov said Moscow is willing to host the foreign ministers of Armenia and Azerbaijan for discussions.

The United States, a partner to France and Russia within the OSCE Minsk Group co-chairmanship, revealed that Washington is looking for ways to stop the hostilities between Armenia and Azerbaijan.

“We’re looking at it very strongly,” President Donald Trump said in a White House press briefing referring to the ongoing battles. “We have a lot of good relationships in that area. We’ll see if we can stop it.”

Meanwhile, the OSCE Minsk Group co-chairmen issued a joint statement calling for both sides to immediately end hostilities and return to the negotiating table with the aim of seeking a sustainable resolution to the decades-old conflict.

Iran, which neighbors both Armenia and Azerbaijan, has officially called on both sides to stop hostilities. Foreign Ministry spokesperson Saeed Khatibzadeh offered Iran’s assistance for renewing the talks between the sides. However, some analysts believe that Iran is covertly taking Armenia’s side despite its neutral statements. Meanwhile, Tehran has reportedly allowed the transfer of a military shipment to Armenia through its territory, however, the claim was denied by Iranian officials.

The UN Security Council condemned in a closed emergency meeting on September 30 the use of force, and called on Armenia and Azerbaijan to immediately end the fighting, as well as resume meaningful negotiations without delay.