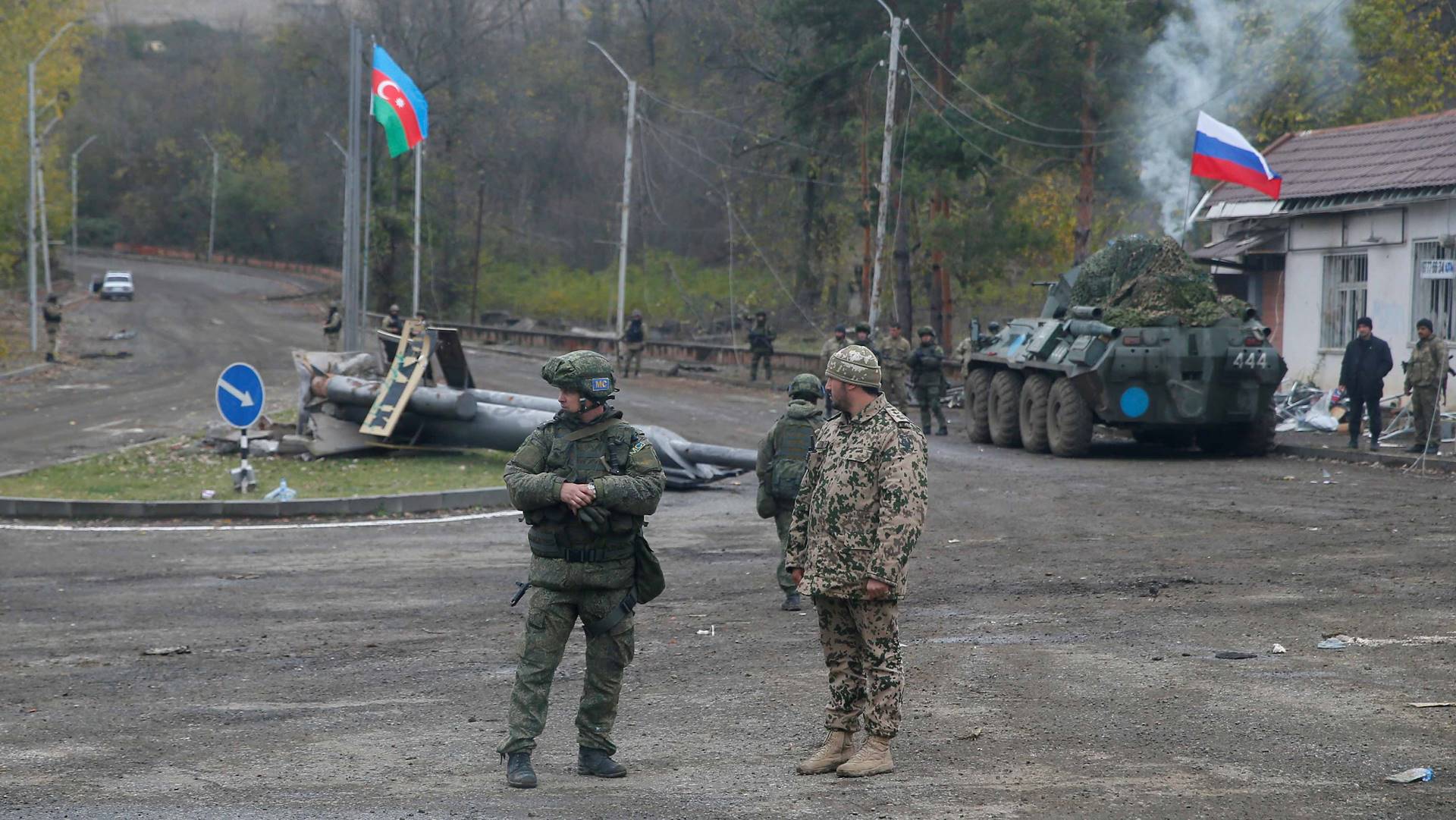 An Azerbaijani serviceman and a Russian peacekeeper stand guard at a checkpoint on the outskirts of Shusha in Azerbaijan's Karabakh region, November 13, 2020 / REUTERS/Stringer

An Azerbaijani serviceman was wounded Tuesday as a result of a ceasefire violation by illegal Armenian armed groups located in the Azerbaijani territories where the Russian peacekeeping forces are temporarily deployed.

According to Azerbaijan’s Defense Ministry, the armed gangs targeted the posts of the Azerbaijani army stationed in the Aghdam district, which was liberated after the last year’s war in the Karabakh region.

“As a result of the shooting, a serviceman of the Azerbaijan Army, senior warrant officer Dadashov Sakit Ahliman, who was involved in road improvement work, was wounded. The wounded serviceman received first aid and was evacuated to a military hospital,” the ministry said in a statement.

Information about the incident was shared immediately to aid the investigation of the Russian Peacekeeping Forces Command and the Joint Russian-Turkish Center deployed in Aghdam.

Russian peacekeepers were deployed in the Karabakh (Garabagh) region of Azerbaijan shortly after the ceasefire was signed on November 10th of last year. According to the tripartite agreement signed by Armenia, Azerbaijan and Russia, the Russian contingent consists of 1,960 servicemen, 90 armored personnel carriers, and 380 units of an automobile and special equipment. The peacekeepers will stay in the region for five years.

The Joint Russian-Turkish Center was launched in Aghdam on January 30, 2021, as part of the memorandum of understanding signed by Ankara and Moscow. The center is tasked with collecting, summarizing, and verifying information on the observance of the ceasefire and actions that violate the agreements reached by Armenia and Azerbaijan. A total of 120 combined Russian and Turkish personnel, including the unmanned aerial vehicle teams, are deployed at the center in equal numbers from both sides.

In November and December of 2020, illegal Armenian armed detachments hiding in the forests around the Khojavand district of Azerbaijan committed two deadly attacks, killing four Azerbaijani servicemen and a civilian. The Azerbaijani troops prevented the offensive in immediate counter-operations by the Defense Ministry and the State Security Service detaining armed criminals. They were identified as terrorists who illegally crossed the Azerbaijani border.

In June, the Armenian troops shelled the Azerbaijani positions six times, in particular, those stationed on the Armenia-Azerbaijan state border.