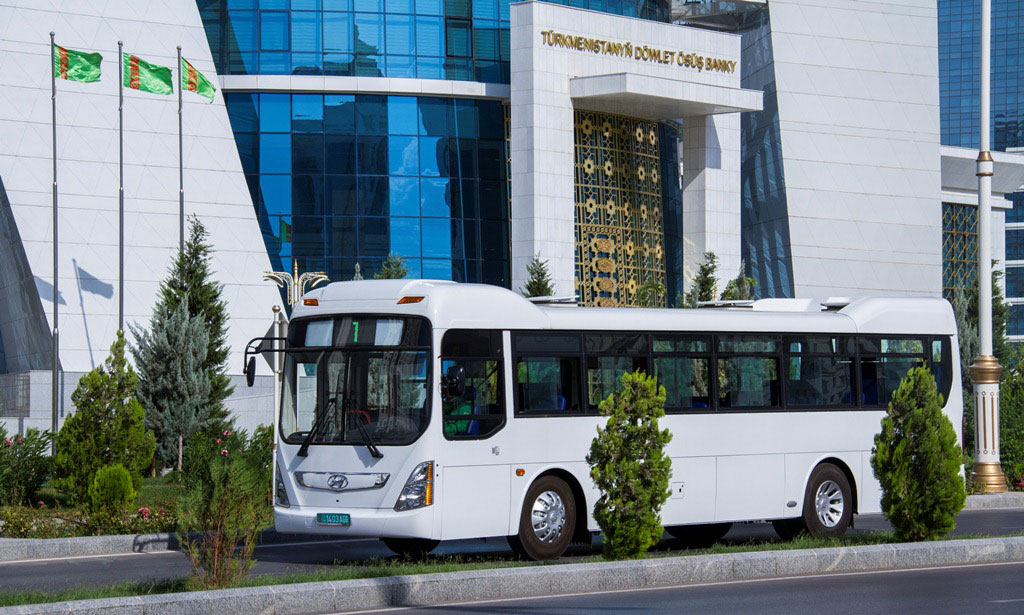 Hyundai Motor has so far supplied the Central Asian nation with a total of 1,200 buses of different models. / Turkmenportal

Turkmenistan’s government is working to bring the country’s public transportation network in line with global standards, as the country has signed a multi-million dollar deal with Hyundai, a multinational automotive manufacturer headquartered in Seoul.

According to the agreement signed between Hyundai Motor and Turkmenistan’s transport ministry earlier this month, the South Korean company is contracted to build 400 heavy-duty single-decker buses for the Central Asian country.

The deal will cost Turkmenistan $60 million or $150,000 per each bus. Hyundai Motor will start manufacturing the ‘‘New Super Aero City’’ passenger buses in May of this year. The buses are expected to be ready before December 12, which will mark the country’s Neutrality Day, and will be used in the capital city of Ashgabat.

‘‘The deal is an honor for Hyundai Motor, because the contract shows the superior quality of Hyundai’s Aero City buses is recognized by the citizens of Turkmenistan,’’ The Korea Times cited the company as saying.

‘‘We will continue our efforts to extend the supply deal that has continued since 2008.’’

A key feature of the bus, which can seat 27 passengers, is its improved safety features such as rear cameras and rear warning systems. The sturdy body, organized with one-piece type roof bows and enforced roof corner panel, provides extra stability and a wide range of safety factors, which ensure the best possible protection for all passengers. At the same time, the Korea-made buses comply with Euro-4 emission standards, set by the European Union in 2005.

Officials in Hyundai Motor believe the company made a significant contribution to the development of the public transport infrastructure in Turkmenistan since it offered bus components, consumable items, and maintenance services as well.

The recent automobile deal with South Korea is nothing new for Turkmenistan.

Hyundai Motor has so far supplied the Central Asian nation with a total of 1,200 buses of different models. At the same time, the recent contract has become the second-biggest deal for the S. Korea-based company in Turkmenistan since 2016, when it supplied 500 buses to the country.

As of today, all city buses previously purchased from Hyundai are operated in the capital city.

Turkmenistan is not the only country in the region to partner with famous foreign automotive brands. Kazakhstan, which is Turkmenistan’s northern neighbor, reached a distribution agreement last year with Xiamen Golden Dragon, which is ranked one of China’s ‘big 10’ bus makers. According to the agreement, Astana Motors will be manufacturing the “Golden Dragon” passenger bus brand at a plant in Almaty, the country’s largest city.

Meanwhile, the deal between Hyundai and Turkmenistan comes amidst global economic turmoil caused by a sharp drop in oil prices and an ongoing pandemic of coronavirus disease, which also had a negative impact on the global economy.

As a result, some carmakers in the United States and Europe, including Volkswagen — the world’s biggest carmaker — have announced they would stop almost all car production.

In February, officials in Hyundai Motor said the company would suspend production in S.Korea because the coronavirus outbreak has disrupted the supply of parts from China, the country most hit by the new disease.