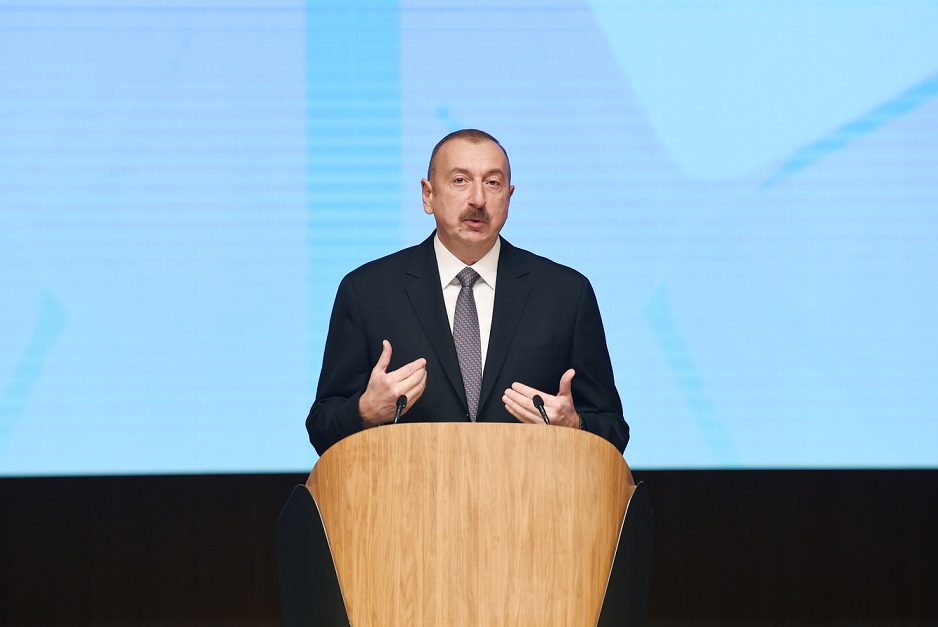 “Discussion of humanitarian issues is very important,” President Aliyev said at the event, which held in the Heydar Aliyev Center on October 25, according to the president’s official website. “Azerbaijan is one of the countries that attach great importance to this area. Many prestigious international events on humanitarian cooperation have been held in our country. Among them, I would particularly like to mention the Global Forum of the United Nations Alliance of Civilizations.”

“At the same time, Baku has played a host to World Religious Leaders Summit. Four times the Intercultural Dialogue Forum was held [in Baku]. Holding the Baku International Humanitarian Forum for the sixth time shows that Azerbaijan has become a very important country for deepening international humanitarian cooperation.”

The humanitarian forum is a biennial conference that was initiated by President Aliyev in 2010 and then-Russian President Dmitry Medvedev. This year’s two-day event, which opened Thursday and ended Friday, brought together 580 participants, including 416 foreigners from 86 countries. Twenty-four international organizations were represented, including the United Nations; the Islamic Educational, Scientific and Cultural Organization; and the Inter-Parliamentary Union.

This year’s edition of the Global Humanitarian Assistance Report produced by Development Initiatives, an independent international development organization, states that conflicts and disasters around the world affected an estimated 201 million people in 2017, pushing them to seek the last resort of international humanitarian assistance in order to cope and survive. The conflicts in Syria, Yemen and South Sudan all continued taking a toll on millions. Disasters in the Caribbean and droughts and food insecurity throughout the Horn of Africa, as well as crises from Burundi to Ukraine, saw millions more hard-hit and struggling on the brink of survival.

“In 2018, 134 million people need humanitarian aid at the global level,” Rashid Khalikov, the UN Assistant Secretary-General for Humanitarian Partnerships with the Middle East and Central Asia, said in his speech at the forum in Baku, according to President.Az.

“The UN and its partners have requested $25.3 billion to meet the urgent need for survivors that suffered a crisis. Conflict remains to be the biggest cause for humanitarian needs. In addition, the number of refugees is increasing, and they remain far away from their native countries.”

Azerbaijan, a country located in the South Caucasus region and on the western edges of the Caspian Sea – just south of Russia and north of Iran – knows what a humanitarian crisis is, because it has been living through such crises that have been lasting through decades.

In the late 1980s, during the twilight of the USSR, the Armenian Soviet Socialist Republic saw an opportunity to make a land grab. Following the formal collapse of the USSR in December 1991, troops from the newly created Armenia marched eastward into another post-Soviet country, the Republic of Azerbaijan, to capture the Nagorno-Karabakh region that had been partially populated with ethnic Armenians living side-by-side with indigenous Azerbaijanis.

Azerbaijan's Nagorno-Karabakh region and seven surrounding districts, which comprise 20 percent of Azerbaijan's internationally recognized territory, were occupied by Armenia during a war that lasted for three years until a ceasefire agreement in 1994, claiming the lives of over 30,000 Azerbaijanis and displacing one million more. Armenia has ignored four UN Security Council resolutions to withdraw its forces from occupied lands, perpetuating the conflict and maintaining what are high tensions between the two countries that were once part of the USSR.

More than a quarter century later – which has included the bloody full-scale war between Armenia and Azerbaijan until a ceasefire in 1994 and daily clashes along the Line of Contact that separates their troops – more than a million Azerbaijanis live as refugees and internally displaced persons (IDPs) in refugee settlements and camps scattered throughout the country.

The UN General Assembly adopted a resolution titled “Providing Emergency International Assistance to the refugees and IDPs in Azerbaijan” at its 85th plenary session in 1993, which was a mechanism to support the vulnerable populations with food aid, health support, shelters and other facilities.

Today, IDPs and refugees in Azerbaijan have been provided with temporary shelters in more than 1,600 settlements in 62 cities and regions throughout the country. As a result of government-sponsored social measures, the poverty level amongst IDPs has decreased from 74 percent to 18 percent during the last years. However, according to the Azerbaijani government, 400,000 IDPs still live in difficult social conditions, out of reach of houses suitable for living.