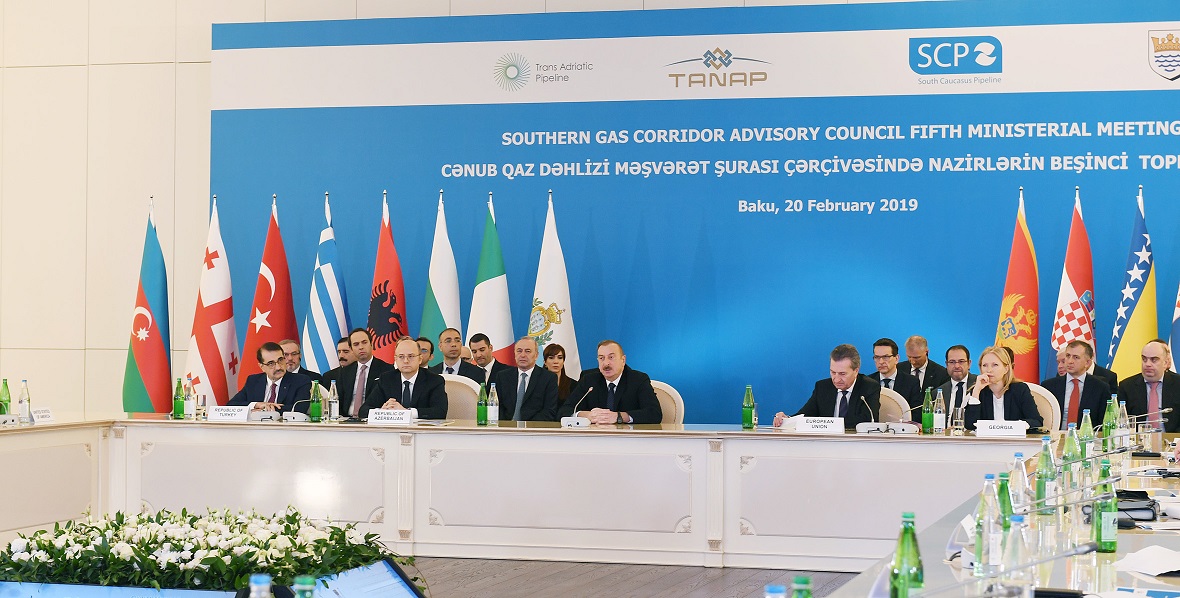 President Ilham Aliyev addressed the conference, speaking about the diversification of energy resources in Europe, the realization of the international Southern Gas Corridor project, and the role of hydrocarbons from Azerbaijan in improving Europe’s energy security.

“The Southern Gas Corridor is the energy diversification project. Diversification of energy resources is very important for producers, consumers and transit countries,” President Aliyev said on February 20 in his speech, according to President.az. “I think we have found a good balance here, I mean between the producer Azerbaijan and the consumer and transit countries. The balance of interests conditions the success of this project.”

“Those states that depend on foreign energy sources can be sure that this route will be durable and lasting,” President Aliyev said. “They should plan their future and industrial development. At the same time, countries with rich natural resources cannot achieve their goals without reliable markets. Thus, it is a project of energy security, energy diversification, and broad international cooperation.”

The Southern Gas Corridor is a billion-dollar natural gas mega-project that starts at the Shah Deniz gas field in Azerbaijan’s sector of the Caspian Sea and ends in southern Italy. The corridor will pump 10 billion cubic meters (bcm) of natural gas each year to Europe starting in 2020. Caspian gas will help power 10 million homes across the continent, and supply Turkey with an additional six bcm of natural gas per year.

The 3,500 km (2,175 mi) corridor consists of three parts: the South Caucasus Pipeline, which stretches from Azerbaijan’s capital Baku and extends westward into Georgia; the Trans Anatolian Pipeline (TANAP) that traverses entire territory of Turkey from east to west; and the Trans Adriatic Pipeline (TAP), which moves through Greece, Albania and ends in Italy.

The expansion project of the South Caucasus Pipeline was completed in May, while TANAP has been in operation since June, 2018. TAP is 87 percent complete and is expected to be finished in time so the entire corridor can go online by 2020.

Shah Deniz is, at the moment, the sole supplier to the corridor, but President Aliyev is confident that other fields in a country with over 2.6 trillion cubic meters of proved reserves will feed into it. Currently, international oil and gas companies are engaged in developing some other offshore fields such as Absheron, Umid and Babek.

“That is why I am sure that Shah Deniz will not be the only source of resources for the Southern Gas Corridor, and the more gas we produce from our fields, the more potential there will be for supplying our partners and diversifing the supply chain we talk about,” President Aliyev said on Wednesday.