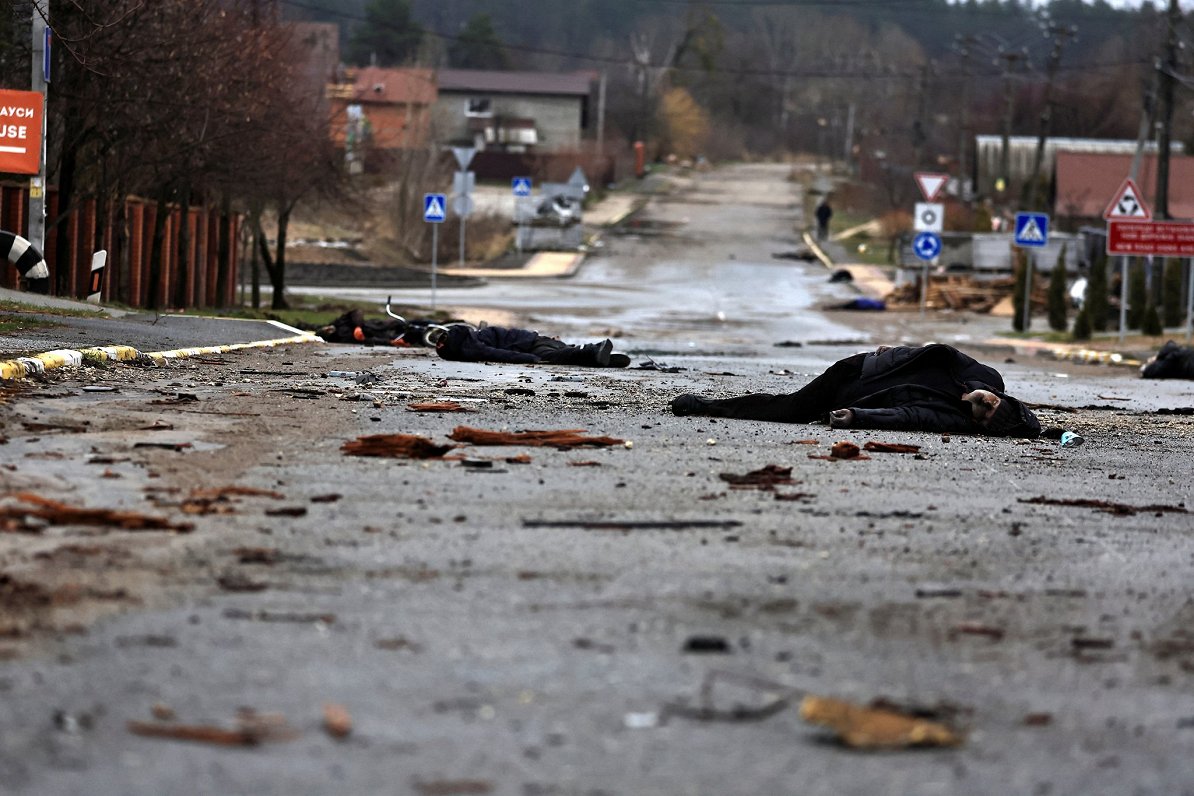 The shocking images captured by AFP show the bodies of at least 20 male civilians strewn across roads in the liberated town. Some had their arms bound behind their backs with a piece of white cloth.

German Defense Minister Christine Lambrecht has suggested that the European Union consider banning the import of Russian gas in the wake of atrocities that occurred in the Ukrainian town of Bucha 37 kilometers northwest of Kyiv.

“There has to be a response,” Lambrecht said on Sunday in an interview with public broadcaster ARD. “Such crimes must not remain unanswered.”

Germany — Europe’s largest economy and biggest buyer of Russian gas — has so far resisted calls to impose an embargo on energy imports from Russia, saying its economy and that of other European countries are too dependent on them.

Given its lack of domestic resources, the EU, with a total population of 447 million people, is considered to be one of the largest and most prolific markets for energy exporters. Russia has dominated the continent’s natural gas market for decades, and imports of Russian natural gas have continued despite the war in Ukraine. To date, Russia supplies 40 percent of Europe’s gas needs.

Russia is facing mounting international condemnation over what Ukraine has called a “deliberate massacre” of civilians in the Kyiv suburb. Officials from Ukraine said on Saturday that the bodies of nearly 300 civilians were found in mass graves in the Ukrainian town of Bucha after Russian troops withdrew from the area.

The shocking images captured by AFP show the bodies of at least 20 male civilians strewn across roads in the liberated town. Some had their arms bound behind their backs with a piece of white cloth.

“Corpses of executed people still line the Yabluska street in Bucha,” the town’s mayor, Anatoliy Fedoruk, told Reuters on Saturday. “Their hands are tied behind their backs with white ‘civilian’ rags. They were shot in the back of their heads. So, you can imagine what kind of lawlessness they perpetrated here.”

On its part, Russia’s defense ministry denied Kyiv’s accusations of the alleged massacre, arguing that all photographs and footage showing dead bodies were “yet another provocation.” The ministry pointed out that Moscow had withdrawn its troops from the outskirts of Ukraine’s capital on March 30, while the so-called evidence of crimes in Bucha appeared only on the fourth day after the withdrawal. All the bodies of people whose images were published have not stiffed, do not have characteristic cadaveric spots and have fresh blood in their wounds, the ministry noted, adding that all those inconsistencies show that the whole Bucha affair “has been staged by the Kyiv regime for Western media.”

Meanwhile, Western capitals have reacted with anger, saying that those responsible for war crimes should pay. On Sunday, German Chancellor Olaf Scholz also condemned what he described as “atrocities in Bucha,” and called for war crimes investigations and increased sanctions on Russia.

Ongoing tension between the EU and Russia over the war in Ukraine has pressured European leaders to rapidly reduce their dependence on Russian energy. While the US and the UK have said they will stop buying Russian oil, European leaders have focused on limiting their imports over the next several years through conservation, finding alternative sources, and switching to wind and solar power as fast as possible.

Since Russia’s invasion of Ukraine began on February 24, European countries have been rushing to end their dependence on Russian petroleum. Germany has said it would aim to be “virtually independent” from Russian oil by the end of this year and from gas by mid-2024.

Meanwhile, Lithuania has become the first EU country to cut off Russian gas supplies completely, with two other Baltic states also temporarily stopping its flow in response to Russian President Vladimir Putin’s demand to pay for gas in rubles. Lithuanian authorities said that from April 1 they would no longer import Russian gas but instead rely on liquefied natural gas from their terminal called Independence.

With the Russian economy crippled by unprecedented international sanctions, Putin warned that “unfriendly” countries, including those responsible for sanctions against Russia, would have to pay for Russian natural gas in rubles rather than dollars or euros. He said that existing contracts would be halted if the payments were not made.