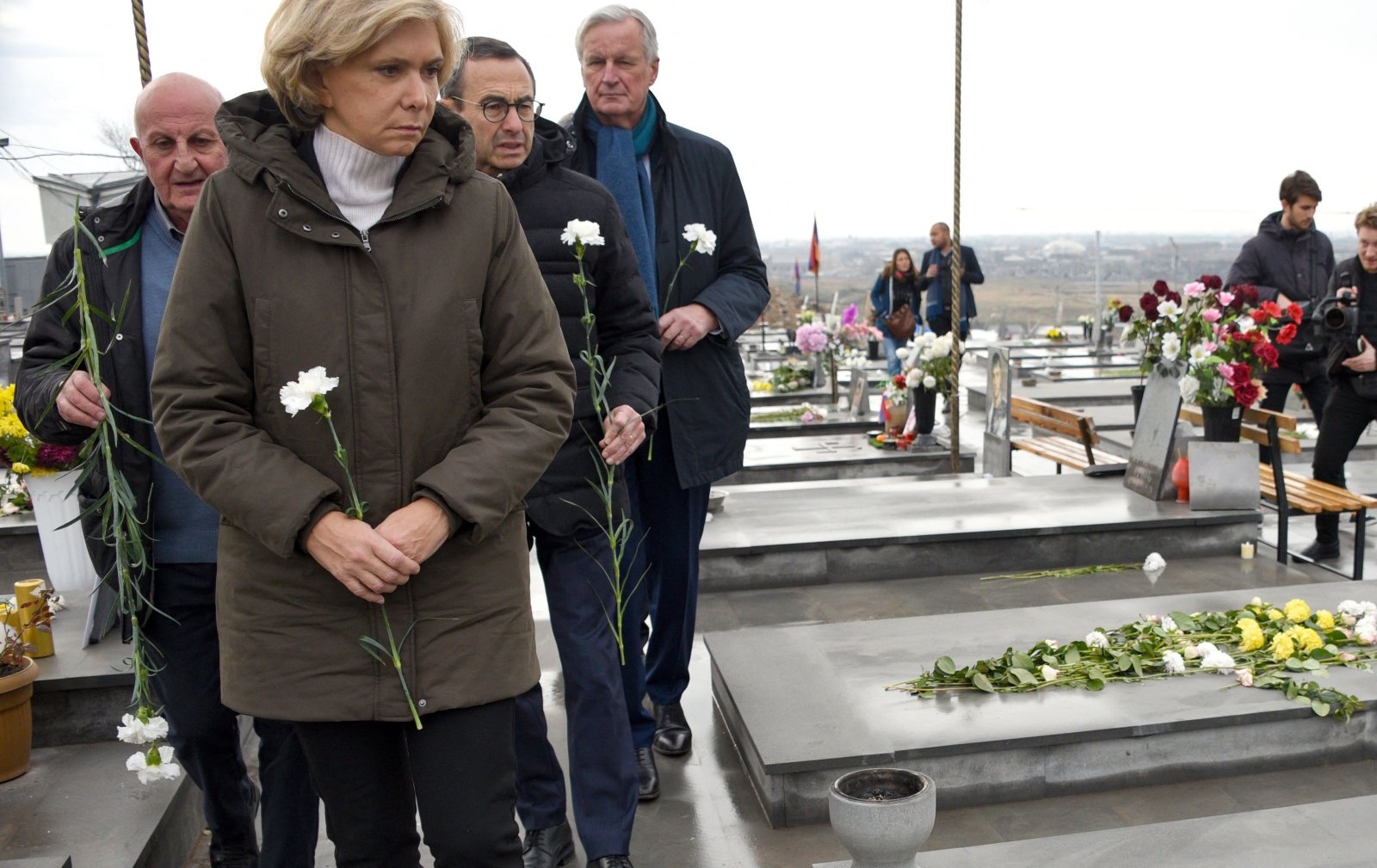 French presidential candidate Valérie Pécresse paid this week an illegal visit to the certain parts of Azerbaijan's Karabakh region, which are temporarily controlled by the Russian peacekeepers. President of The Republicans group in the French Senate, Bruno Retailleau, and European Commission Chief Negotiator for Brexit, Michel Barnier, have reportedly accompanied the presidential hopeful during the one-day trip to the city of Khankendi.

According to France Télévisions journalist Julien Nény, the visit took part covertly due to what was said to be “security reasons”.

“Valérie Pécresse visited Nagorno-Karabakh [the Karabakh region of Azerbaijan] today. She met local politicians there. [A] travel which for security reasons could not be covered by the majority of French media present in Armenia, including France TV,” Nény wrote in a Twitter post translated from French on Wednesday.

Pécresse’s illicit visit to the Karabakh region took place as part of her trip to Armenia’s capital Yerevan, which is aimed reportedly at luring the vote of the Armenian electorate in France in the upcoming elections. In Khankendi, she met with Arayik Harutunyan, the so-called head of the remnants of the Armenian criminal gangs in certain parts of the Karabakh region, who is wanted by Interpol as a war criminal upon the request of the Azerbaijani government. Pécresse’s illegal visit also included trip to the graveyard of the Armenian militants killed in the last year’s war with Azerbaijan, according to media reports.

Azerbaijan's Karabakh (Garabagh) region fell under Armenia’s occupation in the early 1990s during a bloody war that lasted until a ceasefire deal was reached in 1994. As a result, Armenia occupied 20 percent of Azerbaijan’s internationally recognized territories. Over 30,000 ethnic Azerbaijanis were killed, and one million were expelled from those lands in a brutal ethnic cleansing policy carried out by Armenia. Although the United Nations Security Council adopted four resolutions in 1993 demanding the immediate withdrawal of the occupying forces from Azerbaijani lands and the return of internally displaced Azerbaijanis to their ancestral lands, Armenia failed to comply with all four legally binding documents.

On September 27, 2020, the decades-old conflict between the two countries intensified after Armenia’s forces deployed in the occupied Azerbaijani lands shelled military positions and civilian settlements of Azerbaijan. During the counter-attack operations that lasted 44 days, Azerbaijani forces liberated over 300 settlements, including the cities of Jabrayil, Fuzuli, Zangilan, Gubadli and Shusha, from nearly 30-year-long illegal Armenian occupation. The war ended in a tripartite statement signed on November 10, 2020, by Armenia, Azerbaijan, and Russia. Under the statement, Armenia also returned the occupied Aghdam, Kalbajar, and Lachin districts to Azerbaijan.

The tripartite statement mandated also a five-year temporary service of a Russian peacekeeping contingent in the Armenian-inhabited part of Azerbaijan’s Karabakh region.

During the years of Armenian occupation of the Karabakh region, France served as one of three countries chairing the OSCE Minsk Group, a mediation structure tasked with fetching a peaceful end to the Armenia-Azerbaijan conflict. The Group’s shuttle diplomacy failed to deliver on its commitments, in addition, French authorities openly supported Armenia in the 44-day war with President Emmanuel Macron voicing solidarity with Armenia.

The illegal visit of presidential candidate Pécresse, who is known for her racist anti-Muslim rhetoric, to the Karabakh region hints at a stronger pro-Armenian position by Paris should she win the elections in April 2022. With her remarks in Yerevan on Wednesday, Pécresse has openly muddied the waters around the current situation in the Karabakh region, naming it an “ongoing conflict” despite Baku calling it finished and irreversible.