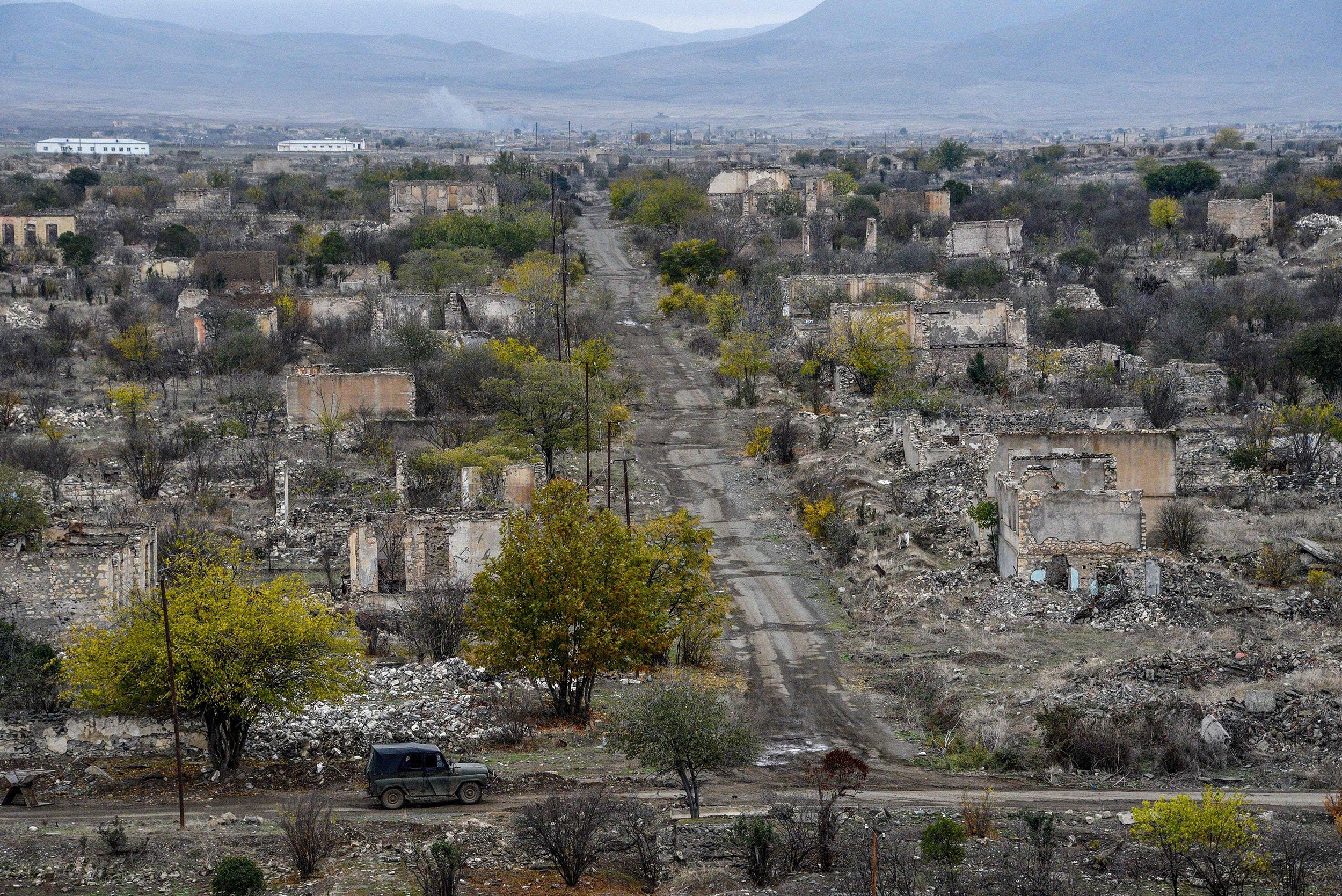 A car travels down a street of the deserted and ruined city of Aghdam, Azerbaijan / AFP Photo

A delegation from the Caspian Policy Center, a policy research think tank based in Washington, paid a visit to the war-torn Aghdam city of Azerbaijan last week, where it surveyed the damage done to the territory during Armenia’s decades-long occupation.

Member of the Center’s Advisory Board, and Former US ambassador to Azerbaijan Robert Cekuta described the scale of destruction in Aghdam as terrifying.

"These ruins testify to aggression against people," he told journalists in Aghdam. “It is good that these territories have been liberated from the occupation. However, the restoration of these territories will take a long time."

Cekuta, who served as Washington's ambassador to Azerbaijan in 2015-2018, wished Azerbaijan and Armenia to soon live in condition of good neighborliness and peace after the last year’s war between the two countries.

Armenian forces occupied a significant part of the Aghdam district, including the city of Aghdam and 89 villages, which comprised about 73 percent of the district's territory during the First Karabakh War on July 23 in 1993. The occupied areas were razed to the ground transforming the district into a ghost town. Only 10 villages of Aghdam remained under Azerbaijan's control following the occupation of its major part by Armenia. About six thousand residents of the district have been killed and 126,000 have been forcibly displaced in the wake of Armenia's attack.

Aghdam, located 362 kilometers west of the capital Baku, was one of the major cities of heavy, light, and food industries, as well as agriculture of Azerbaijan until it lost a larger part of its territory to Armenian invasion. An airport, a music technical school and a drama theater operated in Aghdam prior to the district's capture by Armenia. Thirty-eight collective and state farms, 24 construction-installation and 12 industrial enterprises, 74 schools, 105 healthcare facilities, 271 culture houses, 67 departments, and 99 clubs ceased their activities after the partial occupation of the district in 1993. Currently, the once occupied part of the district lies in ruins with no signs of life.

Aghdam has been dubbed the “Hiroshima of Caucasus” by local and international media due to the scale of the destruction in the city. Armenians turned it into the largest “home depot on the planet'' as they stripped all the buildings clean to use as building supplies. The city has also suffered a “mine terror” by the Armenian forces. It is one of the liberated districts of Azerbaijan that was mined heavily during the years of occupation.

The occupation of Aghdam ended after 27 years as a result of the six-week-long war between Armenia and Azerbaijan in the latter's Karabakh region in 2020.

The Armenian and Azerbaijani forces fought a 44-day bloody war in the Karabakh region, which lasted from September 27 through November 9, 2020. Hostilities between the two countries began after Armenian forces deployed in the once occupied lands of Azerbaijan shelled the Azerbaijani military positions and civilian settlements. Azerbaijani military took immediate counter-attack measures and successfully pushed back the offensive.

The Azerbaijani army liberated over 300 settlements, including the cities of Jabrayil, Fuzuli, Zangilan, Gubadli, and Shusha, from nearly 30-year-long illegal Armenian occupation. The war ended in a tripartite statement signed on November 10 by Armenia, Azerbaijan, and Russia. Under the agreement, Armenia also returned the occupied Aghdam, Kalbajar, and Lachin districts to Azerbaijan. Aghdam was the first Azerbaijani district that was liberated in post-war non-combat conditions set by the document.

The Azerbaijani government launched a large-scale reconstruction project in Aghdam. Restoration efforts come as part of the ongoing massive reconstruction campaign in the Karabakh region. Aghdam will reportedly regain its original view and see its residents back after the reconstruction.