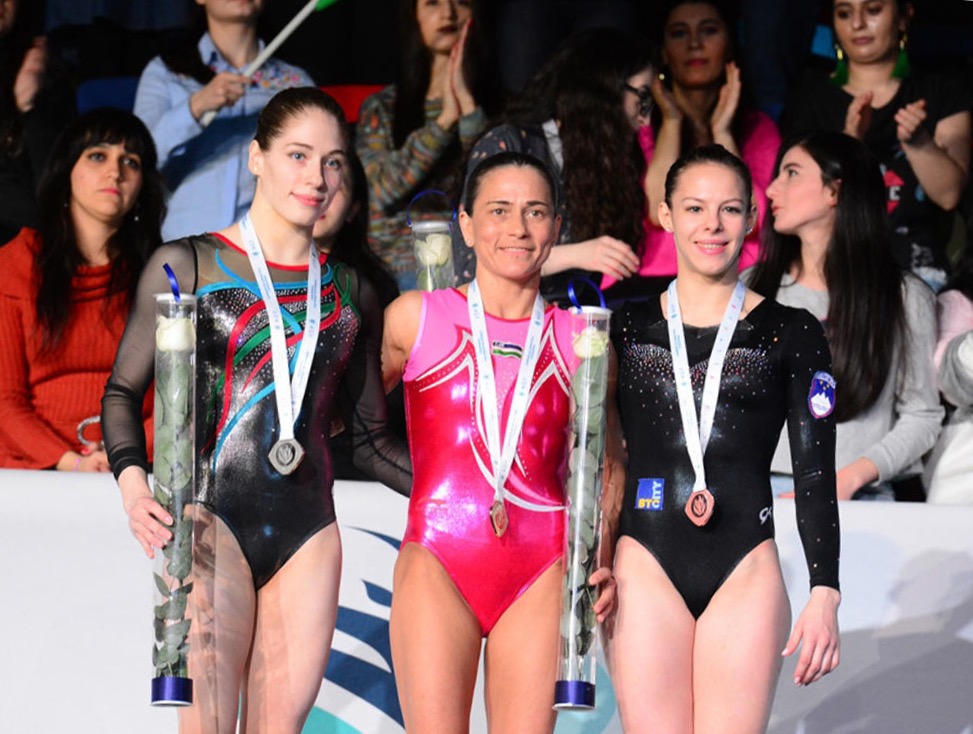 The National Gymnastics Arena, Azerbaijan’s largest gymnastics venue that was built in 2014, hosted the event, from March 15-18.

Being co-organized by the FIG and Azerbaijan’s Gymnastics Federation (AGF), the event brought together nearly 100 male and female athletes representing 25 countries, including Japan, Greece, Israel and Croatia, as well as Caspian region’s Kazakhstan, Iran and Azerbaijan.

Men’s artistic gymnastics included performances on the floor, pommel horse, rings, vault, parallel bars and horizontal bar. Women’s artistic gymnastics featured the floor, vault, balance beam and uneven bars. Qualification rounds in all disciplines were held on the first and second days of the World Cup, while those who qualified competed in the finals that were held over the weekend.

This year's stars included Eleftherios Petrounias from Greece, who grabbed gold at the 2016 Summer Olympics in Rio, and Uzbekistan’s female athlete Oksana Chusovitina – both silver medalists in the 2008 Summer Olympics Games held in Beijing. Both Petrounias and Chusovitsina triumphed in Baku, as they managed to grab golden medals in individual events.

Chusovitina, at age 42, brought her country a gold medal, having ranked first in the vault event. The silver medal was clinched by Azerbaijan's athlete Marina Nekrasova, who needed just 0.8 points to have overcome Chusovitina. The bronze medal went to Slovenia's Tjasa Kisselef.

"It's not the first time I've been participating in such competitions with Oksana, and I'm always very pleased to perform with her, because she's very experienced, and her support is as strong as mother's," Nekrasova told Caspian News after her performance on Saturday.

Iran and Kazakhstan were also represented in Baku but they failed to qualify for the finals.

Azerbaijan has played host to a series of international gymnastics competitions including the World Championships, European Championships, and World Cups. This year’s FIG World Cup is the third for the Caspian country, while the first one was held in 2016.

"For us every new competition is an experience, we are getting experienced over the years, and that is why the number of international competitions held in Baku is increasing," AGF Press Officer, Bika Abdullayeva told Caspian News.

Abdullayeva said that for the first time ever, Baku is going to welcome the 26th European Championships in Trampoline, Double Mini-Trampoline and Tumbling. Scheduled for April 12-15, the event will be attended by more than 400 athletes from 51 countries, while its medalists will automatically qualify for the Youth Olympic Games in Buenos Aires, and the Second European Games in Belarus.

The list of the major gymnastics events to be held in the capital of Azerbaijan also includes FIG Rhythmic Gymnastics World Cup scheduled for April 27-29, which will become the sixth for Baku.

The next stage of the FIG Artistic Gymnastics World Cup will be held from March 21-24 in Qatar according to FIG’s provisional calendar.