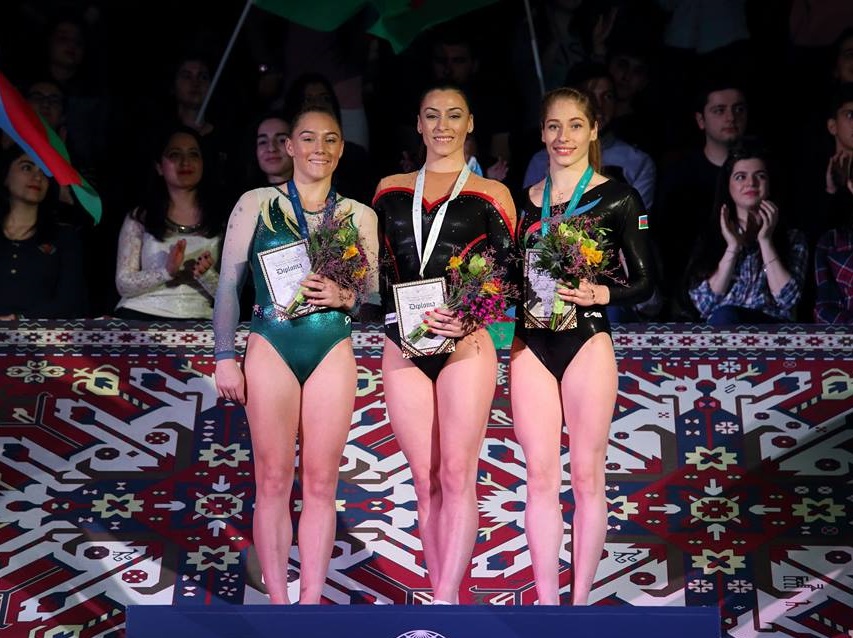 It is her second World Cup medal after earning a bronze in 2016.

Nekrasova started Saturday’s final with a performance on the vault that had her in fourth place with 13.700 points. Performing the floor exercise on Sunday’s final, she finished third with 12.833 points, behind three-time Olympic Champion, Romanian Catalina Ponor (13.433) and Australian Emily Little (13.400).

Winner From The Land Of The Rising Sun

At 22 years of age, Naoto Hayasaka of Japan competed in Baku and took home a gold medal for his performance on the horizontal bar. There he scored 14.333 points, leaving behind Croatian Anton Kovacevic (14.000) and Lithuanian Tomas Kuzmickas (13.866). Hayasaka also ranked third following Saturday’s final floor exercises.

“The next major championships [FIG Individual All-Around World Cup 2018] will be held in Tokyo, in my country,” Hayasaka told Caspian News. “The gold medal I earned here in Baku increases my self-confidence for that competition.”

Hayasaka shared his impressions on the venue, and the host city, Baku.

“The gymnastics arena in Baku is great, I liked it. And although Baku doesn’t resemble Tokyo at all, I liked the city very much.”

A Step Away From Victory: The Best Pommel Horse Worker of All Time

Hungarian athlete Krisztian Berki, age 32, finished first and qualified to perform on the pommel horse in Sunday’s finals. However, the man considered to be the best pommel horse worker of all time by FIG stepped back in the finals and finished second, scoring 15.266 points. Chinese Hao Weng ranked first, scoring 15.400, while Croatian Filip Ude, a 2008 Olympic silver medalist, finished third with 15.200 points.

In his interview with Caspian News, Berki said he was pleased with his performance in what was his first visit to Baku.

The XXXII Olympic Summer Games will be held in Tokyo, Japan, from July 24 through August  9, 2020.

Baku, The Capital Of World Gymnastics

Azerbaijan has played host to a series of international gymnastics competitions, including World Cups and European and World Championships. This year’s FIG Artistic Gymnastics World Cup AGF Trophy, held at the National Gymnastics Arena, brought together 120 male and female athletes from 21 countries.

Farid Gayibov, Secretary General of Azerbaijan Gymnastics Federation and Vice President of the European Gymnastics Union, believes that Baku has already turned into the capital of world gymnastics.

“I think we’ve managed to hold the competition at a high level. Late this April we are going to host the World Cup in Rhythmic Gymnastics. Then, the international gymnastics council will convene in Baku. The Islamic Solidarity Games will kick off in Baku,” he noted, which take place from May 12-22.

“I think Baku will turn, or it has already turned, into the world’s gymnastics capital.”