Fate of OSCE Minsk Group in Question After US, France Cancel “Troika” Format 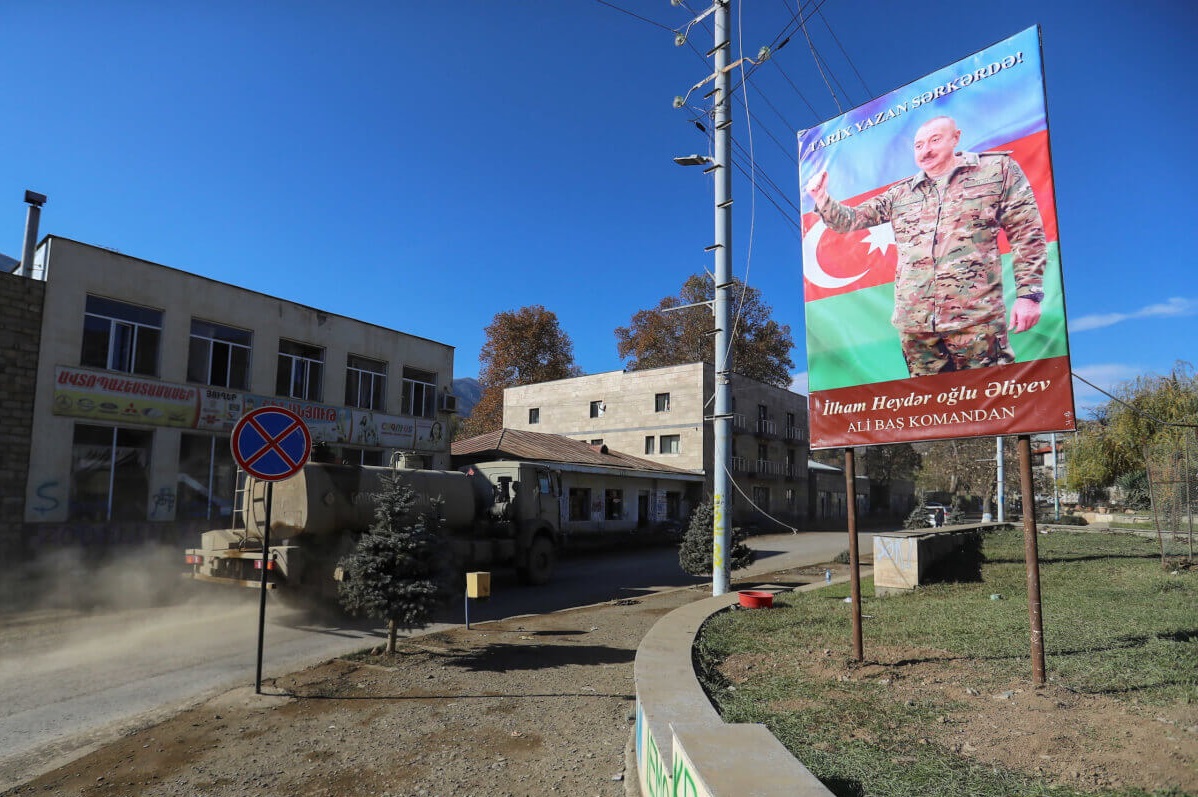 A board with an image of Azerbaijan's President Ilham Aliyev is on display in Hadrut town, liberated by the Azerbaijani forces from Armenian occupation in 2020, November 25, 2020 / Aziz Karimov / Reuters

Russian Foreign Minister Sergei Lavrov said the United States and France rejected to work with Russia within the Minsk Group of the Organization for Security and Cooperation in Europe (OSCE), a trio of diplomats that had been working to mediate political negotiations between Armenia and Azerbaijan over conflict in the latter’s Karabakh region.

“As for the activities or the future of the “troika” of the co-chairs of the OSCE Minsk, I don’t know what the future will be, because our so-called French and American partners in this group (...) canceled the "troika" of the OSCE Minsk Group co-chairs, saying that they will not communicate with us in this format," Lavrov said in a press conference after a meeting with his Armenian counterpart on Friday, per Interfax.

The Russian minister’s comments come at a time when Armenian authorities are trying to involve the Group in talks on a peace agreement with Azerbaijan. In March, the Armenian foreign ministry reportedly asked the OSCE Minsk Group to organize negotiations. Yerevan described this move as a “positive response” to a proposal submitted by Azerbaijan for normalizing bilateral relations through an ultimate peace treaty.

Conflict between Armenia and Azerbaijan over the latter’s Karabakh (Garabagh) region emerged in the early 1990s. Following a rise in anti-Azerbaijan rhetoric, Armenia launched a full-blown military campaign against Azerbaijan in 1991. Azerbaijan’s internationally recognized lands, comprising 20 percent of the country’s sovereign territory, fell under Armenia’s occupation in the wake of the war that ended in a ceasefire in 1994. Armenia's armed forces killed over 30,000 ethnic Azerbaijanis and displaced one million in a brutal ethnic cleansing campaign.

The United Nations adopted four resolutions at the height of the war in 1993 demanding immediate and unconditional withdrawal of Armenia’s forces from the occupied lands. However, Armenia has not abided by the resolutions, dashing hopes for a political resolution and simultaneously preparing for the next military phase of the conflict.

The OSCE Minsk Group assumed the role of mediator in the conflict in 1992. Diplomats from the US, France, and Russia served as the Group's co-chairs to spearhead international efforts for finding a durable solution to what once was one of the most dangerous regional conflicts. Despite decades-long shuttle diplomacy conducted by the group co-chairs, negotiations remained dead in the water without any breakthrough.

Ineffective negotiations and unproductive mediation by the OSCE Minsk Group over the decades exhausted Azerbaijan. In July 2020, shortly before the start of a bloody war between Armenia and Azerbaijan in the latter’s Karabakh region, President Ilham Aliyev accused the Minsk Group of inaction regarding Armenia’s illegal occupation of Azerbaijani lands. He said the co-chairs did not take adequate measures despite provocative statements made by Armenian leaders, including illegal claims that Karabakh belonged to Armenia. Yerevan also tried to change the format of negotiations mediated by the Minsk Group by proposing to involve the separatists in the occupied Azerbaijani lands as a party to political talks.

On July 12, 2020, Armenian forces launched an offensive on Azerbaijani army positions in the country’s western Tovuz district on the Armenia-Azerbaijani state border. Intense clashes lasted four days until July 16 claiming the lives of 12 Azerbaijani servicemen, including a general and a colonel.

The 2020 July clashes spawned Armenia’s next attack against Azerbaijan in September 2020, which ended up in a full-scale war the region had not seen since the 1990s.

On September 27, 2020, the Armenia-Azerbaijan conflict took a violent turn when Armenia’s forces deployed in occupied Azerbaijani lands shelled military positions and civilian settlements of Azerbaijan. During counter-attack operations that lasted 44 days, Azerbaijani forces liberated over 300 settlements, including the cities of Jabrayil, Fuzuli, Zangilan, Gubadli, and Shusha, from a nearly 30-year-long illegal Armenian occupation. The war ended with the signing of a tripartite statement by Armenia, Azerbaijan, and Russia on November 10, 2020. Under the agreement, Armenia also returned the occupied Aghdam, Kalbajar, and Lachin districts to Azerbaijan.

In a meeting with the OSCE Minsk Group in December 2020, President Aliyev said the Group failed to resolve the conflict between Armenia and Azerbaijan despite its mandate to mediate a political solution.

“Although there has been an activity of the Minsk Group in elaborating ideas and trying to be creative, there was no result. And this is a reality. Therefore, Azerbaijan resolved it itself,” President Aliyev said in a meeting with the Minsk Group co-chairs, referring to war in the Karabakh region in 2020.

On his part, Baku-based political observer Agshin Karimov said Azerbaijan has repeatedly declared its distrust of the OSCE Minsk Group and Lavrov’s comments marked the “funeral” of the Group.

“For Azerbaijan, the most important factor is Turkey. And if the institution of co-chairing is not abolished and only its format changes, Turkey may well become one of the co-chairs,” Karimov added.