F1 Races To Continue In Baku For Another 5 Years 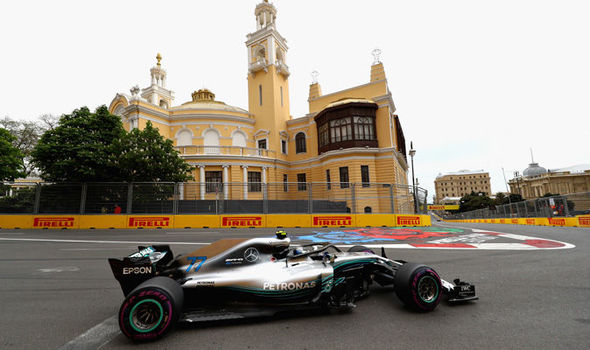 In 2018, Baku welcomed more than 90,000 racecar fans over the span of a weekend, or roughly one-third more than what the Azerbaijani capital saw pour in during 2017’s race, according to Formula 1 organizers. / Express.co.uk

Formula One racing is not leaving Azerbaijan anytime soon. The world’s premier motor sport competition has extended an agreement for three years that will keep the Baku City Circuit – used for annual F1 race car events – busy with some of the world’s best motor sport racing drivers through 2023.

Azad Rahimov, Azerbaijan’s Youth and Sports Minister, characterized the agreement as a win-win.

“The new agreement will allow us to receive significantly more dividends, compared with the previous one,” Rahimov said on Tuesday, according to reports by Media.az.

Under the new agreement Azerbaijan is allowed to use the logo of the title sponsor on billboards placed along the racetrack that winds through Baku’s UNESCO-protected Old City, and to expand commercial opportunities along the seaside boulevard, hopefully attracting local companies to sponsor F1 races.

Since 2016 Baku has hosted three-day F1 races each year, held on what is said to be the fastest street circuit in F1 racing, designed by renowned track architect Hermann Tilke. The Baku City Circuit runs through the old city, whips past the city’s modern skyline, and traverses the Caspian Sea promenade.

For example, the extremely narrow uphill section of the circuit near the old town wall scores drivers some point for accuracy, while the 2.2 kilometer-long portion that runs the length of the promenade allows cars to reach top speeds. The toughest point on course is its narrowest, measuring just 7.6 meters wide. The track features 20 turns, and eight of them are 90-degree turns.

"The last few years have been a dream come true for the people of Baku as we have seen our race weekend grow from a simple idea into one of the most dramatic and exciting race weekends in F1’s history. Already, we have played host to some of the sport’s most iconic moments,” the minister said on Tuesday, according to reports by Report.az.

In 2018, Baku welcomed more than 90,000 racecar fans over the span of a weekend, or roughly one-third more than what the Azerbaijani capital saw pour in during 2017’s race, according to Formula 1 organizers.

Formula One Group executive chairman and CEO Chase Carey says Azerbaijan Grand Prix is one of the most beloved races for motor racing fans.

“We conducted a study for the season of 2018. Baku gained the greatest fame among all stages of the Formula 1 races. This is especially emphasized by the fans,” Carey said on Tuesday.

“We consider this year’s edition remarkable because of new pilots and other innovations.”

Twenty-one competitions are planned for the 2019 F1 racing calendar at venues around the globe. The season will kick off in Australia on March 17 and end in Abu Dhabi on December 1, 2019. Eleven of the 21 races will come down in the streets of Europe, five in Asia, four in the Americas and one in Australia. The 2019 racing season is extra special, as the 1,000th Grand Prix race will take place.