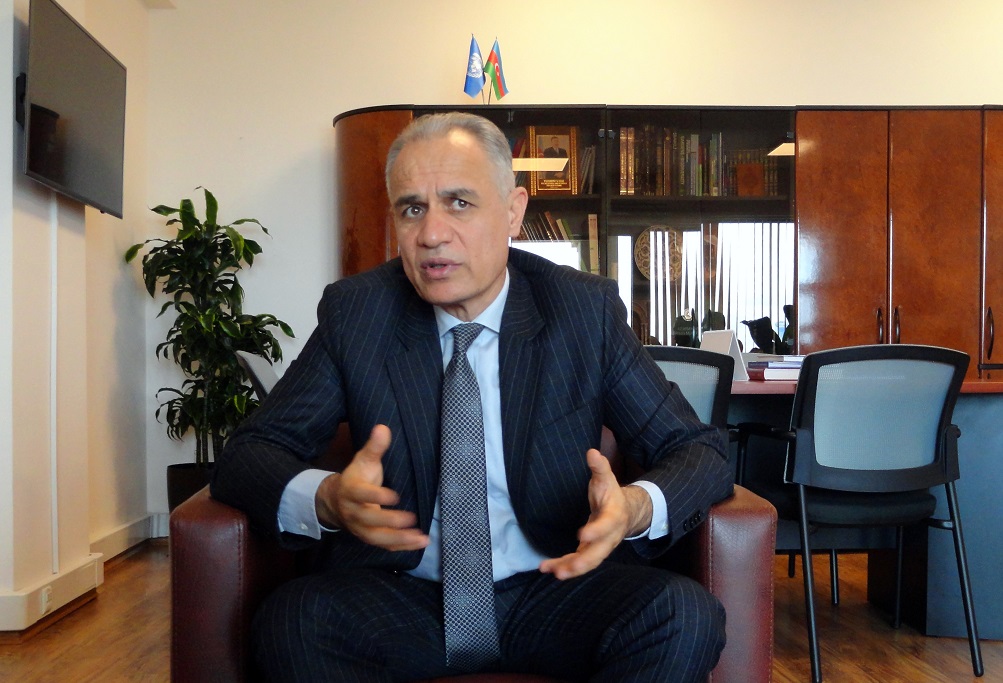 Ghulam Isaczai sat down for an exclusive interview with Caspian News in Baku, where he delivered in-depth overview of the current situation and future potential of UN-Azerbaijan cooperation, including Azerbaijan's commitments to Millennium Development Goals and Sustainable Development Goals set by the UN / Caspian News

Q: The United Nations has been cooperating with Azerbaijan since1992 through its various organizations and programs, including UNDP, UNESCO, WHO, UNICEF, UNEP, WFP, UNFPA and others. Azerbaijan is delivering on commitments related to Sustainable Development Goals of the UN, as well. What are the benefits to the UN in having such in-depth cooperation with Azerbaijan?

We look at our cooperation in three stages: The year we established our mission, unfortunately coincided with the conflict, the conflict in the Nagorno-Karabakh region of Azerbaijan. And therefore, our support was primarily humanitarian. We provided a lot of support to refugees, to the displaced people and again our support consisted of food aid, health support, shelters and so on. Again, this was the time that Azerbaijan was not very rich as it is today. Therefore, they depended a lot on the UN system. We are very proud to say that we were able to provide assistance to Azerbaijan.

As the conflict, I wouldn’t say ended, but as the situation is stabilized, we started more institutional building. We started supporting Azerbaijan’s government and we launched a lot of training to civil servants, we provided a lot of policy support, because we wanted to make sure that Azerbaijan established itself as a stable state that can deliver services. That was the second phase of our support.

Then in the year 2000 we had the Millennium Development Goals. That was adopted at the United Nations in New York and Azerbaijan also committed to achieving seven goals, which were to reduce poverty, hunger, maternal mortality, infant mortality and provide environmental sustainability and etc. So, our support shifted to more long-term institution building, capacity building and so forth. We were able to contribute to Azerbaijan in achieving most of these goals, which were from 2000 to 2015, for 15 years. We looked at this period and realized that Azerbaijan achieved a lot. 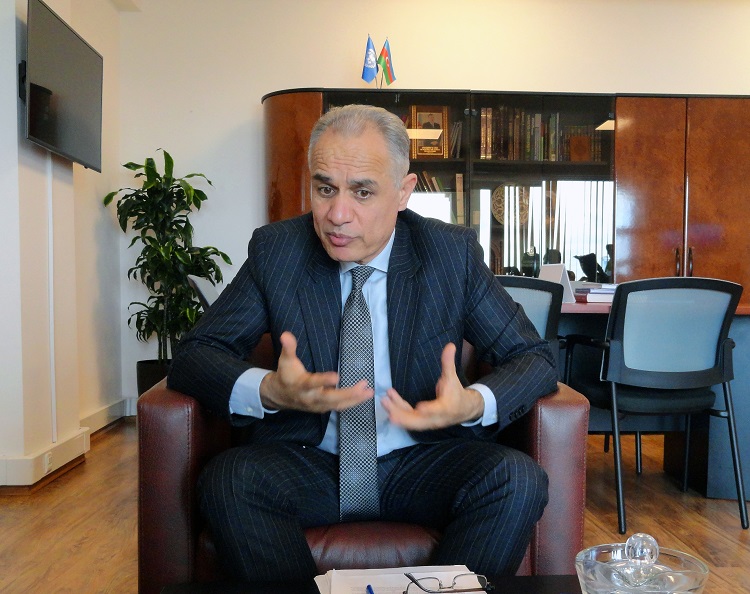 Ghulam Isaczai worked with the private sector in the United States (1993-1995) and held positions with international NGOs such as Save the Children (USA), Freedom Medicine and Swedish Committee for Afghanistan (1986-1990) / Caspian News

Q: Azerbaijan has successfully implemented the obligations it took upon under the Millennium Development Goals, up to 2015, which varied from achieving a stable macroeconomic environment in the country to eradicating extreme poverty. Now, Baku is posing to build on those achievements as part of its support of the Sustainable Development Goals. What are your expectations from Azerbaijan during this period?

A: I think Azerbaijan will achieve a lot. Let me give you some of the benefits and differences between the Millennium Development Goals (MDGs) and Sustainable Development Goals (SDGs). SDG are different in several ways. One, we are now much more comprehensive. In the MDGs we had seven goals; in the SDGs we have 17 goals. So, we have ten more goals added, which means that we are basically covering more than we covered in the MDGs. The other fundamental difference of the SDGs is that it is universal. The MDGs were primarily targeting poor countries, or I would say least-developed, middle-income, upper middle-income countries, it did not really cover the western countries. But the SDGs are universal, all the countries, whether it is Germany, Denmark or the U.S., they all have committed to achieve those.

For example, if we’re talking about gender equality, let’s not forget that gender equality is still an issue in many countries. If we’re talking about children rights, youth empowerment, human rights – these are universal values that everyone has to aspire and try to achieve them. When the MDGs were created there was a feeling among countries that why are we committed and obligated to do this, but not the western countries. That’s why the SDGs are really important, it is a universal agenda. It is a very important document for the world.

How Azerbaijan can benefit from the SDGs? It can benefit in several ways. One is that Azerbaijan is very dependent on carbon industry: gas and oil. The SDGs can help Azerbaijan diversify its economy. We are saying look at the other ways of diversifying the economy. Secondly, we are also suggesting that by investing in alternative energy, such as solar, wind and others you can prolong the life of your oil wells. Instead of 50 years it could last for 80 years or maybe 100 years. Plus, you can get a clean environment and contribute to global efforts to reduce sort of carbon emissions and so forth.

The other important difference in the SDGs would be called inclusive growth or equality. You see many countries have achieved a growth. Let’s use China as an example. But do you think that all the members of the society benefit from it? So, that’s why we say that by adopting the principles of the SDGs you will achieve a growth that will benefit every member of the Azerbaijani society. It will include everyone – women, children, young persons, everyone is going to benefit from the growth. To do that, there are specific policies, specific regulations that you need to put in place. Because an inclusive society is a happy society. This is the message of the SDGs where we say, “leave no one behind.” That’s the slogan, that’s the primary message. That means no woman, no child, no young girl, no old person should be left behind, everyone should benefit, like a big family.

We all acknowledge that Azerbaijan has achieved a lot. It is an upper middle-income country. Can it benefit more? Of course, it can. There is always room for improvement. Here we are as the United Nations to basically help Azerbaijan invest more in the social sector, not just, I would say, in the hard economic sector. Let’s say invest in health, education, women empowerment, young people, because these are the future, these are the people, these are the future generation. That’s actually the primary message, the primary reason that we are now supporting in many countries, including in Azerbaijan on the SDGs.

Now, let me come to what we are doing now, specifically. First of all, we very much appreciate and we thank the leadership, in particular the president of Azerbaijan Ilham Aliyev for issuing a decree for establishing the National Coordination Council for Sustainable Development under the chairmanship of Deputy Prime Minister Ali Ahmadov. This council was established to coordinate the work of the government to basically define how to adopt the SDGs targets and indicators. There are 17 goals, 169 targets and over 240 indicators. All of it may not be applied in Azerbaijan. This is a menu, each country has to say, “ok out of these 17 goals these five are priority for us and these five we need to do better” or the same for 169 targets. This is how we are now providing this technical assistance to help the Council and the government to prioritize these goals and targets, and to also align their national indicators with global SDGs indicators.

Q: How can Azerbaijan and UN bring their already good relations to higher levels?

A: I think what is important for us to look at Azerbaijan that is not the Azerbaijan of 20 years ago, 25 years ago. Azerbaijan is now categorized as the upper middle-income country which puts it at a different group of countries where the UN has to find a new way of engagement. The kind of expertise that we bring to Azerbaijan has to be targeted and highly technical. Because Azerbaijan doesn’t need a great deal of humanitarian assistance anymore, like we did before. Azerbaijan probably doesn’t need projects and programs that we used to support, because they can do it themselves now. The country has evolved into a state, it has the capacity.

I would say there are several areas we can add value. One is what we call the UN Normative Agenda. It means that Azerbaijan has signed a lot of international conventions, declarations and committed itself to implementing them. Now, how can the UN help Azerbaijan meet its commitments under these conventions, whether it is human rights, governance, and environment? For instance, the government of Azerbaijan has signed the Paris Declaration on environment. Now, what is that mean? There is a whole set of protocols, policies and changes you have to make to your legislation to make sure that as a country Azerbaijan complies with some of the international targets. This is where the UN has a lot of value, because we have this expertise. And our expertise comes free of charge, neutral and impartial. Because we are not a company, a government or even a regional organization. We are a global organization which Azerbaijan is a member of. Our added-value is always in our neutrality, because our support comes unconditionally. We are not here to say, “if you do this, we’ll give you this” or “if you don’t do this, we will pull out.”

Q: Azerbaijan’s President Aliyev met in October with Armenia’s President Sargsyan. This event has become another step that has been taken throughout more than 20 years in a bid to resolve the long-lasting conflict. What do you believe are the necessary and immediate “next steps” that need to happen to move towards a resolution of the Nagorno-Karabakh conflict between the two countries?

A: The UN has a profound interest in the peaceful negotiated settlement of the conflict. There is a mechanism for negotiating, which we call the Minsk Group. The UN very much supports that process from the very beginning because it is the part of the UN resolutions. Our Secretary General has made it clear that we believe that the ongoing dialogue and negotiations is a very good way to basically reduce tensions and prevent further violence. Because any further violence has consequences. One child or one soldier or one person dying is too many. We believe in the peaceful resolution of the conflict, we encourage both sides. Our Secretary General after the presidential summit in Vienna last time made encouraging statement to support this. The UN is always there to provide any technical assistance, any support to make its expertise available to both sides or to the Minsk Group in terms of proceeding with the negotiations. So, we hope that the ongoing dialogue continues. Because it is only dialogue that creates understanding and helps people to find mutual solutions.