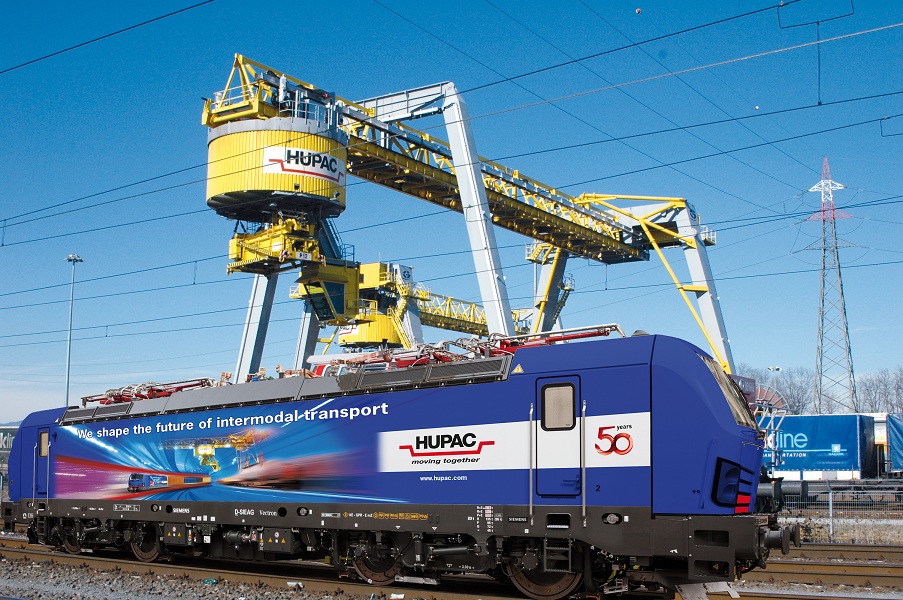 “As of 12 February 2018, Intermodal Express [Russia], in cooperation with ADY Container [Azerbaijan] and Hupac Intermodal will connect networks between Europe and Iran, Azerbaijan, Turkmenistan and Kazakhstan,” reads a statement published on the official website of Hupac.

Hupac dispatches around 110 freight trains per day, moving containers and swapping semitrailers to various overland and maritime destinations in Europe and Asia.

According to the new service route map, Hupac connects Iran and Europe via a direct overland link across Poland, Ukraine, Turkey and other countries, while the new intermodal hub in Azerbaijan’s capital Baku is to serve as the primary maritime link to reach the networks in Kazakhstan and Turkmenistan.

A large intermodal connection area stretches from destinations in Azerbaijan, Iran, Turkmenistan and Kazakhstan to all of the main European industrial clusters in Germany, Benelux zone, Italy, Poland and Spain.

The Hupac Group is the largest intermodal network operator in Europe. Its network includes connections from the main European economic areas to destinations as far as Russia and the Far East. The Group includes 17 companies across Eurasia, with headquarters located in Switzerland, Italy, Germany, the Netherlands, Belgium, Poland, Russia and China.

Intermodal freight transport comprises deliveries of cargo in an intermodal container or vehicle, using multiple modes of transportation such as rail, ship, and truck. Freight does not undergo any handling procedure during the change of transportation modes, which helps reduce the cost of deliveries, cargo handling, and damages, as well as provide security and a faster move of the freight.

As one of five countries surrounding the Caspian Sea and at the heart of the South Caucasus, Azerbaijan stands at the juncture of major air, sea, rail and road routes within Eurasia, including the Trans-Caspian International Transport Route (TITR), the North-South and East-West routes, and the Baku-Tbilisi-Kars (BTK) railway. The intermodal transport network in Baku consists mostly of the BTK railroad and the Baku International Sea Trade Port.

The BTK has been in operation since October 2017, and traverses Azerbaijan and Georgia before reaching eastern Turkey, in Kars. There the line gets incorporated into the railway grid of the country, moving westward to Europe. The overall cargo transportation capacity of the BTK is between three and five million tons per year, but is expected to reach 17 million by 2023.

The Baku International Sea Trade Port, known also as the Port of Baku, is the largest trade port along the Caspian Sea. Scheduled to come online later this year, it will serve as a major transit hub in the Caspian and Central regions, ultimately benefiting all of Eurasia as goods move westward from China. The complex is located in the Alat trade and industrial area in Azerbaijan, situated about 70 kilometers (43 miles) south of the country’s capital city. A roll-on/roll-off (Ro-Ro) cargo terminal was launched there in January, which is capable of receiving up to 60,000 cargo trucks and 1.8 million tons of freight annually.

Alat combines almost all of the main international rail and maritime routes into and from Azerbaijan in a single point, including the northwestern Baku-Russia-Baku, the western Baku-Georgia-Turkey-Baku, the southern Baku-Iran-Baku, the eastern Baku-Kazakhstan-Baku and Baku-Turkmenistan-Baku routes. These all put Azerbaijan in the center of routes that link Turkey and Europe in the west to Iran and India in the south; Russia to the north; and Central Asia and China to the east.