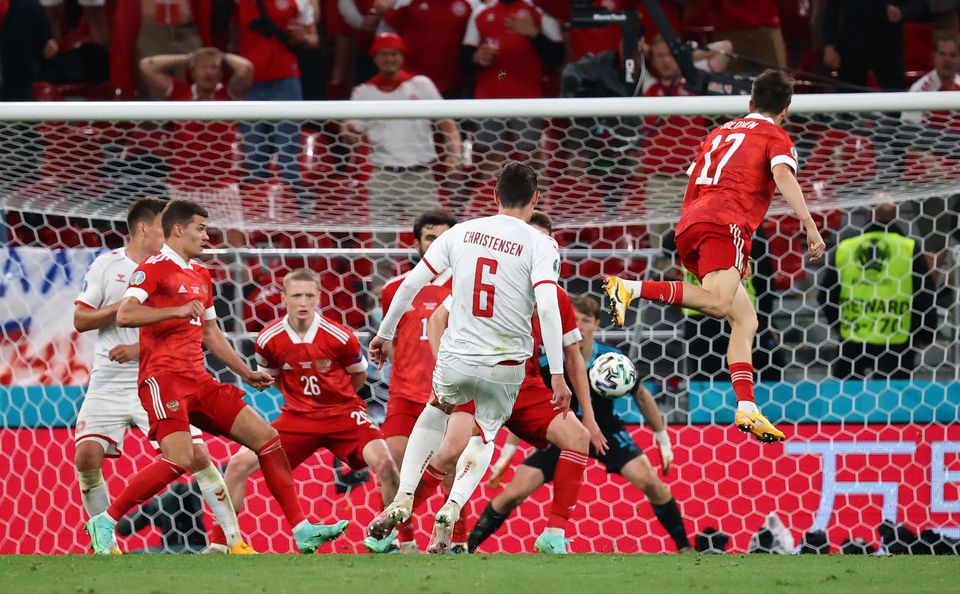 On Monday, the team coached by Stanislav Cherchesov crashed out of the tournament in its third and last group game, which ended with a score of 4:1 in the Danes’ favor. / Wolfgang Rattay / Reuters

Russia’s national football (soccer) team lost its ticket to the round of 16 of the 2020 UEFA European Football Championship after a massive defeat against Denmark.

On Monday, the team coached by Stanislav Cherchesov crashed out of the tournament in its third and last group game, which ended with a score of 4:1 in the Danes’ favor. The match took place at the Parken Stadium in Copenhagen, Denmark — one of 11 co-hosts of the prestigious football tournament.

Russian national football team made a positive start and were nearly rewarded when attacking midfielder Aleksandr Golovin dribbled through the center of the Denmark defense from halfway. However, the confidence of the Russian team disappeared when Mikkel Damsgaard scored a goal for the Danish team in the first half of the game. In the 59th minute, Yussuf Poulsen doubled Danish advantage when he intercepted a Roman Zobnin back pass and broke in all alone on the goal.

Russia got back into the game when Artem Dzyuba converted a penalty, but their reprieve would not last for long. In the 79th minute, Andreas Christensen scored a goal, and two minutes later, Joakim Maehle completed the scoring, securing a memorable victory for their country.

After Monday’s defeat, Russia fell to fourth place in the group and was eliminated from the tournament. The outcome was a major disappointment after Russia reached the last eight in the World Cup on home soil three years ago.

Cherchesov, who nearly guided his nation to the 2018 World Cup semi-finals, believes that the Russian football team lacks tournament experience.

Meanwhile, a 4-1 victory over Russia sent Denmark to the knockout stages. Denmark’s first win in Group B was enough to lift them to the second spot above Finland and Russia.

The Danes came into the match with no points from their first two matches, but a victory over Russia guaranteed them a passage from the group as the second-placed team. Denmark will face Wales in the last 16 in Amsterdam on Saturday.

Euro 2020 is the ultimate football championship of national teams in Europe. The tournament was initially scheduled to take place from June 12 - July 12, 2020, in twelve cities, including Russia’s second-largest city St. Petersburg and Azerbaijan’s capital Baku. However, the UEFA decided to postpone the tournament for a year amidst the outbreak of the novel coronavirus.

This year the tournament runs between June 11 and July 11, 2021, in 11 cities across the continent. Along with Russia and Azerbaijan, the tournament’s games are played in Italy, Denmark, Netherlands, Romania, England, Scotland, Spain, Germany, and Hungary.