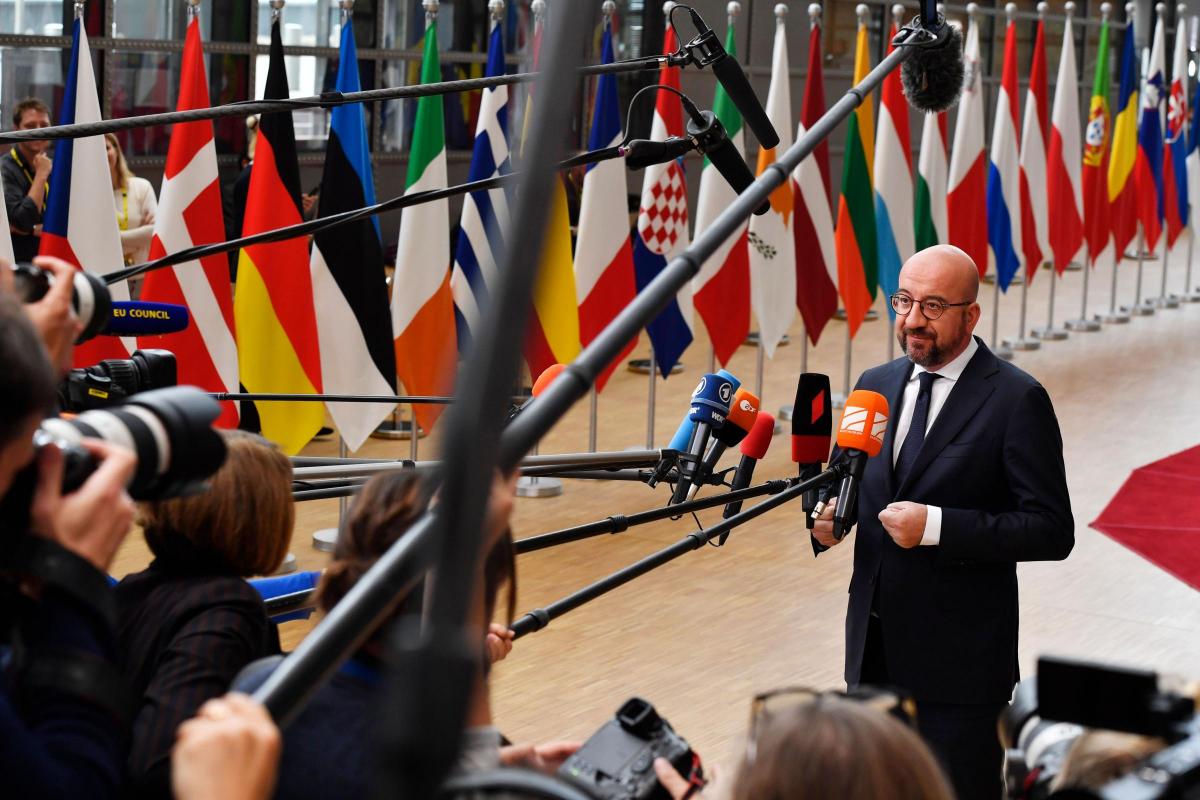 European Council President Charles Michel speaks to the media prior to the extraordinary meeting of EU leaders to discuss Ukraine, energy and food security at the Europa building in Brussels on Monday

European Union leaders have agreed to embargo most Russian oil imports into the bloc by year-end as part of the sixth and toughest sanctions package against Moscow.

After hours of intense discussions over a complete ban on Russian oil at a meeting in Brussels on Monday, leaders of the 27-nation bloc agreed on a compromise deal to cut two-thirds of Russian oil imports, resolving a deadlock with Hungary.

Following opposition from Hungary, the ban will only affect oil that arrives by tankers. At the same time, an exemption will be made for the southern segment of the Druzhba pipeline that serves Hungary, Slovakia, and the Czech Republic. Hungary is 65 percent dependent on Russian crude supplied via Druzhba, the world’s longest oil pipeline running from Russia to various points in eastern and central Europe.

In a video post published on his official Facebook page after the meeting, Hungary’s Prime Minister Viktor Orban declared the agreement a victory for his country. He told Hungarians they could sleep soundly - protected from expensive fuel costs that the embargo would bring to the rest of Europe.

“We succeeded in defeating the proposal of the European Council which would have forbidden Hungary from using Russian oil,” Orban said.

EU Commission President Ursula von der Leyen said the move “will effectively cut around 90 percent of oil imports from Russia to the EU by the end of the year” as Germany and Poland, who receive Russian oil through the northern segment of the Druzhba pipeline, had committed to renouncing deliveries via the pipeline to their territory.

The oil embargo is aimed at depriving Moscow of a major revenue stream. According to Bloomberg calculations, the ban on seaborne supplies would cost Russia up to $10 billion a year in lost export revenue since it would reportedly force the country to sell its crude at a discount to Asia, where it’s already changing hands at about $34 a barrel cheaper than the price of Brent futures.

“This immediately covers more than two-thirds of oil imports from Russia, cutting a huge source of financing for its war machine,” European Council chief Charles Michel tweeted during the summit. “Maximum pressure on Russia to end the war.”

Russia’s Permanent Representative to International Organizations in Vienna, Mikhail Ulyanov, responded to the EU’s decision on Twitter, saying that Russia will find other importers.

“Noteworthy that now she contradicts her own yesterday’s statement,” Ulyanov wrote, echoing Leyen’s earlier statement. “Very quick change of the mindset indicates that the EU is not in good shape.”

The move came as a part of the Western response to what the Kremlin calls a “special military operation” in Ukraine. President Vladimir Putin ordered a full-scale invasion of Ukraine on February 24, shortly after he recognized the so-called Donetsk and Lugansk People’s Republics as independent entities. Russia claims that its “special military operation” in Ukraine aims to protect the people of these territories allegedly being attacked by the Ukrainian military.