Turkey’s decision to purchase the S-400 Triumf anti-aircraft missile system from Russia has raised eyebrows in Washington, given that Turkey is a member of NATO. But President Recep Tayyip Erdogan believes that the deal will strengthen the western military alliance.

“The acquisition of the S-400 air defense system will greatly affect NATO. It should be happy from this,” HaberTurk quoted Erdogan as saying on Sunday, calling Turkey the “most powerful pillar” of the alliance in the region.

“And if such a mandatory country as Turkey, having received S-400, will become stronger in its security area, who will also be stronger? This will strengthen the alliance itself,” he said, calling the S-400 deal the most important in Turkish history right now.

Ankara’s plan to purchase the Russian-made system, which is designed to destroy aircraft, cruise and ballistic missiles, and ground target objectives, has soured its decades-long strategic relationship with the United States especially, which has been pressuring the Turkish government to abandon the deal, worth over $2 billion, with Russia and instead purchase the American-made Patriot system. American officials are concerned that the S-400 Triumf may compromise its F-35 jet planes, which Turkey also plans on buying.

Lawmakers in Washington have threatened to pull Turkey out of the F-35 jet program and impose sanctions as a punishment if the Russian deal goes through. But Ankara has already received parts comprising the S-400 order.

Citing people familiar with the matter, Bloomberg reported that the Trump administration has prepared a sanctions package as a punishment for Friday’s deliveries, under the Countering America's Adversaries Through Sanctions Act (CAATSA), a 2017 Congressional bill penalizing entities doing business with Russia.

“The United States acts outside any mutually respecting agreements of various states, but acts on the basis of unhealthy competition within the framework of military-technical cooperation,” RIA Novosti quoted Shvytkin as saying.

In June, Erdogan told reporters that Washington’s threats of sanctions would never materialize.

“We have heard from him [Trump] personally that this would not happen,” Reuters quoted the Turkish leader as saying on the sidelines of the Group of 20 summit in Osaka on June 29.

The Russian-made S-400 Triumf surface-to-air missile system is an anti-aircraft weapon system that can hit targets and travel distances between 40 km (25 mi) and 400 km (249 mi). 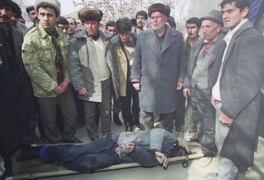 “My children froze to death in my hands,” said one survivor. “I would rather be dead than withst...