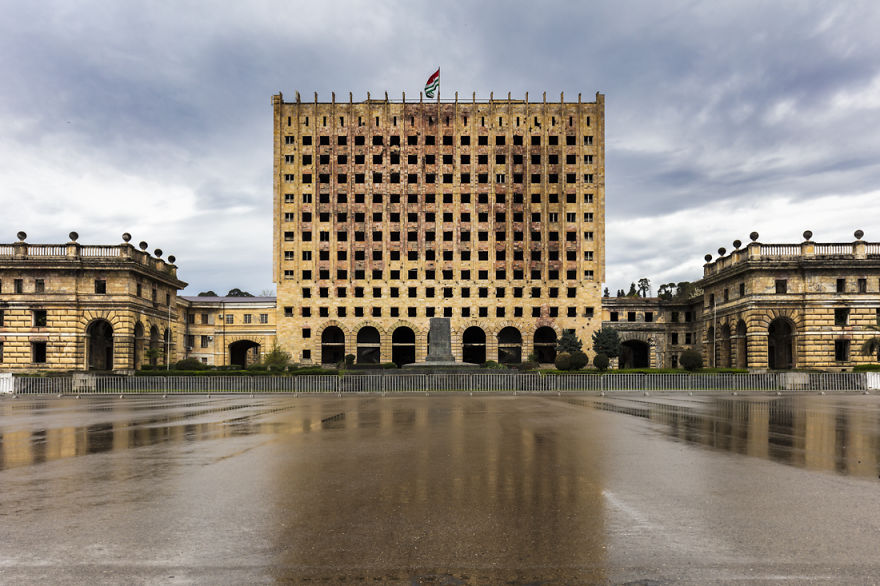 The abandoned former building of the government of the Autonomous Republic of Abkhazia, Georgia / James Kerwin / Bored Panda

Azerbaijan’s central government has publicly denounced an illegal presidential election held in the breakaway region of Georgia known as Abkhazia, held last Sunday and seen in Baku as an affront to Georgia’s sovereignty.

“The Azerbaijani Foreign Ministry reaffirms its support for Georgia’s sovereignty and territorial integrity and does not recognize the so-called "presidential elections" held on 25 August 2019 in the Abkhazia region of Georgia, as well as its results,” read a statement issued by the Azerbaijani foreign ministry on Monday.

“The Azerbaijani Foreign Ministry believes it is necessary to continue negotiations for peaceful settlement of Abkhazia issue in compliance with the norms and principles of international law.”

The election in Abkhazia, which has been under the de facto control of separatists for 25 years, was also rejected in Tbilisi, Georgia’s capital city, and by the country’s allies in Europe as well as the United States. Georgia’s President Salome Zurabishvili called the elections “a sham” in a Twitter post earlier this week, saying the vote was illegitimate.

Situated in the northwestern corner of Georgia, Abkhazia is, along with South Ossetia, one of two breakaway regions that have challenged Georgia’s statehood since the country regained its independence after the breakup of the Soviet Union in 1991. Separatist forces in Abkhazia fought a war of secession from 1992-1993, and in 1999, its self-styled rulers declared independence.

In 2008, war returned to Georgia after South Ossetian separatists began shelling Georgian villages. Georgia’s military response to restore control over South Ossetia was met with a military operation by Moscow. Separatist forces in Abkhazia opened a second front by attacking and pushing Georgian forces out of the Khodori Valley – the only part of Abkhazia that remained under Georgia’s control since the 1992-93 war. The clashes, which are regarded as the first European war of the 21st century, ended in a ceasefire agreement brokered by the European Union.

In addition to Russia, the two breakaway regions, which comprise 20 percent of Georgia’s landmass, are acknowledged as independent by the governments of Venezuela, Nicaragua, Nauru and Syria. All other countries consider the two regions legally part of Georgia.

The so-called presidential election in Abkhazia had nine candidates on the ballot, including the current leader of Abkhazia, Raul Khadzimba. The first day of voting resulted in no clear winner, pitting Khadzimba and the opposition candidate Alkhas Kvitsinia against one another in a run-off election that will be held on September 8. Both candidates are said to be firm supporters of Abkhazia’s independence from Georgia and prefer close ties with Russia.

Meanwhile, Azerbaijan also condemned illegal election in its Nagorno-Karabakh region, which is occupied by Armenia. On August 22, Armenian media reported that Yerevan will financially support the so-called election in the occupied region, also to be held on September 8.

Armenia and Azerbaijan fought an all-out war from 1991 until a ceasefire in 1994. As a result of the full-scale war, Armenia forcibly occupied 20 percent of Azerbaijan's internationally recognized territory, which includes the Nagorno-Karabakh region and seven adjacent districts. The war claimed the lives of over 30,000 Azerbaijanis and expelled one million more from their homeland. The bogus regime in the occupied region is not recognized by any country, including Armenia.

In 2015 and 2017, illegal elections were held in the occupied Nagorno-Karabakh region, which were unrecognized and condemned by Azerbaijan and the international community.