Eco-Friendly Transportation May Be The Next Big Thing In Kazakhstan 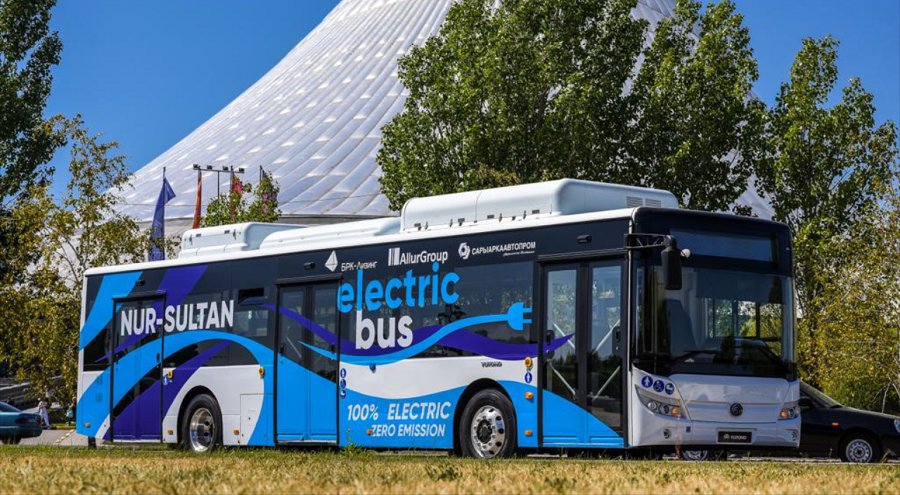 The 12-meter all-electric bus, jointly developed by Chinese Yutong and Kazakhstan-based vehicle manufacturer and distributor Saryarka AvtoProm, can seat 30 passengers and travel up to 350 kilometers (217 miles) before needing to recharge the battery. / TengriNews

Traditional diesel buses in Kazakhstan’s city streets could gradually become a thing of the past as officials in Nur-Sultan plan to launch fleets of electric buses to curb air pollution and carbon emissions.

Kazakhstan’s second-largest city of one million people may introduce its first fleet of 100 electric buses by the end of this year, according to Altai Kulginov, Nur-Sultan’s mayor.

“We are moving to a green economy, the number of people [residing] in the city is growing annually, and so is the number of cars,” Kulginov said earlier this year, according to a report by Khabar24. “It is necessary to reduce emissions into the environment. By the end of the year we will purchase 100 electric buses, and this is only the beginning.”

The 12-meter all-electric bus, jointly developed by Chinese Yutong and Kazakhstan-based vehicle manufacturer and distributor Saryarka AvtoProm, can seat 30 passengers and travel up to 350 kilometers (217 miles) before needing to recharge the battery.

“The [battery] design allows charging it only once a day, at night. Such an approach will significantly reduce investment in infrastructure,” said Roman Krivopalenko, an electric vehicle project coordinator at Saryarka AvtoProm, according to a report by Strategy 2050 published earlier this week.

Each electric bus costs $388,000. Batteries for each will need to be replaced every 10 years.

Meanwhile, electric bus trials in Kazakhstan began earlier this year at the lowest temperatures for the winter period, -38℃. Electricity consumption amounted to 0.91 kW per kilometer traveled. Saryarka AvtoProm also carried out tests in climatic conditions specific to Kazakhstan’s western region and tested batteries over long distances along the Nur-Sultan–Kostanay–Nur-Sultan route.

“Following the trials, the complete set of the electric bus was formed and all conditions for operation along the routes of the capital were taken into account,” Krivopalenko said.

The buses, which are jointly produced by Kazakhstan and China, are equipped with an electronic fare payment system, video surveillance, heating and insulation for batteries, an intelligent battery management system that can operate at low temperatures, amongst other features. Near each seat, there are USB ports so that passengers’ mobile devices can be charged.

Kazakhstan’s population is slightly more than 19 million – high for Central Asia, but globally low. Under the Kyoto Protocol, which went into effect in 2009, Kazakhstan vowed to reduce its carbon emissions by 15 percent by 2020 and up to 30 percent by 2050. The country committed to switching to a “green” economy, despite vast fossil fuel reserves, and is determined to generate three percent of its electricity from renewables by 2020; 10 percent by 2030; and at least half by mid-century.

Meanwhile, eco-friendly electric cars are gaining momentum in Kazakhstan, where roughly 700 of them are already on the road. In July, officials from what is Central Asia’s largest country announced the government’s intent to launch the mass-production of electric cars.

At the same time, Kazakhstan is working to deploy autonomous buses on public roads in different districts.

Earlier this year electric buses began operating on the roads of Aktau, a city along the east bank of the Caspian Sea. The Ankai passenger bus, which can seat 47 passengers, is equipped with an air conditioning system and is designed for transportation on suburban routes. The cabin has four video cameras, an electronic auto-informer, as well as luggage racks for hand luggage. USB charging ports are built into the backs of the seats, allowing charging mobile devices and other gadgets.