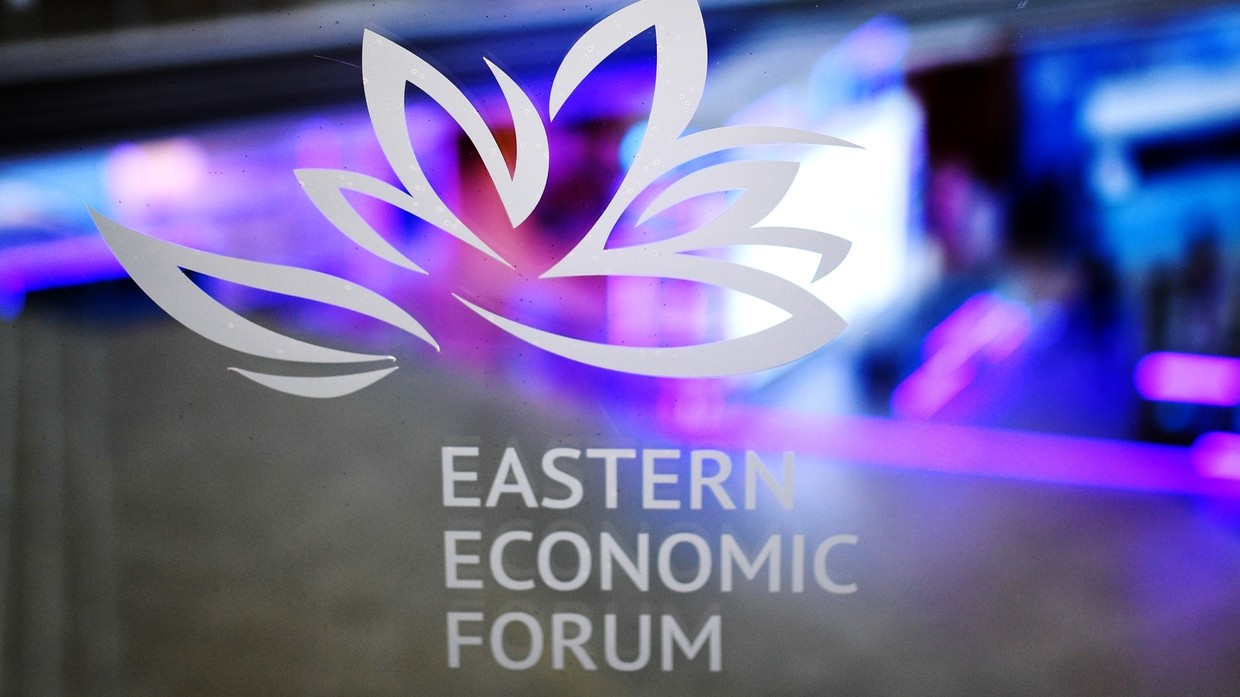 The logo of the Eastern Economic Forum in the main building of the Far Eastern Federal University, Vladivostok, Russia, September 1, 2021. / Alexander Kryazhev / Sputnik

Russia's economic links with its Asia-Pacific neighbors are expanding following the Eastern Economic Forum (EEF) last week, which reportedly resulted in more than $49.3 billion in deals.

Established in 2015, the forum aims to expand international cooperation in the Asia-Pacific region and attract national and international investors to Russia's Far East – an area that remains largely underdeveloped.

The sixth edition of the forum took place September 2-4 in Russia’s port city of Vladivostok, which lies roughly 100 kilometers (62 miles) from the border with North Korea and is located in Russia’s Far East. The three-day event brought together more than 8,500 participants from 66 countries around the globe.

"In terms of numbers, agreements were signed at the forum for a total of 3.6 trillion rubles," Deputy Prime Minister and Presidential Plenipotentiary Envoy to the Far Eastern Federal District Yury Trutnev said at the conference following the forum. "Now there is a lot of work to bring these 3.6 trillion (rubles) into the economy of the Far East."

Trutnev is convinced that work in the Far East will carry on, focusing on attracting investments, both Russian and foreign.

"We will continue to try to constantly create new development opportunities, thus securing for the Far East this status of a testing ground for management technologies associated with the development of the region," he said.

The forum, dubbed as a leading international discussion platform, has been held annually except last year when it was canceled due to coronavirus restrictions.

For the first time, the forum has been opened in a hybrid format where high-level guests had a chance to effectively participate both in the traditional face-to-face and online format. This year politicians, business executives and experts for regional development and cooperation were holding discussions under strict anti-Covid regulations.

This year’s forum, held under the theme "The Opportunities for the Far East in a World Under Transformation" attracted the participation of Chinese leader Xi Jinping and Indian Prime Minister Narendra Modi, Kazakhstan’s President Kassym-Jomart Tokayev and Mongolia’s President Ukhnaagiin Khurelsukh, who attended virtually.

For Russia, Far East is considered as a geopolitical gateway to Asia, and the region plays a key role in linking Russia and East Asia as it facilitates its economic cooperation with the rising Asian economies. Russia is poised to strengthen economic links with its Asia-Pacific neighbors in an effort to tie the country’s economy to the dynamic and growing economies of the Pacific region.

The development of Russia’s Far East region, which has been prioritized by President Putin, has seen a new impetus in economic and political contacts after Russia’s relations with the West deteriorated due to the Ukrainian crisis in 2014 and the allegations of Russian meddling in the 2016 US presidential election. The last seven years have included extensive efforts by Moscow to accelerate the development of the Far East and overcome challenges that have long prevented the capital from investing more time, attention and money in the region.