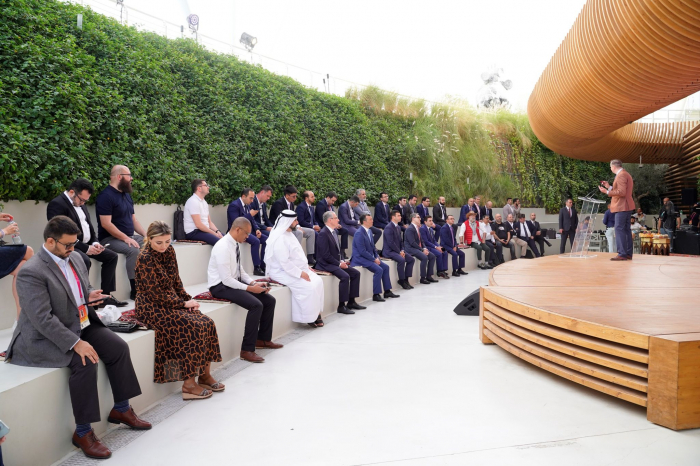 The introduction of the Digital Silk Way project to a global audience took place at the Azerbaijan Pavilion at the Dubai Expo, March 28, 2022 / Courtesy

The “Digital Silk Way” infrastructure project, a telecommunications corridor to connect Europe and Asia via Azerbaijan, has attracted an interest of global telecommunications giants at the “Dubai Expo” worldwide exhibition and “Capacity Middle East 2022” global event in Dubai.

The “Digital Silk Way” project launched by NEQSOL Holding and implemented by its subsidiary, AzerTelecom, also came into the international spotlight at the “Capacity Middle East 2022” telecommunications event in Dubai, where negotiations were held with Google, Cienna, Lumen, Neterra, China Telecom Global, China Mobile International, Vodafone Carrier Services, Turkcell Superonline, Vodafone Turkey, Batelco, STC, and other major international market players. Models of cooperation on the project have been agreed upon with various telecommunications operators and suppliers, and Memorandums of Understanding are expected to be signed.

The “Digital Silk Way” project is a cutting-edge digital infrastructure project that aims to build a modern transit fiber-optic infrastructure network connecting Europe to Central and South Asian markets. Once complete, it will provide the fastest, most advanced route for digital connectivity between two continents, making significant contribution to the development of digitalization and connectivity in the wider region, including Caucasus, Central and South Asia.

In 2020, the Global Strategic Infrastructure Leadership Forum held in the US selected the Digital Silk Way project as one of Asia’s top five infrastructure projects.

In the meantime, the “Digital Silk Way” project will expectedly come into the international spotlight as part of Capacity Media’s first-ever “Capacity Caucasus & Central Asia” event, to be held in Azerbaijan’s capital city, Baku.

The influential event will be held on the initiative and with the organizational support of NEQSOL Holding. Industry representatives from major global and regional telecommunications companies, as well as policymakers and representatives of governments, will come together in Baku for conversations that will shape the future of the telecoms industry – in the region and beyond.