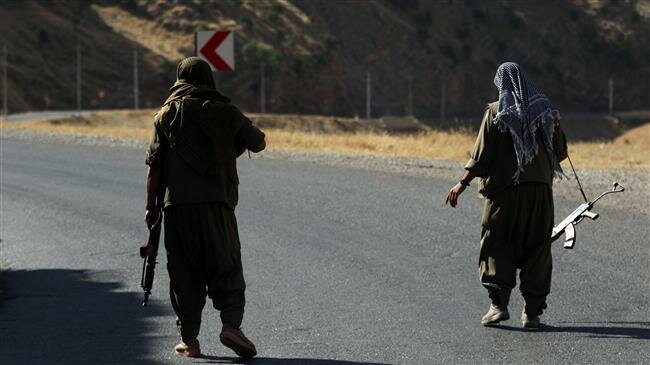 PKK militants are seen on a road in the Qandil Mountains, the PKK headquarters in northern Iraq, on June 22, 2018. / AFP

An unnamed official from the General Staff of the Iranian Armed Forces said that Iran has had no role in the Turkish military’s ongoing operation against the outlawed Kurdistan Workers’ Party (PKK) on Turkey’s eastern border.

“We will announce the outcome of the operation later,” Soylu said, according to Aksam.

In its more than 30-year history, the PKK has been responsible for the deaths of nearly 40,000 people in Turkey, which views the group’s activities as terrorism. Besides Turkey, the European Union and the United States have declared the PKK a terrorist organization.

Earlier, the Turkish Interior minister said that the operation would be part of Turkey's efforts to eradicate the group after successfully blocking most of its inroads at the border, and trapping the few hundred PKK militants left in the country.

Over the past few months, Turkish ground and air forces have been carrying out operations against PKK positions in the country as well as in northern Iraq and neighboring Syria. The PKK’s aim to create a Kurdish homeland poses a threat to not just Turkey but neighboring Iran, Syria and Iraq, which also have Kurdish populations.

Iran has had its own struggle with the PKK's Iranian offshoot, the Kurdistan Free Life Party (PJAK), which has waged several terrorist attacks in western Iran. In September 2018, Iran's Islamic Revolution Guards Corps reportedly fired up to seven missiles at a gathering of terrorist commanders in Iraq's semi-autonomous Kurdistan region.

Iran has in the past welcomed Turkey's announced plans to build a 144-kilometer (89.5-mile) stretch of wall along the border between the two neighbors. Ankara has described the wall as an effective barrier that could halt movement of PKK militants based in Iraq’s Qandil Mountains, which border Iran and Turkey.