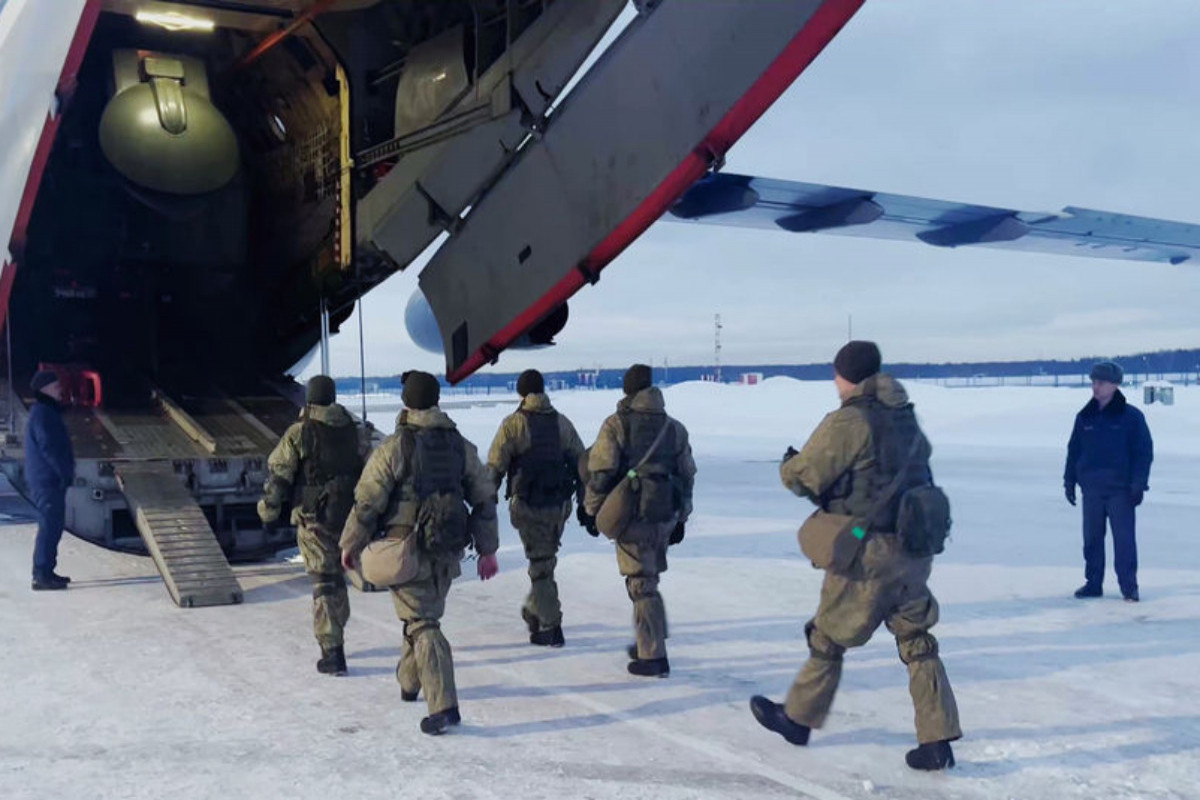 In a statement issued on Thursday, the CSTO said that the peacekeeping contingent had been sent to Kazakhstan “for a limited period of time to stabilize and normalize the situation in the country.” / Apa.az

Previously, Kazakhstan’s President Kassym-Jomart Tokayev appealed to the CSTO member states for assistance dealing with what he called a “terrorist threat.”

In a statement issued on Thursday, the CSTO said that the peacekeeping contingent, including the military units from Russia, Armenia, Belarus, Kyrgyzstan, and Tajikistan, had been sent to Kazakhstan “for a limited period of time to stabilize and normalize the situation in the country.”

“The main tasks of the CSTO Collective Peacekeeping Forces will be the protection of important state and military facilities, assistance to the law enforcement forces of the Republic of Kazakhstan in stabilizing the situation and returning it to the legal field,” reads the statement.

According to the statement, Russia’s peacekeeping contingent in Kazakhstan is represented by military units of the country’s Airborne Forces.

The Collective Security Treaty Organization (CSTO) is a military alliance between six former Soviet states, including Russia, Armenia, Belarus, Kazakhstan, Kyrgyzstan, and Tajikistan. The bloc dominated by Russia operates under a similar premise to that of NATO: an attack on one member state is considered an attack on all others, and each state is obliged to support other members.

Meanwhile, the bloc has sent its Collective Peacekeeping Forces on a mission for the first time in its almost 30-year history.

The protests in Kazakhstan, which started as demonstrations, initially erupted in Zhanaozen, in the country’s oil-rich western region of Mangystau and have quickly extended to other oil towns — Aktau, Aktobe, and Atyrau. Then the protests had reached Kazakhstan’s capital city of Nur-Sultan and Almaty, the largest city, turning into the most geographically widespread protest in the country’s history.

Demonstrators demanded the price of liquefied petroleum gas — a low-carbon fuel that many Kazakhs use to power their cars — to be halved from 120 tenge ($0.27) per liter to the level at which the fuel was sold last year.

However, the protests have intensified into widespread discontent with the government, even though officials in Nur-Sultan had taken a decision to lower LPG prices.

As the protests spread across the country, President Tokayev declared a state of emergency in Almaty and the Mangystau region and then in the whole country. He also imposed a curfew in Almaty, where thousands of people had taken to the streets, and promised a harsh crackdown as mass unrest plunged the country into chaos.

On January 5, after some protesters seized large infrastructure facilities in Almaty, including an airport, President Tokayev turned to the CSTO for assistance. While addressing a meeting of the Security Council on Thursday, Tokayev said that Kazakhstan was facing armed aggression from “terrorist gangs trained outside the country.”

“Almaty was attacked, destroyed, vandalized. Residents of Almaty became victims of attacks by terrorists and bandits. Therefore, it is our duty [...] to take all possible actions to protect our state from an external threat,” the president said.

On Friday, the government announced that it regained control over all strategic infrastructure facilities. At the same time, Kazakhstan’s interior affairs ministry said 4,000 people had been detained, 26 civilians killed, and as many injured. Some 18 members of security forces have been killed and more than 800 wounded during unrest in several regions of Kazakhstan.