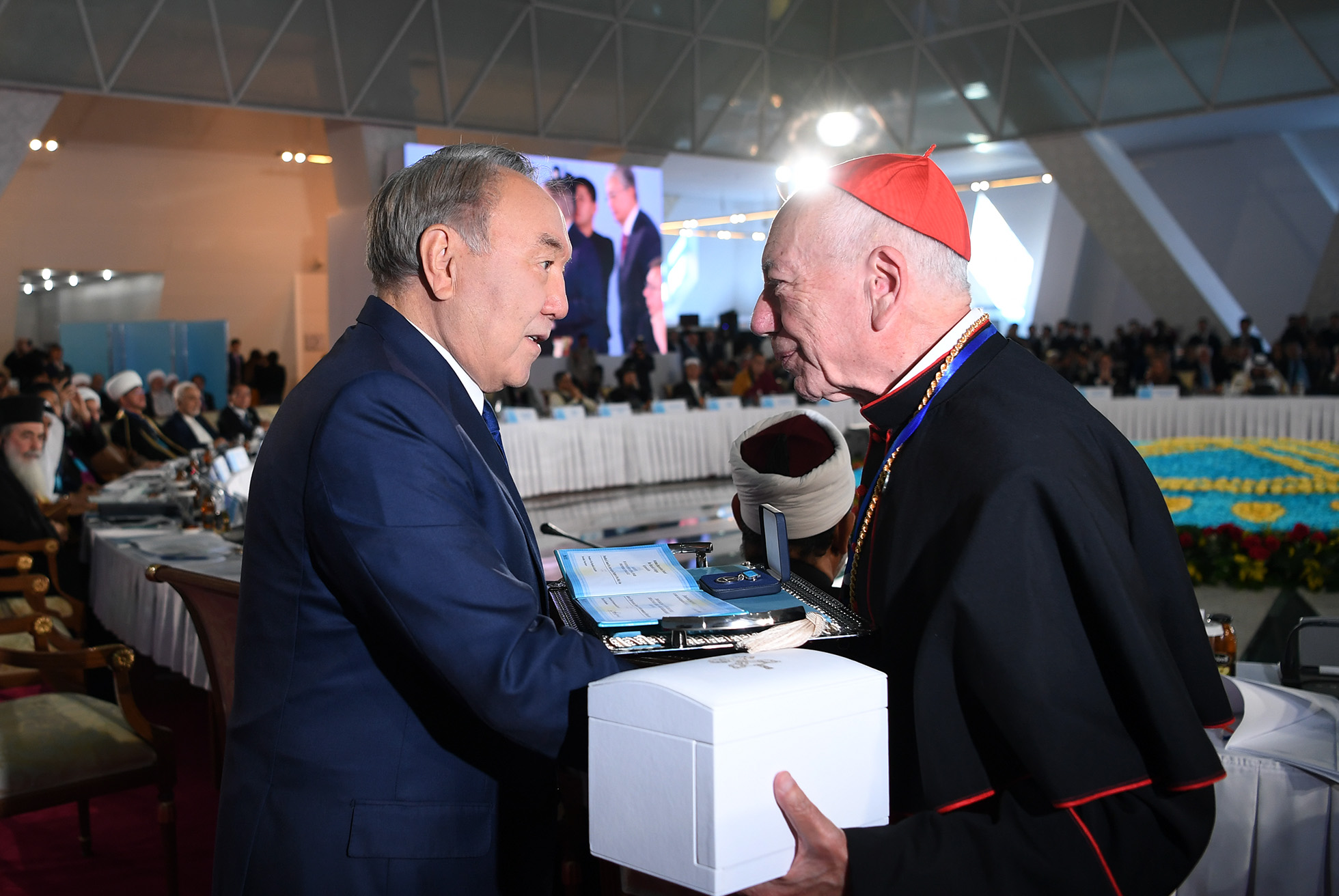 The Vatican was represented by Cardinal Francesco Coccopalmerio, who says that Kazakhstan is a secular state where religion, culture and history coexist harmoniously. / Ak Orda

Kazakhstan’s President Nursultan Nazarbayev announced on Wednesday that the country is ready to launch a worldwide platform for the development of interconfessional and inter-civilization dialogue.

“Kazakhstan will continue to make maximum efforts to address issues related to regional and global security, and for the joint implementation of the initiatives I have announced, I am ready to establish a Center for the Development of Interconfessional and Inter-Civilizational Dialogue,” the official website of the Kazakhstani president cited Nazarbayev as saying.

“We have been living in the third millennium for 18 years already, but peace, prosperity, wealth have not become the main trend of human development. The world community couldn’t get out of the ominous circle of mutual mistrust, hostility, and conflict,” he said.

Regional and global security issues came into the spotlight this week as government officials and spiritual leaders from around the globe gathered for the sixth Congress of World and Traditional Religions, held in Astana, the capital of Kazakhstan. Attendees included Serbia’s President Aleksandar Vučić, OSCE Secretary General Thomas Greminger, and Nassir Abdulaziz Al-Nasser, High Representative for the Alliance of Civilizations of the United Nations.

For the first time ever delegations from Vietnam, Singapore and Uzbekistan took part in the event, as well as representatives from Egypt, which is home to Coptic Christianity, one of the oldest branches of the faith.

The head of the Roman Catholic Church, Pope Francis, had been invited by President Nazarbayev to attend the Congress, but Francis was unable to due to scheduling conflicts. The Vatican was represented by Cardinal Francesco Coccopalmerio, who says that Kazakhstan is a secular state where religion, culture and history coexist harmoniously.

“I would like to thank Nursultan Nazarbayev for striving to build a dialogue with all interested parties, and accordingly creates an important platform for maintaining this dialogue even despite some critical moments,” Coccopalmerio said on Wednesday, according to reports by BNews.

The brainchild of Nazarbayev, the Congress was first held in 2003 and takes place in Kazakhstan’s capital city once every three years. This year the congress met under the motto “Religious Leaders for a Safe World” and brought together more than 80 delegations representing global religions.

Kazakhstan, a Muslim-majority country, abides by its principles of religious tolerance. The Kazakhstani constitution defines the country as a secular state and provides for freedom of religion and belief, as well as for the freedom to decline religious affiliation altogether.

Today, the former Soviet republic is nearing 19 million people and unites more than 100 ethnicities, including ethnic Kazakhs, which make up 66 percent of the population. Russians, Uzbeks, Ukrainians, Tatars, Germans, Koreans and Azerbaijanis are all present in the country, along with other minorities. Nearly 70 percent of the population is Muslim according to U.S. government data, but more than a quarter of Kazakhstanis are Christian, predominantly Russian Orthodox.

As of today, there are more than 3,000 mosques, churches, chapels and synagogues in Kazakhstan, while nearly 500 foreigners are engaged in missionary activities.

“With this diversity, we were able to find a balance between ensuring national security and protecting religious freedoms. In our country, admittedly, it was possible to form a special, Kazakhstani model of interfaith peace and harmony. I am sure that the experience and practice of Kazakhstan are fully applicable on a global scale,” Nazarbayev said at a press conference on Wednesday.