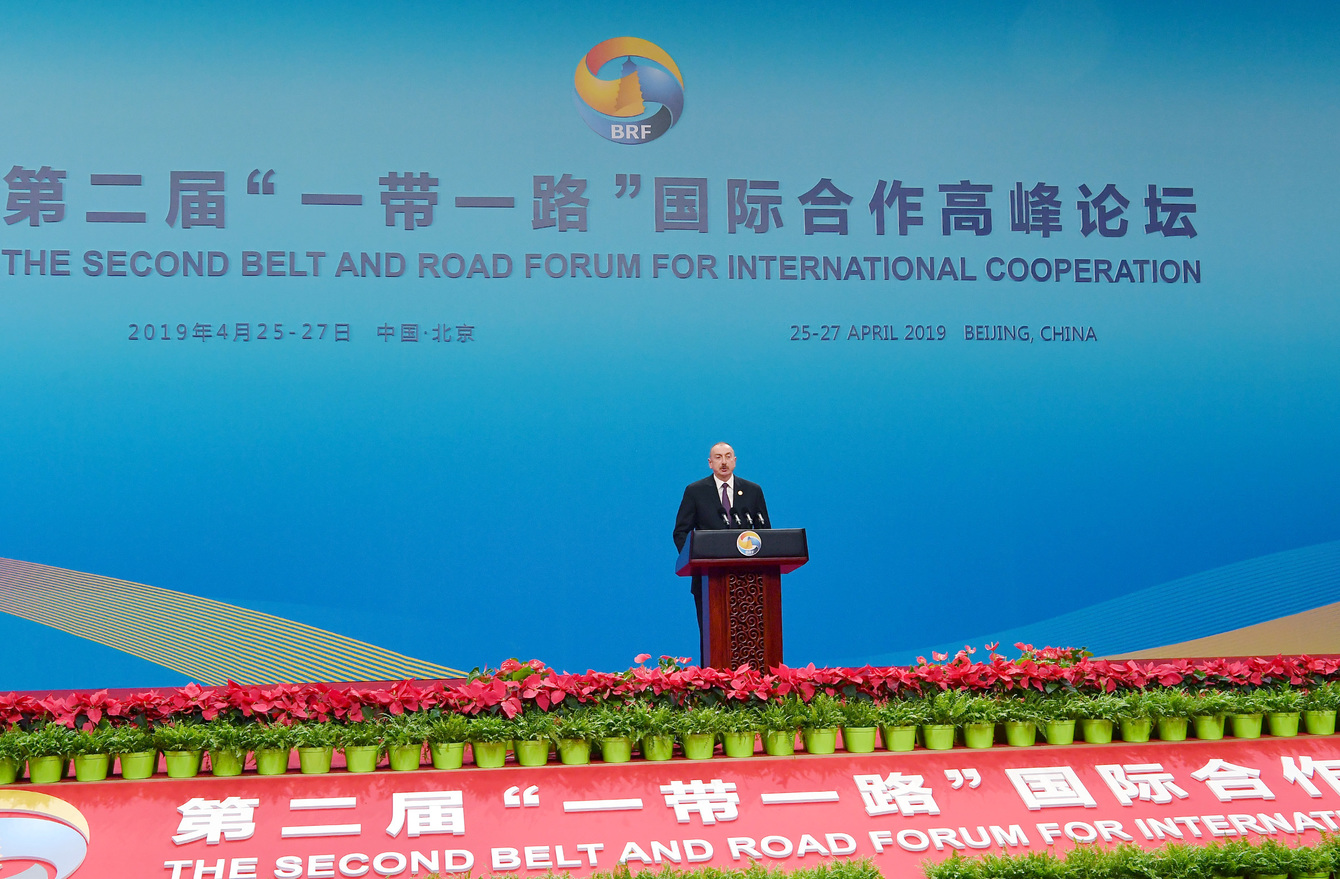 President of the Republic of Azerbaijan gives a speech at the 2nd Belt and Road International Cooperation Forum, Beijing, China, April 26, 2019 / President.Az

The second Belt and Road Forum, held in Beijing last week, brought together 40 heads of state and government – including Ilham Aliyev of Azerbaijan, Vladimir Putin of Russia, and former Kazakhstani President Nursultan Nazarbayev – and reportedly resulted in more than $64 billion in deals.

“Azerbaijan has supported the ‘One Belt, One Road’ initiative proposed by President Xi Jinping since the beginning,” President Aliyev said during the speech he gave on Friday, according to his official website. “This project does not only provide transport connections. It also strengthens ties between different countries, promotes dialogue and co-operation, and creates new opportunities for international trade.”

Through what has since been renamed the ‘Belt and Road Initiative’, Chinese officials are said to be reinventing the ancient Silk Road that once connected eastern and western markets. By establishing a stronger, faster supply chain through a series of roads, railways and shipping routes, the Asian giant is leveraging the transit potential of 65 countries that together account for 30 percent of the world’s gross domestic product.

“Three years ago, Azerbaijan and China signed a Memorandum of Understanding on joint promotion of the Silk Road Economic Belt,” Aliyev said in his speech. “Creation of modern transport infrastructure is one of the priorities of Azerbaijan. Taking advantage of our geographical position, we invested in creating bridges between Asia and Europe.”

According to Chinese state media, Beijing has already signed over 170 deals with 125 countries that in some way involve the Belt and Road Initiative. Azerbaijani and Chinese companies are reported to have inked 10 agreements last week covering multiple fields such as infrastructure, logistics, energy, tourism, agriculture, investment, information and communication technologies. The amount of the contracts totaled $821 million.

A Strategic Partnership Agreement was one such deal signed in Beijing last week, between ADY Container, a subsidiary of Azerbaijan Railways Company, and Xi'an Continental Bridge International Logistics Co., Ltd.

The next big deal came up as AzerTelecom, the backbone Internet provider connecting Azerbaijan to the global network, signed a Strategic Memorandum of Cooperation with China Telecom, a leading company in the field of information and communication technologies, within the Azerbaijan Digital Hub program, which aims to transform the South Caucasus's largest country into the regional digital center. The memorandum addresses cooperation between these two companies on the creation of the Asia-Europe telecommunications corridor, dubbed Digital Silk Road, and transmission of China's internet traffic through Azerbaijan.

Azerbaijan, bordering the Caspian Sea, had hopped on board with the Belt and Road Initiative in 2015. That year President Aliyev signed a memorandum of understanding with China, hoping to position what is becoming an influential economy for European energy security into the broader geopolitical picture.

The Trans-Caspian International Transport Route (TITR), the North-South and East-West routes, and the Baku-Tbilisi-Kars (BTK) railway – all involving Azerbaijan – help to put what is the South Caucuses largest economy on Beijing’s radar for developing Belt and Road. The 826-kilometer (513-mile) BTK railway, which went into operation in 2017, reduces cargo shipping between Asia and Europe to two weeks from what otherwise would take a month by rail and 40-45 days by sea. The three logistical routes mean the country has high potential to be incorporated into the road, rail and shipping routes that form what Chinese President Xi Jinping has called the “project of the century.”

At last week’s forum, President Aliyev emphasized the significance of the BTK, saying that the railway “links the continents and is an important link between Asia and Europe. This railroad is an important part of the East-West transport corridor [and] plays a very important role in transport in Eurasia.”

Azerbaijan’s potential does not stop with railways, however. Last year a new Caspian seaport was launched, considered the most advanced on the five-nation body of water that is often described as the world’s biggest lake. The port has a capacity of up to 15 million tons of cargo and 100,000 containers annually, with the possibility of expanding that to 25 million tons of freight and up to one million containers per year.

Beijing has already struck a deal with Baku to have the new Baku International Sea Trade Port incorporated into the Belt and Road Initiative and become a regional distribution center within the Silk Road Economic Belt project – a modern logistics network for transporting cargo from China through the Caspian Sea to Iran, Turkey and westward to Europe and backward.

While Belt and Road has garnered a lot of news coverage since Xi Jinping announced the idea in 2013, many countries – those in Central Asia especially – are hopeful that their economies will be better linked to global networks of commerce and trade.