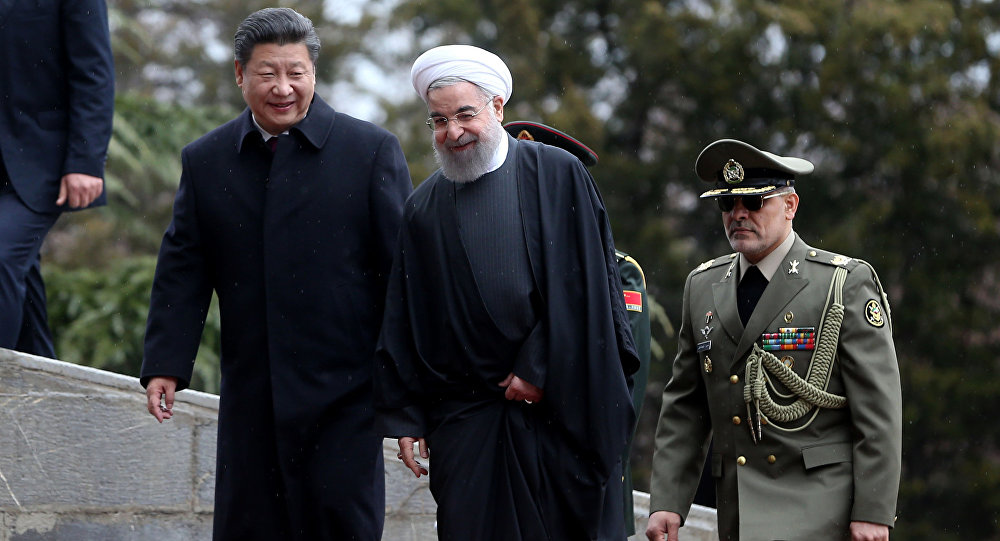 Iran's President Hassan Rouhani met his Chinese counterpart Xi Jinping on the sidelines of a summit of the Shanghai Cooperation Organization in the Chinese port city of Qingdao on June 10, 2018. / Ebrahim Noroozi / AP Photo

Chinese President Xi Jinping expressed readiness to strengthen cooperation with Iran within the framework of multilateral mechanisms, during a meeting with his Iranian counterpart at the recent Shanghai Cooperation Organization summit (SCO) held in China.

“China and Iran should take the deepening of political relations as the overall guidance to constantly increase strategic mutual trust, enhance exchanges at all levels, and continue understanding and supporting each other on issues of major concern involving respective core interests,” Jinping said on June 10, according to the Chinese Ministry of Foreign Affairs.

The Chinese president urged both sides to team up to construct the Belt and Road Initiative, China’s global trade development project that is meant to unite land shipping routes and seaports, with the expectation that shipping across Eurasia will be significantly reduced and speed up global commerce.

The two-day summit of the Shanghai Cooperation Organisation, a regional security bloc led by China and Russia, kicked off on June 9 in the coastal Chinese city of Qingdao. The organization was formed in 2001, and often referred to as the ‘alliance of Asia’ due to its growing importance and centrality in the Asian continent.

Iran is currently an observer member of the SCO, having applied for full membership in 2008. The organization rejected Tehran’s application on the grounds that countries under United Nations sanctions could not be admitted. The removal of nuclear-related sanctions in 2016, however, opened the possibility of Iran joining.

The summit comes after U.S. President Donald Trump in early May announced his decision to withdraw from the Joint Comprehensive Plan of Action (JCPOA), also known as the Iran nuclear deal.

In his meeting with Xi, Iran’s President Hassan Rouhani was reported to have stated that in past years China has been Iran’s first trade partner.

Chinese businesses are expected to step up activities in Iran to compensate for U.S. moves and sanctions, and the possible withdrawal of European countries who fear punitive American measures.

Chinese business in Iran has doubled over the past decade, largely because of oil, as China is Iran’s largest foreign export market and the biggest exporter to Iran, according to The Washington Times. In the first quarter of 2018, China's imports of Iranian crude rose 17.3 percent year-on-year to 658,000 barrels per day (bpd), making Iran its sixth largest supplier.

The U.S. Treasury Department has warned international buyers of Iranian oil, however, to wind down contracts before Washington re-imposes sanctions on the oil, energy, shipping and insurance sectors in November.

French energy company Total announced in May that it might quit a $4.8 billion contract to develop a portion of the South Pars natural gas field if it could not secure a waiver from U.S. sanctions. In a response to Total’s public announcement, Iranian Oil Minister Bijan Namdar Zanganeh said that if the U.S. government does not agree with Total remaining in the deal, Iran would replace the company with China National Petroleum Company (CNPC) – the state-owned China National Petroleum Corp. – which already owns 30 percent of the South Pars project and could take over Total’s 50.1 percent stake.