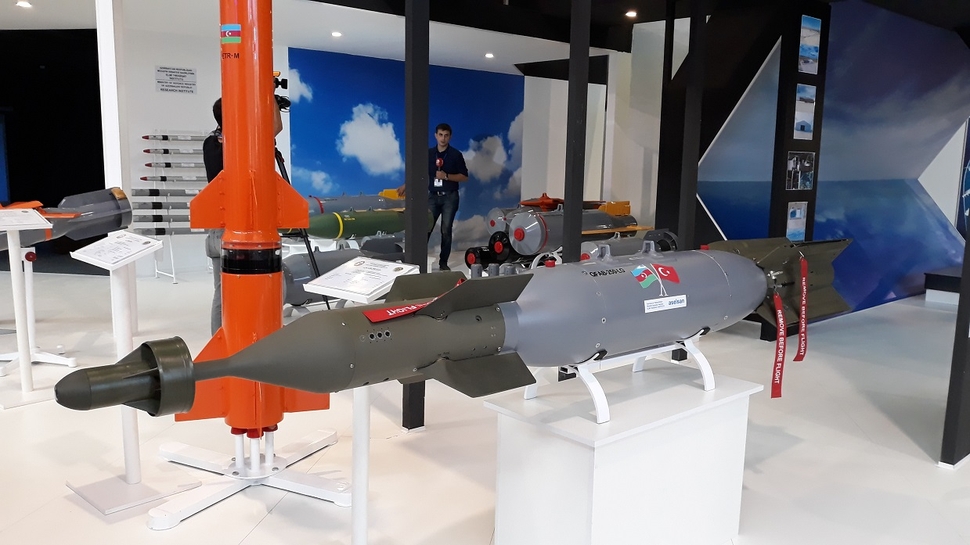 Weapons development and production by companies in the Caspian region were recently showcased, when new hardware produced by Azerbaijan and Russia went on display in Istanbul at the IDEF-2019 international defense exhibition.

The Defense Industry Ministry of Azerbaijan showcased on Wednesday the all-new, domestically made high-explosive air bomb QFAB-250 LG for the first time in a foreign country after its first public demonstration in Baku in September.

“The high-explosive fragmentation bomb of 250 kg caliber with a laser sight was created on the basis of a project that was jointly developed by the Research Institute of the Ministry of Defense Industry and the Turkish company ASELSAN,” read a statement published on the ministry’s website Wednesday.

Three inert samples, which get filled with wet sand or cement instead of explosives, of the QFAB-250 LG aerial bomb – are ready and will be tested before proceeding with mass production for combat. Inert bombs, known also as “dumb bombs,” are designed for training and do not lead to fatal consequences.

The QFAB-250 LG was produced following NATO standards for the development of defense products, making it useable domestically as well as ready for export to foreign buyers. It measures 3,300 millimeters in length, while its diameter is 240 millimeters, and weighs 270 kilograms. The new generation aerial bomb allows hitting a target at a distance of up to 12,000 meters (39,370 feet) with a maximum trajectory deviation of 10 meters (33 feet).

The four-day IDEF-2019 arms fair in Turkey was hosted by the country’s defense ministry under the management and responsibility of the Turkish Armed Forces Foundation and organized by TUYAP Fairs and Exhibitions Organizations Inc. The international exhibition, which ran from April 30 – May 3, featured thousands of weapons and equipment such as armored personnel carriers, unmanned ground vehicles, guided missiles, military simulators and other latest developments demonstrated by 1,061 defense companies represented by 68 countries. Foreign companies amounted to 576 while 485 were from Turkey.

A new feature in the expo, now in its 14th year, was the Russian frigate Admiral Essen, belonging to Russia’s Black Sea flotilla. The new warship is one of six vessels that are being built for the Russian Navy which are designed to fulfill operations in “far sea zones,” according RIA Novosti.

The most advanced frigate of its kind, Admiral Essen has the largest helipad among all Russian warships. It also consists of modern, multi-caliber, anti-aircraft missile systems called “Shtil” and "Caliber" installed on its deck.

According to new, annual data released this month by the Stockholm International Peace Research Institute (SIPRI), Russia ranked behind Saudi Arabia ($67.6 billion), India ($66.5 billion), France ($64 billion) in terms of its defense budget, although it is considered to have one of the most powerful militaries in the world. By comparison, United States’ defense budget for 2018 was just under $649 billion and China’s just under $250 billion.