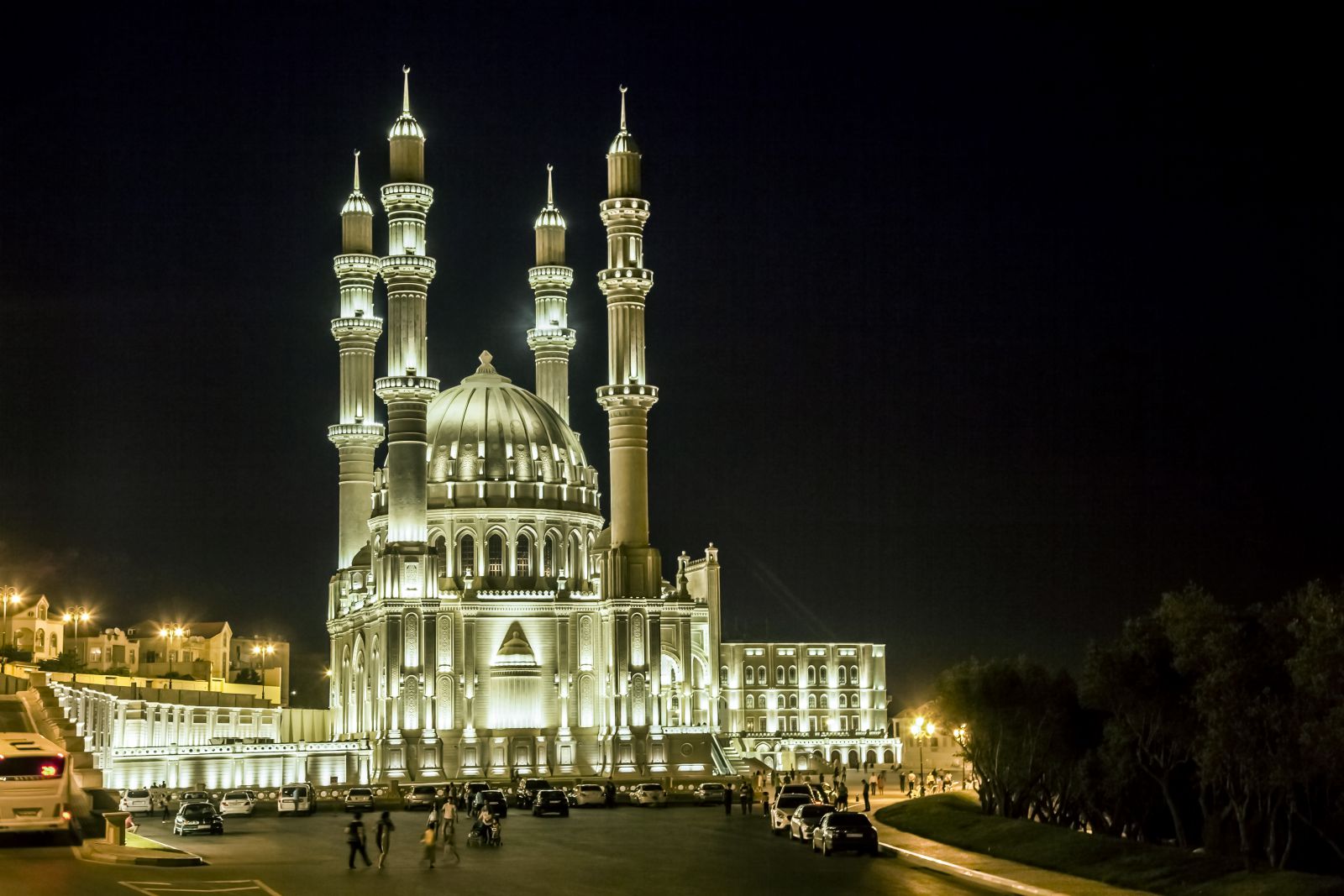 Millions of Muslims across Azerbaijan, Kazakhstan, Iran, Turkmenistan and Russia are fasting from sunrise until sunset during the holy month of Ramadan.

The word Ramadan is derived from the Arabic term ramida or ar-ramad, which means scorching heat or dryness. Muslims who observe the holy month abstain from eating, drinking or smoking from sunrise until sunset. Ramadan lasts for 30 or 31 days based on the lunar Islamic calendar and sighting of the moon.

During Ramadan, Muslims are expected to show more empathy and compassion towards the needs, sufferings, and misfortunes of others, while giving to charity is highly encouraged. The month is also considered to be the best time of the year for Muslims to seek mercy from Allah, and engage in spiritual reflection.

The beginning of Ramadan falls on a different date every year, and some countries announce the start on different days, depending upon the sighting of the moon. Some countries determine the first day of Ramadan through astronomical calculations, while for others it starts when a new moon is fully and clearly seen. In some countries, Ramadan traditionally commences only with the testimonies of authoritative Muslim theologians.

For Muslims in Azerbaijan, which account for 97 percent of the constitutionally secular country’s population of 10 million, Ramadan begins on Saturday, April 25, based on calculations of the Shamakhi astrophysical observatory. Shahin Hasanli, one of the renowned theologians in Azerbaijan, says the Ramadan moon sighting in Azerbaijan is expected to take place on April 24, which means the first day of the holy month is the next day.

“Ramadan is when prayers are accepted [by Allah], when the holy book of Quran was sent down [to Muslims],” Hasanli told local media. “So, we should pray, pray for our nation and entire humanity to get rid of this evil,” he added referring to the Covid-19 pandemic.

This year’s Ramadan rituals and practices, such as iftar - when Muslims break their fast after sunset and gather with friends, relatives, families together, will not be arranged in mass gatherings due to the coronavirus-related special quarantine regime applied in Azerbaijan until May 4. Muslims in the country have been instructed to hold iftars at home and abstain from parties during the lockdown.

“People should adhere to self-isolation rules, keep a social distance. Pursuant to the guidelines set by the Operative Headquarters, the mass gatherings will not be held in masjids this year,” Hasanli said.

The Operative Headquarters is a special government structure that deals with coronavirus cases in Azerbaijan. COVID-19 has infected 1,592 and claimed 21 lives in Azerbaijan. The special quarantine regime, implemented as part of a nationwide effort to contain the spread of the virus, is expected to wrap up on May 4.

Muslims in Kazakhstan, who make up more than 70 percent of the population of over 18 million, are also under lockdown.

The Nur-Astana Mosque in the Kazakhstani capital of Nur-Sultan; Central Mosque in Almaty; and Manjali Mosque in Atyrau are just three of the main locations where Muslims usually gather for iftar during Ramadan. Before the maghrib, or the sunset prayer, those fasting in Kazakhstan head to Ramadan street banquets, also known as “mercy restaurants” among locals, where food is served to all, but mainly to needy and poor people free of charge.

But because of the lockdown guidelines, that will not be possible.

Dauren Abayev, the Minister of Information and Social Development, urged Kazakhstanis to fast and pray at home and share Ramadan digitally.

‘‘We deeply respect the spiritual and religious feelings of believers, but a pandemic of a dangerous viral disease poses a threat to the health of all, without exception,’’ Kazakhstan-based Sputnik quoted Abayev as saying.

At the same time, the country’s Chief Sanitary Officer Ayzhan Yesmagambetova says in protein, vitamins and fats deficiency, functions of immune system decrease, and as a result people become more susceptible to infections.

“For those who decided to fast, it is recommended to keep a complete diet with enough protein, fats, carbohydrates, vitamins, and consume plenty of water, fruits and vegetables,’’ Yesmagambetova said on Wednesday.

While predominantly Christian, Russia also sees celebrations of Ramadan, as the Muslim population living there accounts for between 10 and 15 percent of the country's overall population. Every year, the Muslim-majority autonomous republics within the Russian Federation such as Ingushetia, Chechnya, Dagestan, Kabardino-Balkaria, Karachay-Cherkessia, Tatarstan, and Bashkortostan celebrate the holy month.

Fasting in Russia this year runs from April 24 to May 23 pursuant to the testimony of Muslim theologians from the Spiritual Administration of Muslims of Russia, a Moscow-based centralized religious organization.

"We must accept Ramadan as a test sent to us by Allah," the head of the Russian Muftis Council, Mufti Sheikh Ravil Gaynutdin addressed worshipers on Wednesday. "We lived and sometimes forgot about who gave us health, life, well-being, work. Today, there is an opportunity to fall into a muse, to look past and look into the future."

Traditionally, Muslims in Russia celebrate Ramadan by visiting one or several of the more than 8,000 mosques in the country, including the Moscow Cathedral Mosque – the largest and the most impressive mosque – or others such as the Old Mosque, the Memorial Mosque, the Yardyam Mosque and Inam Mosque. However, the holiday will be a bit different this year as mosques in most Russian regions have either closed or limited access for worshipers due to the coronavirus pandemic.

"We consulted with Muslim scholars from different countries — Saudi Arabia, Turkey, Egypt, Syria, and Central Asia — and therefore recommended that our co-religionists abstain from collective events during the month of fasting," TASS quoted Chairman of the Spiritual Assembly of Russian Muslims (DSMR) mufti Albir Krganov as saying on Wednesday. "First of all, this applies to mass night prayers of taraweeh."

During Ramadan, two main meals are served to begin and end the daytime fast. Suhoor, or sahur, a pre-dawn meal, and iftar, which is served and eaten after sunset, are usually enjoyed in group gatherings among family and friends. But, Krganov called on Muslims to refrain from such wide events and to hold them only in a narrow family circle.

At a time when people are self-quarantining at home to avoid spreading the coronavirus, Gaynutdin called on Muslims to focus on individual prayer habits and turn isolation into inner peace.

Iran is considered one of the countries hardest hit by the coronavirus, with over 5,500 COVID-19-related deaths recorded to date.

In response to the coronavirus the government has canceled public events and Friday prayers and closed schools, universities, shopping centers, bazaars, and holy shrines, while festivals and celebrations have also been halted. However, in recent weeks, the government has re-opened some “essential” businesses amidst struggles the country’s economy has been facing due to the virus outbreak and US sanctions.

But mosques, shrines and holy sites across the country remain closed due to risks of spreading the virus among crowds. Earlier this month, Iran’s President Hassan Rouhani announced that some sites may open on May 4.

At the same time, Iran's Supreme Leader, Ayatollah Ali Khamenei, who has final say on all state matters, said mass gatherings may be barred throughout Ramadan over the virus outbreak. He also appealed to Iranians in a televised speech and urged them to pray at home during the holy month.

‘‘In the absence of public gatherings during Ramadan, such as prayers, speeches ... which we are deprived of this year, we should not neglect worship, invocation and humility in our loneliness,’’ France24 international news channel quoted Khamenei as saying.

‘‘We need to create humility and supplication in our families and in our rooms,’’ he added.