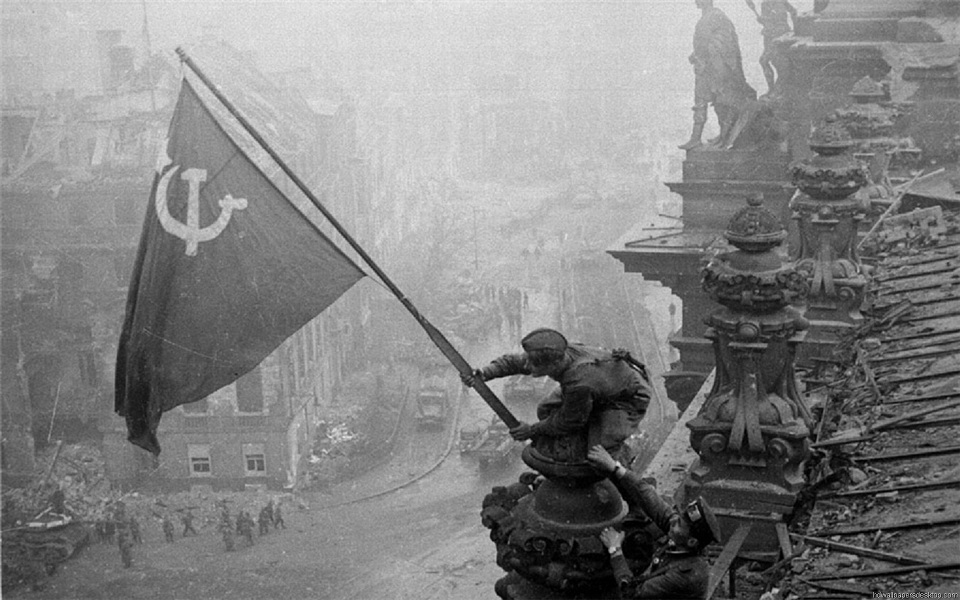 Soviet soldiers raising the flag of the Soviet Union atop the Reichstag building in Berlin, May 2, 1945

Post-Soviet countries, including the Caspian littoral states of Russia, Azerbaijan and Kazakhstan are today celebrating 72 years of victory over fascism by remember May 9, 1945, as the date when Nazi Germany surrendered to the Soviet Army and brought an end to what was known as the Great Patriotic War.

May 9 is remembered as “Victory Day” in the 15 republics that formerly comprised the Soviet Union, as it marks the signing of the German Instrument of Surrender, which took place one day before, on May 8, 1945. (The Soviet government had announced victory early on May 9, after Germany’s fascist regime signed the document in Berlin.)

Denis Denisov, Director of the Institute of Peace Initiatives and Conflict Studies in Moscow, says the victory over Nazi Germany was a common triumph for all people within the former USSR.

“A well-known fact is that the modern sovereign states, which had been part of the Soviet Union, contributed hugely to the victory over Fascist forces. All nations fought for the same country, the Soviet Union. This is a common great victory,” Denisov told Caspian News.

The Great Patriotic War began on June 22, 1941 when Adolf Hitler’s Nazi forces’ made a sudden attack on the USSR, historically termed a biltzkrieg, or “lightning war.” Having failed to occupy Stalingrad (modern-day Volgograd) and Moscow in 1942, Hitler ultimately failed in his quest to take over Russia and subjugate the world’s largest country. Casualties were not small, however, as the war claimed the lives of 26.6 million within the Soviet Union, accounting for more than half of all casualties in World War II.

“That victory over fascist Germany had changed all aspects of life in the Soviet Union,” Denisov said.

To commemorate May 9, the Russian Federation – the successor state to the USSR – still hosts a military parade in Moscow’s Red Square each year. This year’s parade in Moscow involves 10,000 Russian soldiers and dozens of aircraft and helicopters. Each year tens of thousands of spectators attend the parade – an event so complex that three different airports in the Moscow area close their airspace to accommodate the festivities.

“Victory Day is the day of honor for the Soviet nation. We did not just stop fascism, we really saved the world! On May 9 every year I can’t stop my tears from falling when I see our war veterans. There are so few of them these days, and every year they are less and less,” Melnikov told Caspian News.

The importance of May 9 is not missed on residents of Azerbaijan, a former Soviet republic and Caspian region country that dispatched more than 600,000 of its nationals to the battlefields to fight under the Red Army of the Soviet Union. During the war, Azerbaijan’s rich oil reserves supplied over 80 percent of the gasoline required to power military equipment.

“We deserve to celebrate this day as a victory day. Azerbaijan has made an immense contribution both materially and morally to ousting Nazi forces from the motherland,” Tamraz Islamov, a 29 year-old resident of Baku, told Caspian News. “Fascism was focused on occupation policy; it was not a progressive ideology.”

Kazakhstan, another Caspian state, mobilized over 1.2 million people and lost more than 400,000 of its comrades during the war.

“As the citizen of Kazakhstan, but not a participant in that war, I feel the significance of the event and simultaneously admire the people of that time. Unconditionally, May 9 is a great day in the history of many nations,” said Jamilya Inkabekova, a resident of Karaganda city in Kazakhstan, told Caspian News.

Kazakhstan was one of the strongest back fronts in the Soviet Union during the years of war. Karaganda miners produced 35 million tons of coal, increased the region’s oil production by 39 percent from the starts to the end of the war.

Georgia, a country in the South Caucasus and along the Black Sea lost nearly eight percent of its population to the war, as an estimated 400,000 Georgians lost their lives fighting Nazi Germany. Another 350,000 were veterans of the war.

“This was a battle against evil, in which Georgians made a great contribution,” said Ana Gogoladze, a 24-year old resident of Georgia’s capital Tbilisi. “In this war, for a small country, like Georgia, the loss was disproportionately large. We lost over 400, 000 soldiers, while such a large country as USA, lost the almost the same number of people,” Gogoladze said in an interview with Caspian News.