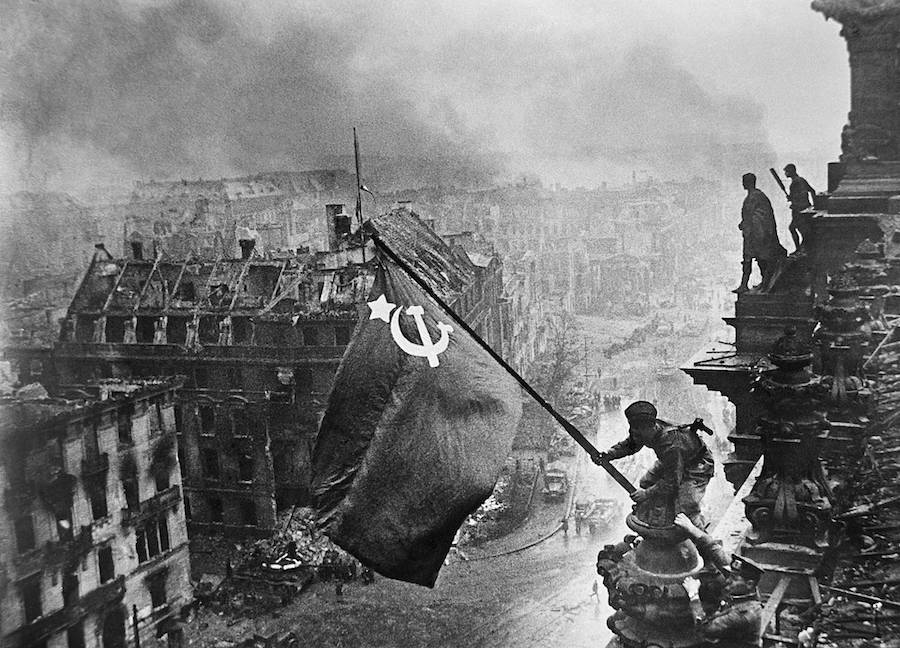 The Soviet Banner of Victory raised by the Red Army soldiers on the Reichstag building in Berlin on May 1, 1945. / Yevgeny Khhaldei / TASS

Falling on May 9, Victory Day is a holiday commemorating the surrender of Nazi Germany in 1945. The occasion, marking the end of the Second World War, is observed by people in different parts of the world, including various former Soviet Union republics that witnessed some of the worst horrors of the war.

The German invasion of the Soviet Union, which started on June 22, 1941, took the country’s leadership and nearly 200 million inhabitants completely by surprise. A biltzkrieg, or “lightning war” against the USSR violated the Molotov-Ribbentrop treaty signed between Germany and the Soviet Union in 1939, which had ensured that neither country attacked the other.

Some 75 million people died in World War II, of whom nearly 27 million people were from the USSR. The Soviet Union spent over $192 billion on the war effort. Caspian News outlines some of the most significant contributions of the post-Soviet nations that make up the region.

Manpower, along with the oil, defense, chemical, agricultural, and mining industries of Azerbaijan played an unmatched role in the Soviet Union’s victory over Nazi Germany during the Great Patriotic War. Around 700,000 soldiers were sent to frontline units, and about half of them died in service. Several frontline divisions of the Soviet army each consisted of Azerbaijani soldiers, including the 416th division, which reached Berlin from its home in the Caucasus.

The Azerbaijani chemist Yusif Mammadaliev organized the production of 38 types of fuel, eight types of diesel, and various compounds of gasoline for nine types of aircraft, and the famous Molotov cocktail. Baku is reported to have produced 10,000 Molotov cocktails per day. Mammadaliyev and his team invented the strategic high-octane jet fuel B-78. The Soviet army has got over a million tons of B-78 fuel throughout the war. Baku became the primary strategic goal of Hitler's 1942 Fall Blau offensive. The German army was at first stalled in the mountains of Caucasus, then decisively defeated at the Battle of Stalingrad, and forced to retreat.

More than 130 types of weapons and spare parts were produced in Azerbaijan throughout the years of war, including the Katyusha rocket, the Shpagin machine gun, and the Yak-3 fighter jet. Ships and submarines were repaired at shipyards and tanks at factories, at a time when farms churned out 500,000 tons of cotton.

Dozens of hospitals in Azerbaijan received soldiers with severe combat wounds for treatment. Over 1.5 million soldiers were treated in that military clinics and sent back to frontiers.

Azerbaijan's territory was crucial in providing the Soviet forces with American and British supplies under the Lend-Lease program, a United States program to provide its allied nations with aid and military supplies needed to win World War II. The resistance against the Nazi invasion received a boost from the successful transportation of aid and military material by Baku Flotilla, railway and other transport enterprises through Iran via Azerbaijan into the Soviet Union.

Solemn celebration of the 75th anniversary of the Great Patriotic will not take place in Azerbaijan as the country is currently under lockdown due to the coronavirus outbreak. The special quarantine regime applied in the country prohibits mass gatherings in any kind of ceremonies until May 31, when the lockdown is expected to wrap up.

Defeating Nazi Germany and putting an end to the Great Patriotic War, otherwise known as World War II, certainly took its toll on the USSR, which lost nearly 27 million people, while Russia suffered the highest number of casualties among all nations involved, with 21 million. The Soviet Union spent over $192 billion on the war effort.

Although one million German soldiers and their allies achieved a series of victories, the Battle of Stalingrad, fought between 1942 and 1943, fundamentally changed the course of Germany’s fate in the Soviet Union. The battle, which took the lives of around two million people, is remembered as the bloodiest in history, yet the Battle of Stalingrad is considered to be the definitive turning point where the Soviet troops dealt their German counterparts a crushing defeat. From that point on, the Soviet Union put Germany on the defensive until the Battle of Berlin that ended the war.

By 1942, Russia were producing mass quantities of high-quality armaments east of the Ural Mountains that were out of reach for Germany’s air force. The Soviets also possessed a tremendous overseas intelligence-gathering operation, via the international Communist movement. If the German army had not been tied down in the Soviet Union in a huge battle of attrition that they could not hope to win, Victory Day would have certainly been vastly delayed.

Traditionally, tens of thousands of people march in Moscow and cities around the world to commemorate relatives who fought in World War II. The tradition called the Immortal Regiment has grown every year since it began in 2012. This year, Russians will mark the occasion by watching an online broadcast.

With Moscow's 12.5 million residents self-isolated at home in an effort to curb the spread of the coronavirus, the Russian government decided to postpone this year's parade that was to commemorate Victory Day. While the main parade in Moscow has been postponed, several events are set to take place without the public or via online broadcast.

"Seventy-five jets and helicopters will fly over Red Square in a single formation," Interfax quoted Defense Minister Sergei Shoigu as saying earlier this week. "There are also planned flyovers in 47 cities across the country and at Russian military bases abroad."

One part of this year’s Victory Day celebrations that was not affected by the Covid-19 outbreak was the fireworks display that traditionally marks the end of celebrations.

Over the four years of fighting, Kazakhstan dispatched 20 percent, or 1,196,164, of its citizens to the frontlines, where 601,939, or 12 percent of the population died, did not return from captivity, or went missing.

‘‘The war affected almost every Kazakh family, that is why May 9th is a Memorial Day for us,’’ Kazakhstan's President Kassym-Jomart Tokayev said in an interview with Russia-based Mir24 TV channel on May 1.

In the first few months of the war, much of Russian, Ukrainian and Belarusian industry was relocated to Kazakhstan. Before 1941, the Central Asian country owned only six military-oriented plants and specialized manufactories. After 1941, this figure amounted roughly 300, including a range of industrial plants evacuated from Russia’s territories. Kazakhstan produced 85 percent of the Soviet lead, topping the list of lead producers. Nine out of 10 bullets were made with lead produced in Kazakhstan during World War II.

Much of Soviet theaters and film studios, including Mosfilm and Lenfilm, were also relocated to Kazakhstan during the war.

What is now considered the largest and wealthiest country of Central Asia sheltered many filmmakers, musicians, writers and poets, such as Sergei Eisenstein, Russian film director and theorist whose work includes the three classic movies Battleship Potemkin; Sergei Prokofiev, who is considered one of the giants of 20th-century music, and many others.

Every year, thousands of people attend a local military parade in Nur-Sultan and watch the fireworks, while this year is an exception due to the COVID-19 pandemic.

The Turkmen Soviet Socialist Republic was one of 15 republics that formed the USSR, and – like Azerbaijanis, Russians and Kazakhs – Turkmen people commemorate Victory Day on May 9. In 2000, by a decree by the late President Saparmurat Niyazov, all victims from the war were declared National Heroes.

In the second month of the Great Patriotic War, major enterprises, educational, scientific, and cultural institutions, including Moscow State University, were evacuated to Turkmenistan. In addition, Turkmenistan has given shelter to tens of thousands of people evacuated from frontline areas. The country’s economy was totally rebuilt to meet the military demand, while 93 percent of adult population, who were not called up for service, were engaged in agricultural activities to provide the country with raw materials and food. Along with people, Turkmenistan provided the frontline with horses.

Despite global coronavirus outbreak, the government of Turkmenistan announced that the country would organize the military parade this year, and what is more — for the first time in the country’s history.