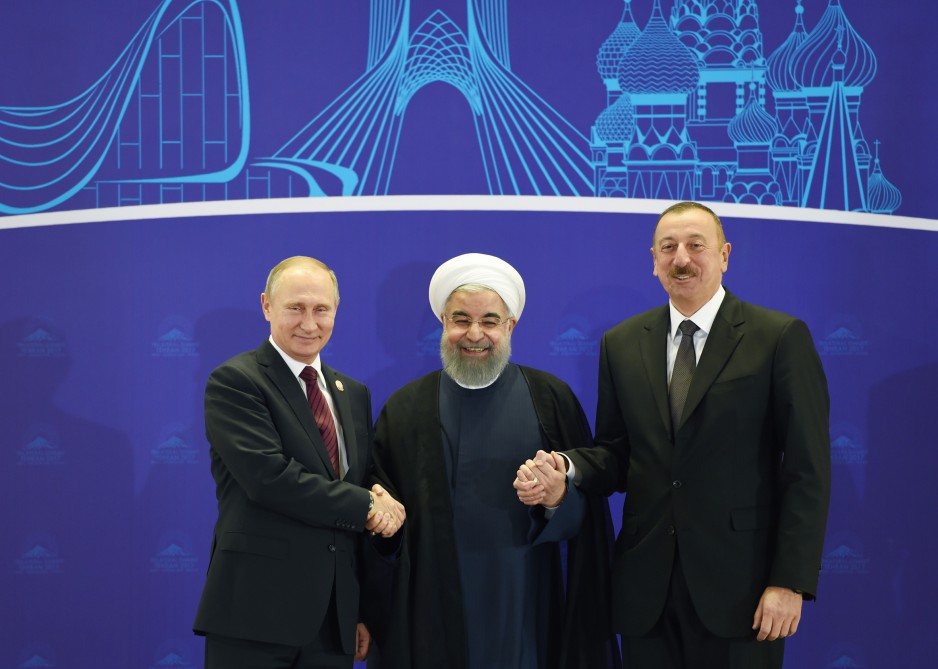 The presidents of Azerbaijan, Iran and Russia are planning to meet in the Black Sea coastal city of Sochi next month for a trilateral regional cooperation summit that is expected to center on the feasibility and construction of the International North-South Transport Corridor.

Vice-Speaker of the Federation Council of Russia Ilyas Umakhanov said the meeting between Ilham Aliyev, Hassan Rouhani and Vladimir Putin is expected to take place on August 14.

"A new format - Russia, Iran, Azerbaijan has already been developed,” Umakhanov said Tuesday in a meeting with a deputy chairman of the Assembly of Islamic Council of Iran, Massoud Perezheshkian. “As I understand, this meeting will be held on August 14 in Russia," he said, according to Interfax.

The meeting will be the third summit of its kind since 2016, when the leaders met in Baku.

“I think that the format of the presidents of the three countries, which build a kind of corridor between Iran, Azerbaijan, and Russia, up to St. Petersburg, is a win-win – everyone is interested in its acting,” Mammadyarov said, according to Interfax.

The International North-South Transport Corridor (INSTC) is a 7,200 km (4,474 mi) multi-modal network of rail, road and sea routes that can facilitate the movement of cargo from India and Southeast Asia to Russia and the Baltic Sea area. The route is expected to cut delivery time for goods traveling similar distances in half, from six weeks to three weeks, and curtail the distance by about 3,000 hm (1,864 mi).

Iranian Railways, in turn, put the 164 km (102 mi) Gazvin-Rasht line of the Rasht-Gazvin-Astara railway into operation in March. Construction of the missing segment, the Rasht-Astara line, will cost around $1 billion and allow the INSTC to pass through the Caspian region. Azerbaijan has already allocated half of the funds, $500 million, in the form of a loan to Iranian Railways. The Rasht-Astara route is expected to come online sometime next year.

After running through the Iran-Azerbaijan railway grid in the south, INSTC will reach the Azerbaijan-Russia border in the north, where it will pass through Russia and move towards Helsinki in Finland.

According to Azvision.az, Russia’s ambassador to Azerbaijan Mikhail Bocharnikov said that half of the bridge that stretches from the Samur customs checkpoint in Azerbaijan to the Yarag-Gazmalar checkpoint in the Maharramkand region of Russia’s Dagestan Republic has already been constructed. The bridge is expected to go online sometime this year, according to Russia’s Transport Minister Yevgeny Dietrich.

The INSTC is expected to carry 3 million tons of freight per year during its first stage. The annual volume of transportation will reach anywhere between five and eight million tons, eventually hitting 15 million tons per year.