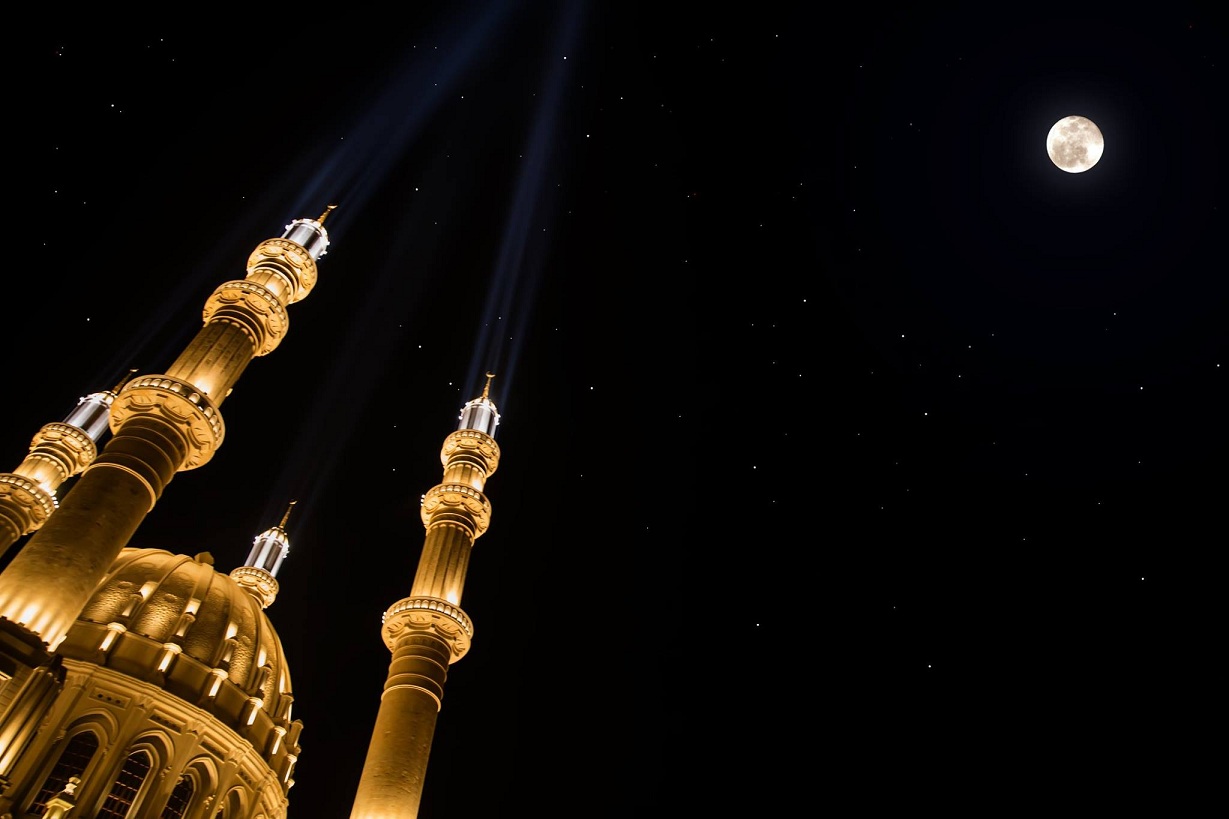 One of the largest mosques in South Caucasus, the Heydar Aiyev mosque is located in Baku, Azerbaijan / Mehdi Agayev

Muslims in nearly 50 countries around the world, including the Caspian states Azerbaijan, Iran, Kazakhstan and Turkmenistan, are welcoming the start of the Islamic holy month of Ramadan this weekend.

"Ramadan will start in Azerbaijan with the appearance of a new moon on Saturday," the Caucasus Muslims Office in Baku announced on Wednesday, describing how the exact beginning of the first month of the Islamic lunar calendar is recognized.

Because of this, the start of Ramadan sometimes differs around the world in any given year. For example, in 2017 Ramadan begins on Friday, May 26 in the United States, but in Saudi Arabia it starts on May 27, and will last through June 25.

The month is considered a time to cleanse the soul, focus on God, and mark a new beginning for the year ahead. The faithful fast from sunrise until sunset, abstaining from all food and drink, including water, sexual activity, unkind or impure thoughts and words, and immoral behavior. Muslims are also urged to have increased empathy towards the needy and less-fortunate, and donations to charity and food drives are encouraged.

"Muslims in Azerbaijan have traditionally followed Ramadan principles, particularly the tradition of fasting. Despite this year's Ramadan falling within what are expected to be hot summer days, most Muslims in the country say it that will not deter them from feeling the material and moral benefits of the holy Ramadan days," Shahin Hasanli, an Islamic theologian at the Caucasian Muslims Office in Baku, told Caspian News.

Islam is the dominant religion in four out of the five Caspian states, with the exception of Russia, which has a Muslim population between ten and 15 percent. In Azerbaijan, a constitutionally secular country, Muslims comprise 97 percent of the population of nearly 10 million.

In Iran, the only country in the Caspian where Islam is the official religion, daily fasting throughout Ramadan is mandatory, and noncompliance can be met with strict punishment.

"In Iran, breaching Ramadan traditions can result in serious punishments and penalties,” Salim, a resident of Iran's Tabriz explained. One could be whipped, fined and put in jail for violating fasting from imsak [start of fasting, in the morning] to iftar [breaking fast, in the evening]. However, tourists and non-believers of Islam are just subject to warnings and sometimes fines.”

Muslims in Kazakhstan account for 70 percent of its population of 18 million, while in neighboring Turkmenistan Muslims are nearly 90 percent of about five million. Both countries recognize the start of the month with public holidays, beginning this Saturday.

“We have a full control over our passions during Ramadan. Because devil is chained during this month, he cannot foment hatred and hostilities. It makes us more and more close to God,” Murad, a 28 year-old advertising agent in Baku, told Caspian News.

Constantin, a Russian and non-Muslim living in Baku, told Caspian News how he observes Ramadan while living in a Muslim-majority country.

“Two of my workmates will fast during the month. I’ll help them push through it,” he said jokingly. “I will not be drinking or eating in front of them, as a sign of respect for their beliefs. Ramadan strengthens our friendship,” he said.”

While for the majority of the Muslim faithful the month is a time of peace, respect, and friendship, Ramadan has in recent times acquired a negative reputation, as terrorist organizations around the world have exploited it.

Abu Muhammad al-Adnani, the spokesman for the Islamic State (IS), for example, released an audiotape in May of last year, in which he called for terrorists attacks:

“Ramadan, the month of conquest and jihad. Get prepared, be ready ... to make it a month of calamity everywhere for the non-believers ... especially for the fighters and supporters of the caliphate in Europe and America.”

As a result of al-Adnani’s call, IS operatives conducted a series of attacks in locations worldwide, including in the US, France, Turkey, Jordan, Iraq and Bangladesh. Most attacks fell on July 2, 2016, coinciding with the twenty seventh day of Ramadan, or the "Night of Power," when Muslims believe the first revelations of holy Quran were delivered by the God to the prophet Mohammed.

But Shahin Hasanli, like many others, rejects any association of Islam with terrorism.

“There is no sign of any violence in Islam’s history,” said Hasanli. “Those radical groups try [with all their efforts] to discredit Islam’s real nature. This is forgery, this is stupidity, and this is a deliberate purpose to raise misconceptions about Islam,” Hasanli said.

“Ramadan advocates merci, friendship, empathy, love and respect. But, they [radical groups] kill those, including Muslims and members of other beliefs, who don’t share the same hazardous religious views with them. Islam and its holy Ramadan have nothing to do with such terrorist organizations, it’s impossible,” Hasanli told Caspian News.