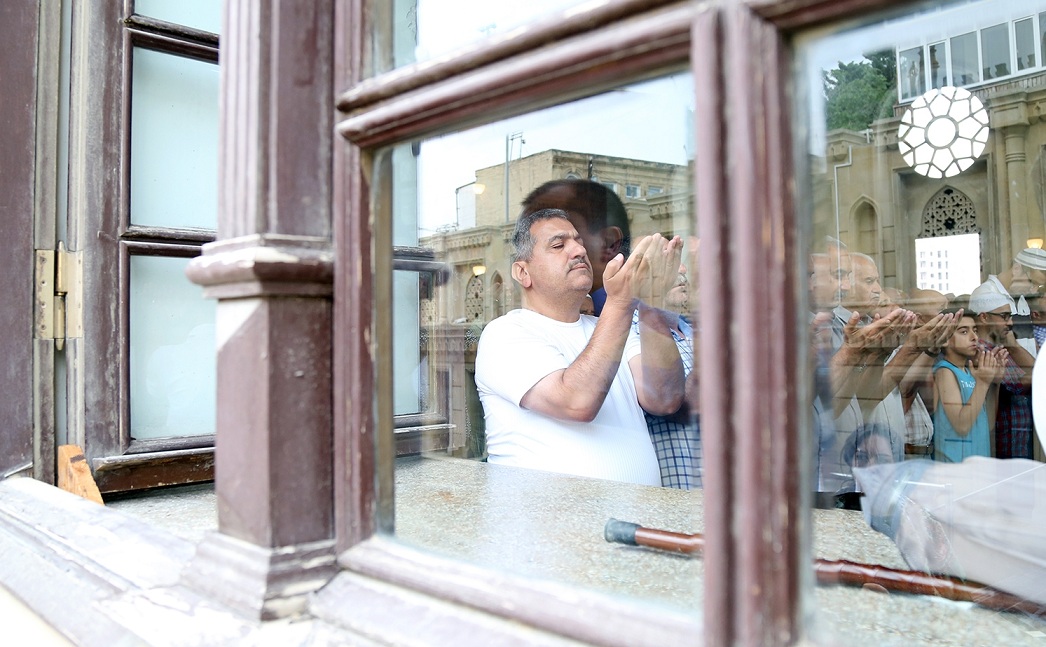 Muslims in nearly 50 countries around the world, including those in the Caspian region states of Azerbaijan, Iran, Kazakhstan, Turkmenistan and Russia, are celebrating the Eid al-Fitr holiday this week, as obligatory fasting during what is considered the most sacred month in the Islamic year comes to an end.

Eid al-Fitr translates into English as “festival of the breaking of the fast,” as it commemorates the end of Ramadan, when Muslims abstain from all food and drink from dawn till dusk. The first Eid celebration dates back to the time of the Prophet Muhammad, when people gathered for prayer, congratulated each other for a month of daily fasting, and helped the poor and needy.

The start and end dates of months and religious holidays within the lunar Islamic calendar depend upon the sighting of a new moon, and thus can vary from one country to the next. Ramadan, which is the ninth month, began on May 26 this year in the Caspian. Muslims throughout the region are marking the end of Ramadan, and the start of the three-day Eid holiday, beginning today, June 26.

“Eid Mubarak,” which roughly translates to “have a blessed Eid,” is the most common greeting and congratulatory message amongst Muslims during the holiday.

Islam is the dominant religion in four out of the five Caspian states, where the number of Muslims totals over 109 million. Russia, the only non-Muslim majority country, is estimated to have a Muslim population anywhere between 10 and 15 percent, or an additional 14 to 22 million Muslims in the Caspian region.

Azerbaijan, with a population of over nine million people and where nearly 97 percent identify as Muslim, celebrates Eid al-Fitr from Monday to Wednesday, where it is considered an official holiday by the country’s constitutionally secular government. Islamic traditions in Azerbaijan, including Ramadan fasting and Eid al-Fitr celebrations, are regulated by the Caucasian Muslims Office.

“Eid al-Fitr is a reward from the almighty Allah for our month-long fasting,” Khayyam, a restaurant owner in Baku told Caspian News. “It shows us how to be a good Muslim, how to appreciate the days of hunger and days of abundance, how to express sympathy towards our needy brothers and sisters.”

More than 70 percent of Kazakhstan’s population of 18 million are Muslim, making it the third largest Muslim population in the Caspian, after Iran and Russia. Turkmenistan, which lies to Kazakhstan’s south and is also situated along the eastern shore of the Caspian Sea, has a population of about 4.7 million Muslims, or 90 percent of its total. Both countries share almost the same congregational and social Eid ceremonies.

Zhamilya, from Karaganda city in Kazakhstan, says Eid symbolizes tolerance, brotherhood, and solidarity in her country.

“Muslims in Kazakhstan celebrate Eid for three days. They go to the mosque where they listen to wagyz (lectures by the imam, or spiritual leader), and read prayers to God and their deceased relatives,” Zhamilya told Caspian News. “While visiting a mosque they bring homemade baursaks and shelpeki (traditional Kazakh breads), where every Muslim in the house of Allah can taste that bread. This is meant to demonstrate tolerance, brotherhood and friendship.”

“Each house has a dastarkhan, that is, a festive table with Kazakh national dishes, as relatives, friends, and neighbors visit and congratulate each other these days,” she added.

In Iran, where 99.4 percent of its nearly 83 million citizens are Muslim and are governed by a Shia interpretation of Islamic law, Eid celebrations are obligatory.

Bahram, a taxi driver in Tabriz, says Eid in his city starts with prayers at the largest Mosque in Tabriz, where almost the entire population converges.

“Eid celebrations then continue in homes. Dried dates must be on holiday tables,” Bahram said, noting a traditional food of Bedouin tribes that roamed the deserts of Arabia, where Islam was founded. “Some people add fruits and candies. Relatives gather around the holiday table to exchange congratulatory messages.”

“People in the streets also congratulate each other,” Bahram said. “The city embraces a stronger atmosphere of solidarity during Eid.”

With the end of Ramadan comes the start of Shawwal, the tenth month in the Islamic calendar that includes the Eid holiday. Although Muslims are prohibited from fasting during Eid al-Fitr, they are allowed to voluntarily fast throughout the six days following Eid, which is said to bring extra blessings from Allah.