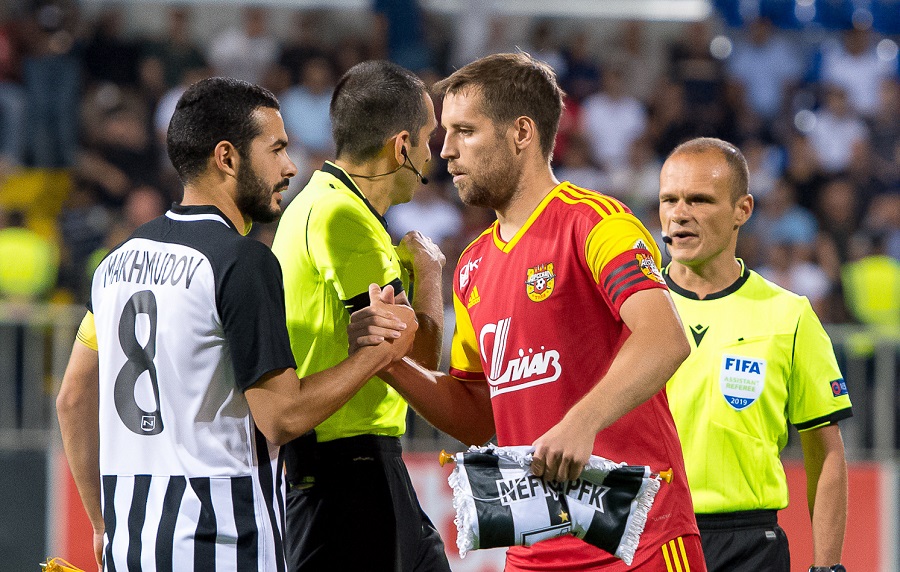 The Azerbaijani football (soccer) team Neftchi, along with Kazakhstan’s team Astana and Russia's Spartak, will hit the field for the third qualification round in the UEFA Europa League.

On Thursday, Neftchi crushed the Russian team Arsenal, scoring two goals in the second half of the game and another during stoppage time, beating the Russian team for the second time in a row. Midfielder Emin Mahmudov, age 27, scored the first goal during the 49th minute of the game, held in Bakcell Arena in the country’s capital city Baku.

“They played very well in defense, but we did not let the opponents show their game,” said Mahmudov after the match, according to reports by Azerisport. “At the same time, they counterattacked well. Anything could happen, but we did not give them a chance in an attack.”

Goals by Brazilian winger Dario Frederico in the 89th minute of the game and the Azerbaijani midfielder Rahman Hajiyev in the dying 93rd minute helped the Azerbaijani team secure their place in the third qualifying stage of this year’s Europa League. Arsenal, on the other hand, said goodbye to the league until next season.

The Azerbaijani team will next square off against Israel’s Bnei Yehuda at the Bakcell Arena stadium in Azerbaijan on August 8. The return match will be held in Tel Aviv on August 15. The winner of that game will move on to the playoff round within the Europa League.

As the home team, Astana claimed a crushing victory over Santa Coloma, scoring four goals on August 1. Playing in front of 30,000 fans, Icelandic midfielder Rúnar Már Sigurjónsson scored the first goal in the 24th minute of the game, followed by a hat-trick by Croatian winger Marin Tomasov in the 73rd, 79th and 94th minute.

“It would be a shame to lose. Not even a shame. This would mean that we all should leave football, finish and go home,” Tomasov said on Thursday according to reports by Sports.kz.

The first game that took place in Andorra la Vella ended in a draw.

During the third qualification round, Astana will play against Malta’s Valletta. The first match will be held in Kazakhstan on August 8, while the return game will take place in Malta on August 15.

Russia's Spartak had secured its place in the third qualification round after ranking fifth within 2018–19 Russian Premier League. The team from Moscow will face Switzerland’s Thun on August 8, and again on August 15.