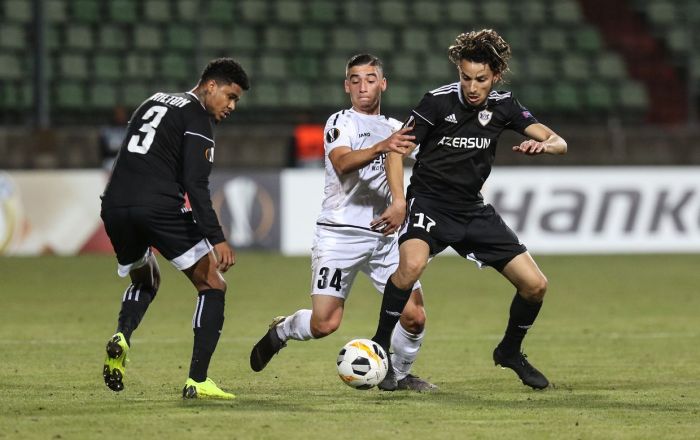 Qarabağ is the only Azerbaijani team to compete in the Europa League this year, having joined the competition after dropping down from the Champions League

Football (soccer) teams from Azerbaijan, Russia and Kazakhstan continue their second leg matches in the group stage round of the 2019/2020 UEFA Europa League – some are successful, and some not.

Azerbaijan’s team Qarabağ was able to pull off a headline-grabbing win against Luxembourgish Dudelange. Abdellah Zoubir broke Dudelange’s short resistance in the eleventh minute of Thursday’s game, followed by another goal scored by Míchel in the 30th minute. Qarabağ’s third goal came in the 37th minute, from the penalty spot, with midfielder Richard Almeida de Oliveira. Dani Quintana scored the last fourth goal in the second half of the game, crushing the team from Luxemburg. Antoine Bernier scored the only goal for the Luxembourgish team.

Qarabağ is the only Azerbaijani team to compete in the Europa League this year, having joined the competition after dropping down from the Champions League.

The team remains second in Group A, three points above Apoel Nicosia, which is the next rival of the team in the two upcoming games. Previously, Qarabağ lost to Sevilla and should again meet the Spanish team within the group. The Azerbaijani team will also once again play with Dudelange.

Meanwhile, the odds were against Russian and Kazakhstani teams this Thursday.

Russia’s Krasnodar lost to the Spanish Getafe in the second leg of the Europa League group stage. Rodriguez Angel scored two goals for Getafe on the 35th and 61st minutes, respectively. Russia’s Ari scored for Krasnodar in the 69th minute. As a result, Russia’s team lost the second match in a row after it was defeated by the Swiss Basel. After two games, Krasnodar did not score points and ranks lowest in Group C.

On Thursday, CSKA Moscow lost to Spanish Espanyol. The first goal for Espanyol was scored by striker Wu Lei in the 64th minute of the game, and followed by a goal by Victor Campusano. In the next round, CSKA will face Ferencvárosi from Hungary in Moscow on October 24.

Kazakhstan’s Astana also wasn’t as successful as Qarabağ in the Europa League group stage’s last game after losing to Partizan from Serbia. Although Thursday’s game ended with the Partizan’s triumph, Astana will play another four games with its rivals – Manchester United, Alkmaar, and Partizan.

Meanwhile, two Russian teams – Zenit and Lokomotiv – played this week within the group stage of the 2019/2020 UEFA Champions League.

Zenit triumphed Wednesday over Portugal’s Benfica after Artyom Dzyuba and Sardar Azmoun scored two goals for the Russian team. Ruben Dias from Benfica helped Zenit after scoring an own goal in the second half of the game. Following the game, Zenit and French Lyon share the top position in Group G with four points each. On October 23, Zenit will face Germany’s Leipzig.

At the same time, Lokomotiv Moscow lost to Atletico Madrid on Wednesday and dropped down to the third position in Group D.