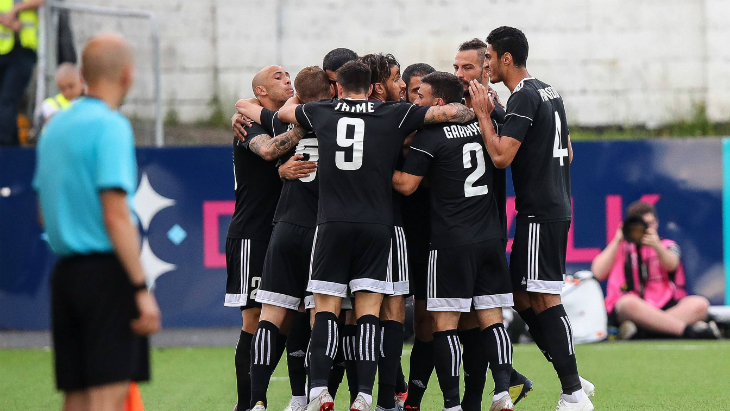 Qarabağ from Azerbaijan scored a 2-1 home victory over Northern Ireland’s Linfield in the second game of the two-legged playoff tie, held at Tofig Bahramov Stadium in Baku.

Two Caspian football (soccer) teams, Qarabağ and Astana, have made it to the UEFA Europa League group stage after beating their rivals in matches held on August 29.

Qarabağ is the only Azerbaijani team to compete in the Europa League this year, having joined the competition after dropping down from the Champions League, in which it lost 2-3 on aggregate to Cyprus’ Apoel.

“Our fans supported us well even after the defeat from Apoel,” Qarabağ’s manager Gurban Gurbanov said at the post-match press conference, according to reports by Azerisport. “There was a lot of pressure over us, because we are the only Azerbaijani team to compete in the European League. In such a situation, it’s not easy to train the players.”

Kazakhstan’s Astana was successful in the Europa League group stage thanks to its aggregate victory over BATE from Belarus. Although Thursday’s game ended with the BATE’S triumph, Astana managed to progress as the team from Kazakhstan showed best results, scoring 3-0 during the previous game held on August 22.

Russia’s Spartak, however, failed to reach the group stage after the team lost 1-2 to Braga from Portugal. Spartak’s fans reportedly began to leave the stadium after the first half of the game, and Zelimkhan Bakayev’s goal in the 89th minute came up short. Two other teams from Russia – CSKA and Krasnodar will also join the group stage.

According to the UEFA regulations, the group stage will see 48 entrants, including 17 teams who qualified automatically (CSKA), 21 teams who advanced from the play-off round, 6 teams who transferred from UEFA Champions League play-off round (Krasnodar) and 4 teams who transferred from Champions League third qualifying round. The teams have been split into four seeding pots based on their club coefficients. No teams from the same country can be in one group, according to the UEFA format.