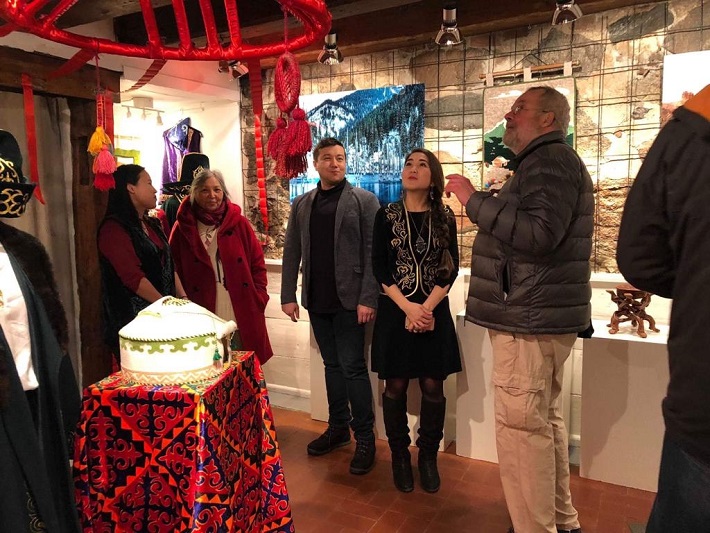 Vasteras, a small town located 100 kilometers from Stockholm, is home to more than 300 Kazakhstanis, who moved there in the 1970s from Turkey in search of work. Many of the pieces in the exhibits have been provided by them, from their personal collections. / KazInform

A selection of costumes, photographs, household goods and musical instruments from Kazakhstan went on display in Stockholm last week, bringing a taste of Caspian culture to the Swedish capital.

A seven-day exhibition dubbed “At Nomads’ House” was arranged to promote Kazakhstani history and Kazakh culture in Sweden, at locations such as the City Hall of Stockholm, Kazakhstan’s embassy and the “Youth of Kazakhstan in Sweden” association. The exhibition runs until December 20.

“We set a goal to acquaint the Swedes with the Kazakh culture. The diaspora, most of which resides in the city of Vasteras, helped us very much in this issue,” Aydan Bekbergenova, the head of the association said according to reports by Kazinform.

Vasteras, a small town located 100 kilometers from Stockholm, is home to more than 300 Kazakhstanis, who moved there in the 1970s from Turkey in search of work. Many of the pieces in the exhibits have been provided by them, from their personal collections.

“They are very careful about the Kazakh culture. It was them who provide us with traditional handmade quilts, items of national clothing and some other attributes,” Bekbergenova added.

According to the organizers, the exhibition aroused great interest among the locals and tourists. While some emotionally demonstrated their admiration, other asked about the meaning of patterns, the practical application of the elements of the yurt – a portable, round tent covered with skins or felt and used as a dwelling by nomads in the steppes of Central Asia. Some visitors to the exhibition said they would like to visit Kazakhstan, especially since the EU residents do not need visa to travel to Kazakhstan.

Meanwhile, attendees at the exhibition had an opportunity to taste some national cuisine, including baursaks, a soft, fried dough; samsa, a savory meat pastry; and Kazakhstani chocolate, nuts, dried apricots and raisins.

“Baursaks were swept off, while kurt is treated cautiously,” the head of the Kazakh association in Sweden said, mentioning a traditional Kazakh snack made from dried salty cheese.

Bekbergenova, who leads the organization, has said the group intends to host a major celebration of the Nauryz holiday in the city of Vasteras next spring. Novruz, which means “new day,” is celebrated on March 21, the date of the vernal equinox, in some countries of Western and Central Asia, and South Caucasus. The date marks the start of spring according to the astronomical solar calendar.

“We are working to agree on the rental of the main concert hall in Vasteras, which seats 900 people. There we will hold a big concert in honor of Nauryz with the participation of musical groups,” Bekbergenova told Kazinform.