By Gunay Hajiyeva and Vusala Abbasova and Orkhan Jalilov March 20, 2022 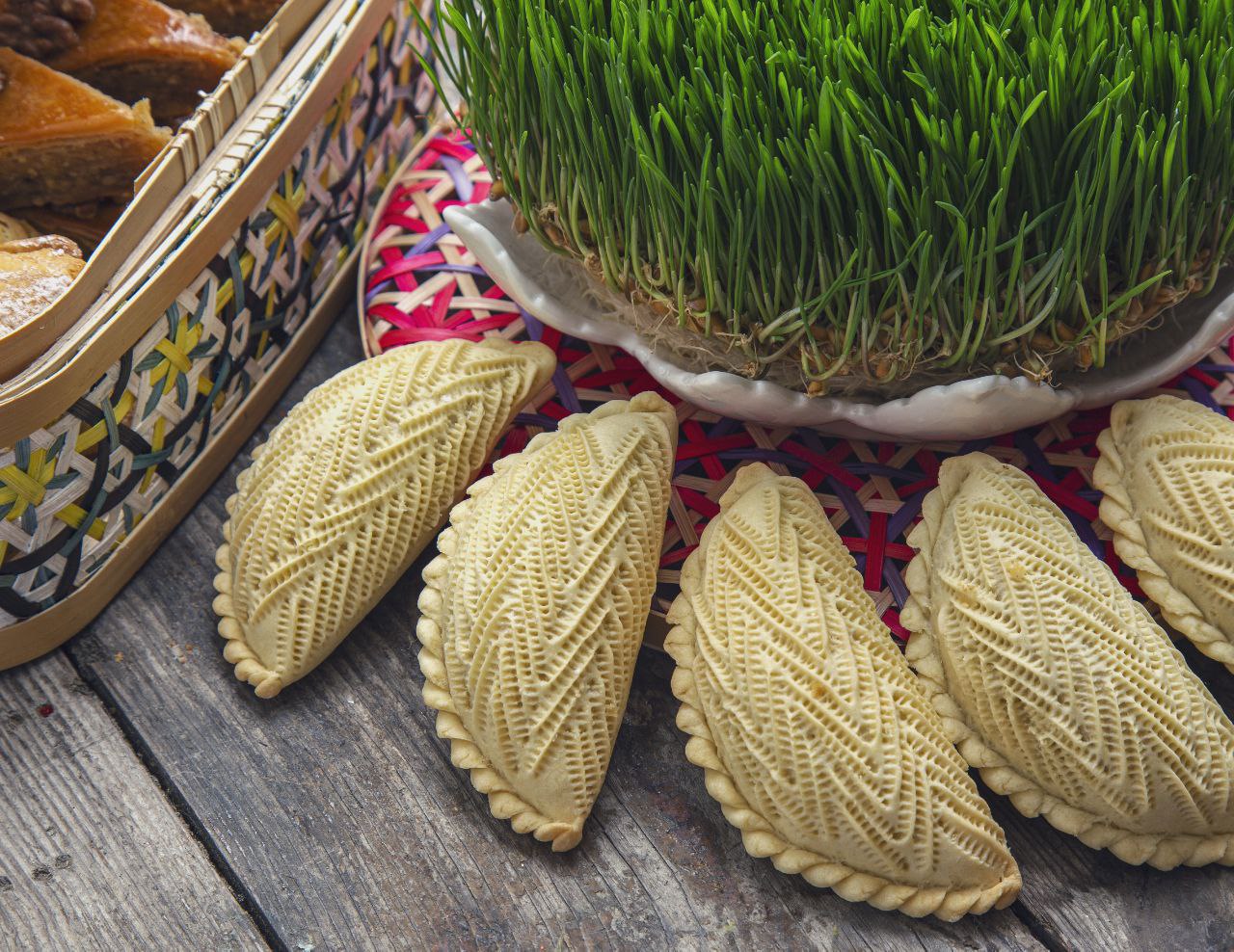 The traditional festive table featuring peculiar dishes and pastries is probably the most specific attribute of Novruz Bayramı in Azerbaijan, including shakarbura which symbolizes the half-moon and its light / Courtesy

Millions of people from around the world are welcoming the arrival of spring with an ancient but popular holiday known as Novruz, and those living in the Caspian Sea coastal countries are no exception.

Novruz, which means “new day,” is celebrated on March 21, the date of the vernal equinox considered the end of winter and the start of spring according to the astronomical solar calendar. The holiday with more than 3,000-year-old roots brings people together, and it is a great chance to spend time with friends and family, visit relatives and neighbors, lay lavish tables with national flavors, and play traditional games.

However, despite similarities, there are many peculiar traditions specific to the various ethnicities found in the Caspian region.

Azerbaijanis celebrate this holiday at their own homes because of folk belief, which says that a person celebrating Novruz outdoors will spend the whole year on trips away from home.

The traditional festive table featuring peculiar dishes and pastries is probably the most specific attribute of Novruz Bayramı in Azerbaijan. Such as pastries like pakhlava, shakarbura, goghal and badambura, and national versions of plov, or pilaf, made with rice are a “must-have” at Novruz. Khoncha is an epicenter of a festive table — a tray filled with pastries, various kinds of nuts, dried fruits, candies, and colored eggs attract both children and adults. Samani, green shoots from wheat seeds, is a traditional Novruz symbol that represents the revival of nature and an essential attribute of khoncha.

As a tradition, children place their hats on a neighbor’s doorstep before hiding, in the hopes of being given some sweets in exchange for a child’s prank. Various fortune-teller rituals are also an inseparable part of Novruz celebrations in the country. Don’t be surprised if you meet a person eavesdropping at someone else’s door — he or she is really trying to hear what the house owner talks about — but not with bad intent. If the discussion is positive, good things will happen to the listener, otherwise, rainy days are coming.

Jumping over the holiday bonfire is one of the core traditions attributed to Novruz. According to folk beliefs, those who jump over the bonfire three times and wish to get rid of problems, pain, and misfortune can feel their wishes coming true throughout the year.

It is the second Novruz holiday that is celebrated in Azerbaijan's Karabakh region after nearly 30 years of its illegal occupation by Armenia. In late 2020, Azerbaijani forces put an end to Armenia’s decades-long illegal occupation in the Karabakh region in 44 day-long counter-attack operations dubbed “Iron Fist.” The war ended in a tripartite ceasefire statement signed on November 10, 2020, by Armenia, Azerbaijan, and Russia. By this time, Azerbaijani forces liberated more than 300 settlements, including the cities of Jabrayil, Fuzuli, Zangilan, Gubadli, and Shusha, from nearly 30-year-long illegal Armenian occupation. Armenia also returned the occupied Aghdam, Kalbajar, and Lachin districts to Azerbaijan by December 1, 2020, as part of the obligations it took under the ceasefire deal.

Today, Novruz celebrations are taking place across all liberated regions amidst the major restoration and reconstruction works.

Kazakhstanis treat themselves with various delicious dishes. The Kazakhstani festive dastarkhan is the dream of any gourmet with its pilaf, baursaks – rounded or diamond-shaped fried dough – and Nauryz kozhe, or a special soup.

Kazakhs believe that this nutritious soup is a symbol of abundance. Although each family can cook it in its way, in its classical recipe Nauryz kozhe features seven ingredients, including water, meat, sorpa (broth), grains, milk products, fat, and salt. Having tasted this soup for the first time, it is important not to forget to make a wish, as Kazakhs say that it will come true.

In Turkmenistan, there is a tradition to celebrate Novruz collectively and give gifts to one other, as they believe this holiday brings people closer together. People enjoy sports competitions, trade fairs, theatrical performances, concerts, various exhibitions and outdoor festivities, and residents cooking a traditional meal of mutton shurpa and pilaf.

The most popular entertainment in Turkmenistan is horse racing. Turkmens, who take great pride in their horse breed known as Akhal-Teke, or golden horses, decorate the animals with an expensive harness and cover their elegant torsos with embroidered blankets as they are paraded into competitions.

The festive menu in Turkmenistan includes dishes mainly made from cereal grains, milk and lactic acid products. Novruzyarmasy or the New Year pottage is a festive meal with a simple recipe. To cook this dish, one needs to add a chop of selected wheat grains to the boiling meat broth and then boil for 3-4 hours until ready. Gourmets may add dried candied fruit, black ground pepper, and various spices if needed.

Although Russia is predominantly Russian Orthodox, celebrating the arrival of spring is very important for some nations living in Russia. Every year, Muslim societies with ethnic Turkic roots living in Russia’s Tatarstan, Bashkortostan, and other regions, welcome the start of spring with a grandiose extravaganza.

In Tatarstan, which is located at the confluence of two biggest rivers — the Volga and the Kama, thousands of people representing various nations and diasporas usually gather on the central square in the capital city of Kazan to plunge into massive festivities featuring a series of concerts and other entertainment activities.

If you are happened to be in Kazan, you might get the chance to join the festival of pilaf. The guests usually try the dish, vote for the best recipe, and the chef then gets a prize — kazan, a cauldron which is used to cook this dish. In addition to pilaf, one of the main dishes of Navruz, sumalak made from sprouted grains of wheat, are served at the festival.

For those living in Iran, Nowruz is the first day of the first month known as Farvardin. To celebrate this holiday, people in Iran arrange seven symbolic items on their tables, whose Persian names begin with the letter sin in the Persian alphabet. These are sabzeh (wheat, barley, mung bean, or lentil sprouts grown in a dish), samanu (wheat germ sweet pudding), senjed (oleaster), serkeh (vinegar), seeb (apple), seer (garlic), and somāq (sumac).

The fire festival is another Nowruz custom in Iran. Also known as Chaharshanbeh Suri, the festival is held on the last Tuesday of the year, with both children and adults jumping over small bonfires trying to purify against evil and misery.

The 13th day of the Iranian New Year is called Sizdah Bedar and marks the end of the nearly two-week-long celebrations. It is spent mostly outdoors when people leave their houses to picnic with family and friends.