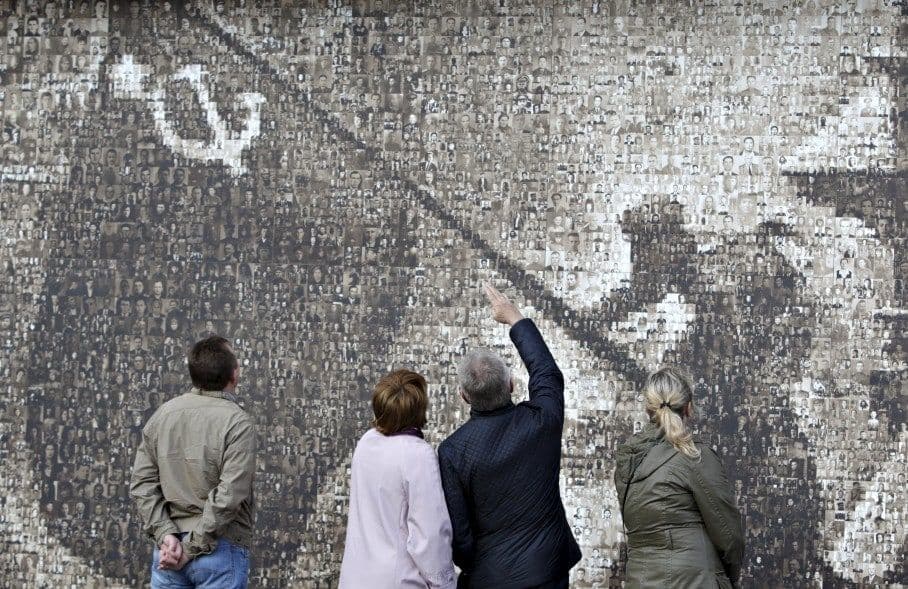 People look at photos on the "We have won!" memorial panel in Stavropol, Russia May 5, 2015. The panel shows the famous Soviet picture "Flag above the Reichstag" made from 4,222 portraits of defenders of their Motherland during World War II from Stavropol, local media reported / Eduard Korniyenko / Reuters

World War II is part of world history, but it is remembered in different parts of the world. The Soviet Union witnessed some of the worst horrors of World War II. Known as the Great Patriotic War in post-Soviet countries such as Russia, Azerbaijan, Kazakhstan and Turkmenistan, the war is remembered as the defeat of Adolf Hitler’s fascist movement. The end of one of the 20th century’s most horrific wars occurred 74 years ago today – a day celebrated as “Victory Day.”

For the Soviet Union, the war started on June 22, 1941, when German Nazi forces hit the USSR in a biltzkrieg, or “lightning war,” violating the Molotov-Ribbentrop treaty signed between Germany and the Soviet Union in 1939, which had ensured that neither country attacked the other. The four years of fighting claimed lives of 27 million people from the USSR, and the greatest number of casualties were Russian, standing at 21 million. The Soviet Union spent over $93 billion on the war effort.

Caspian News has captured some of the most significant contributions of the post-Soviet nations that today make up the region.

Manpower, along with the oil, defense, chemical, agricultural and mining industries of Azerbaijan played an unmatched role in the Soviet Union’s victory over Nazi Germany during the Great Patriotic War. Over 700,000 were sent to frontline units, and about half of them died in service. The 77th, 223rd, 271st, 402nd and 416th frontline divisions of the Soviet army each consisted of Azerbaijani soldiers. The 416th division reached Berlin, from its home in the Caucasus. But sacrifice did not end with people.

Around 70 to 75 percent of Soviet oil and between 85 and 90 percent of its gasoline were supplied by Baku to the frontlines. From 1941 to 1945, the units received 75 million tons of oil and 22 million tons of gasoline. The Azerbaijani chemist Yusif Mammadaliev organized the production of 38 types of fuel, eight types of diesel, and various compounds of gasoline for nine types of aircraft, and the famous Molotov cocktail. Baku is reported to have produced 10,000 Molotov cocktails per day. Mammadaliyev and his team invented the strategic high-octane jet fuel B-78. The Soviet army has got over a million ton of B-78 fuel throughout the war. Baku became the primary strategic goal of Hitler's 1942 Fall Blau offensive. The German army was at first stalled in the mountains of Caucasus, then decisively defeated at the Battle of Stalingrad and forced to retreat.

More than 130 types of weapons and spare parts were produced in Azerbaijan throughout the war years, including the Katyusha rocket, the Shpagin machine gun and the Yak-3 fighter jet. Ships and submarines were repaired at shipyards and tanks at factories, at a time when farms churned out 500,000 tons of cotton.

Dozens of hospitals in Azerbaijan received soldiers with severe combat wounds for treatment. Over one million and a half soldiers were treated in that military clinics and sent back to frontiers.

Azerbaijan's territory was crucial in providing the Soviet forces with American and British supplies under the Lend-Lease program, a United States program to provide its allied nations with aid and military materiel to win World War II. Resistance against the Nazi invasion has got a boost thanks to successful transportation of aid and military materiel by Baku Flotilla, railway and other transport enterprises through Iran via Azerbaijan's territory into the Soviet Union.

In 2015, the Heydar Aliyev Foundation released a documentary titled “Target – Baku,” which was dedicated to the 70th anniversary of the Great Patriotic War victory. The film examines the role of Azerbaijanis and the importance of Baku’s oil reserves to the Soviet Union in defeating the Nazis.

Shortly after Nazi Germany invaded the Soviet Union in 1941, Kazakhstan mobilized its economy in support of the war effort. Much of Russia’s industry was relocated to Kazakhstan during the war, as Nazi armies threatened to capture the Soviet industrial centers located in the European part of the country. While Kazakhstan operated only six military-oriented plants and specialized manufactories before the war, after 1941 this figure amounted roughly 300, including a range of industrial plants evacuated from Russia’s territories.

Over the four years of the war, industrial production in Kazakhstan increased by 37 percent, and Kazakhstan topped the list of lead producers by manufacturing 85 percent of the Soviet lead. Nine out of 10 bullets were made with lead produced in Kazakhstan during World War II.

The war affected every Kazakh family; those remaining in rearward worked in factories and gathered funds in order to send them to the front. In addition, Kazakhstani people raised money for the construction of tanks and aircraft. The well-known Kazakh wrestler and world champion in Greco-Roman wrestling Kazhymukan Munaitpasov handed over 100,000 rubles to country’s defense fund from personal savings.

When the war broke out, the old athlete organized a circus and toured the villages of Kazakhstan. The money collected on a tour was handed over for the purchase of U-2. This aircraft, piloted by Kazhytay Shalabayev, fought on the Baltic and Leningrad fronts, carrying out 217 sorties.

The biggest spectacle in the Caspian region to mark Victory Day is in Russia, where the memory of soldiers who left their homes to defeat Nazi Germany is still a part of the collective psyche. Every year on May 9, military parades and festive salutes throughout the country are held. In Moscow's Red Square, thousands of service members will march through the city center to mark the 74th anniversary of the Soviet Union's victory, showcasing the newest military equipment produced by Russia.

More than 13 thousand personnel, over 130 units of military equipment and 74 aircraft and helicopters will take part in the massive military parade led by Commander-in-Chief of the Russian Land Forces Colonel General Oleg Salyukov. When the Banner of Victory and the Russian flag appear in Red Square, Salyukov will report to Defense Minister General of the Army Sergei Shoigu that the Moscow garrison troops are ready for Victory Day. Then, Shoigu and Salyukov will ride Aurus cabriolets, which were created specifically for the event by local brand FSUE NAMI, to greet the troops.

For the first time in four years, the upgraded A-50U long-range radar surveillance and control aircraft will be demonstrated. In addition, three military transport aircraft Il-76MD, a strategic missile carrier Tu-160 and four Tu-22M3, three Tu-95MS, and many other aircraft will appear over Red Square.

On May 9, TV networks typically will broadcast Soviet films based on the events of World War II, and younger generations will honor veterans by taking part in “Immortal Regiment” marches – an annual procession of people in Moscow to commemorate their family members who participated in World War II.

The Turkmen Soviet Socialist Republic was one of 15 republics that formed the USSR, and – like Azerbaijanis – Turkmenistanis commemorate Victory Day on May 9. In 2000, by a decree by the late President Saparmurat Niyazov, all victims from the war were declared National Heroes.

Musical concerts are held at parks throughout the country, such as Altyn Asyr Park and the National Cultural Centre’s Palace of Mukams, along with sporting events.