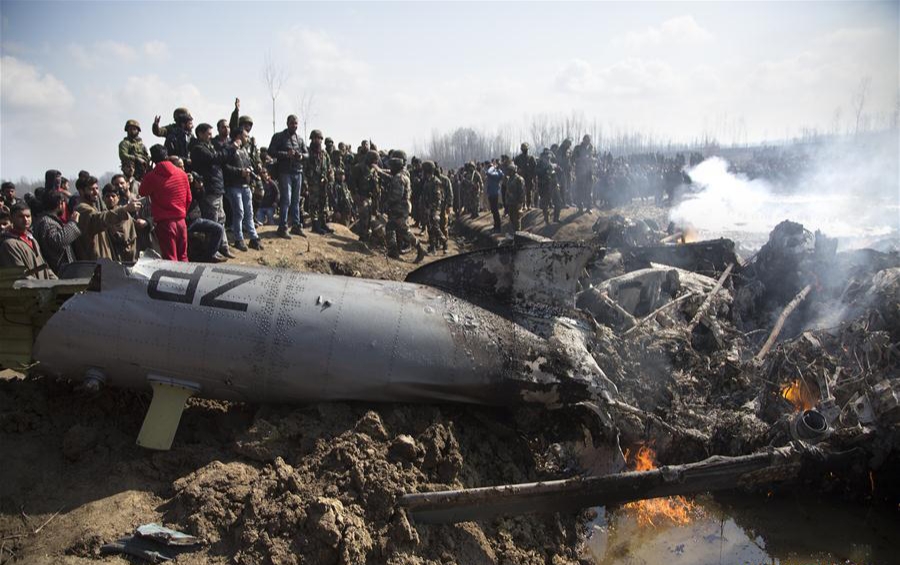 People and Indian army gather near the wreckage of an Indian aircraft after it crashed at village Garend Kalan of Budgam, about 34 km south of Srinagar city, the summer capital of Indian-controlled Kashmir, Feb. 27, 2019. / Xinhua

The Caspian littoral states have offered to play a mediatory role between Pakistan and India to end the recent escalation of tensions this week over the disputed state of Jammu and Kashmir.

“We are concerned about the escalation of tensions between India and Pakistan and the dangerous maneuvering of the two countries’ armed forces near the line of control, which risks direct military clashes,” Russia’s foreign ministry spokeswoman Maria Zakharova said on February 28 according to TASS, adding that Moscow was ready to do anything it could to help.

A day earlier Foreign Minister Sergei Lavrov said in a phone conversation with his Indian counterpart Sushma Swaraj that he hoped tensions could be de-escalated and that both countries would show restraint. Lavrov offered to play a mediatory role between the two nuclear states, Lenta.ru reported.

Military clashes broke out this week between the two long-time rivals and South Asian neighbors. Pakistan’s military said it shot down two Indian Air Force aircraft inside its airspace in Jammu and Kashmir and captured two pilots. Later Indian officials confirmed that one MiG-21 was lost, flown by Wing Commander Abhinandan Varthaman who had safely ejected before the aircraft was destroyed and was later released by Pakistan. Islamabad has not explained the discrepancy in reporting over the number of downed Indian jets.

Meanwhile, Indian officials say Pakistani fighter jets had violated airspace over Indian-controlled Kashmir but were forced back. The developments came a day after India conducted airstrikes against alleged militant positions in Pakistani-controlled Kashmir. The air raid was followed by Indian shelling in Kashmir, which left four Pakistani civilians dead.

Tensions between India and Pakistan have escalated dramatically since February 14, when Indian paramilitary forces on the New Delhi-controlled side of Jammu and Kashmir were hit by a deadly bomb attack reportedly orchestrated by Pakistan-based militants, which killed 37 Indian security forces.

In a phone conversation with his Pakistani counterpart Shah Mehmood Qureshi on February 27, Iranian Foreign Minister Mohammad Javad Zarif called on both India and Pakistan to show self-restraint and sit for talks over their disputes as soon as possible. Zarif also expressed Iran’s readiness to contribute to a peaceful settlement of differences between the two neighboring states, the official website of the Iranian foreign ministry reported.

For its part, Kazakhstan’s Ministry of Foreign Affairs expressed its concern about escalation of tensions between India and Pakistan, calling on the parties to have a constructive political and diplomatic dialogue as it is the only effective and acceptable way of solving the crisis, Tengri News reported on Friday.

“Azerbaijan supports the peaceful resolution of the Jammu and Kashmir dispute, which is indispensable for peace and security in South Asia,” the spokesperson of the Azerbaijani Foreign Ministry Leyla Abdullayeva told Trend on February 27. “Azerbaijan supports all efforts aimed at ending the violence, as well as to ensure peace, security and prosperity in the region according to the norms and principles of international law and the relevant UN Security Council resolutions.”

Since the partition of British India in 1947 and the creation of the modern states India and Pakistan, the two countries have been involved in three wars and countless standoffs near the Line of Control – the demarcation line that separates the Pakistani-controlled territories, which Pakistan calls Azad (“free” in Urdu) Kashmir and Gilgit-Baltistan, from the majority of the state, which is under India’s control. Both countries claim the state in its entirety.