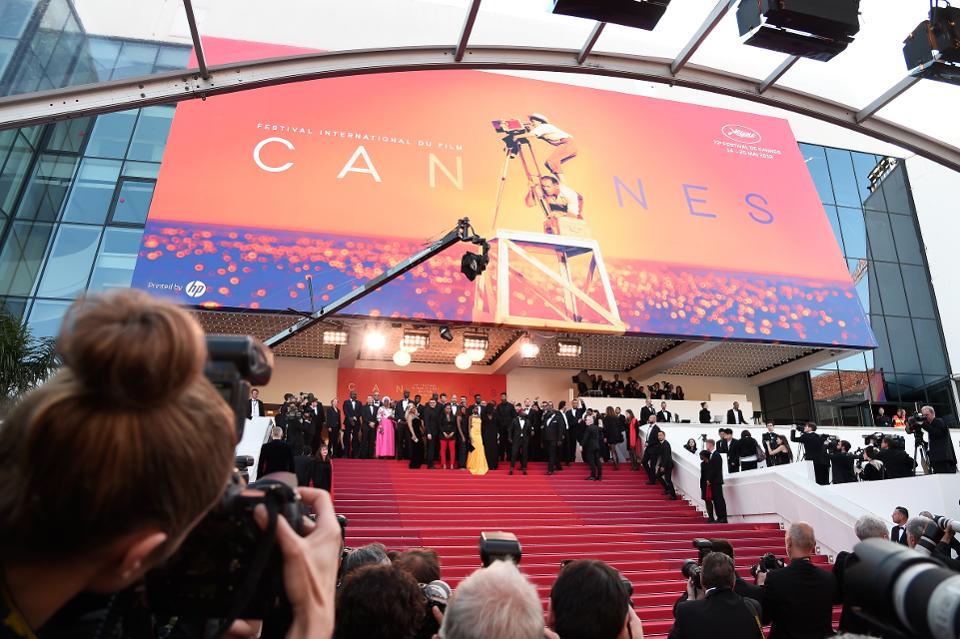 The premiere of the film 'Les Miserables' last year at the Cannes Film Festival on May 15, 2019, in Cannes, France / Eamonn M. McCormack / Getty Images

Azerbaijan has protested the Cannes Film Festival's selection and screening of a movie filmed in its Nagorno-Karabakh region occupied by Armenia, in which the director illegally portrays the occupied Azerbaijani lands as Armenian.

In a letter to the organizers of the film festival, officials at the Azerbaijani Community of Nagorno-Karabakh criticized the film "If the wind falls" (Si le vent tombe) shot by Armenian director Nora Martirosyan for distorting facts and misleading audiences.

The letter explains that the locations in the film, which include Khojaly airport that was chosen for shooting the film, belong to Azerbaijan and are currently under Armenia's occupation, adding that the airport was illegally restored by the government of Yerevan following the occupation, Trend.az reported.

The film was screened as part of the Cannes 2020 Official Selection on June 11. It tells the story of an international auditor Alain, who comes to assess the airport in the occupied Azerbaijani lands in order to make the final decision on the resumption of its activity. Edgar, a boy who settled near the airport, owns a strange business around the airfield. Alain ultimately gets in contact with the child and the "inhabitants" before making a final decision on the venue's reopening.

The Azerbaijani community of Nagorno-Karabakh in its letter offered insight into the realities that are explicitly distorted in the movie. It explained that there are no native inhabitants in Khojaly now as more than a million indigenous Azerbaijanis were forcibly expelled as a result of the occupation of the Azerbaijani lands, and for nearly 30 years, these people have been unable to return to their homes.

The roots of the Armenia-Azerbaijan Nagorno-Karabakh conflict date back to the late 1980s when anti-Azerbaijan sentiments in Armenia led to a full-scale armed invasion by Armenia into Azerbaijani 1991. The bloody war lasted for four years, claiming the lives of 30,000 ethnic Azerbaijanis, while one million were displaced forcibly from their homes amidst occupation and mass ethnic cleansing campaigns by Armenia's forces.

By a ceasefire in 1994, which ended the bloody war, Armenia forcibly seized the Nagorno-Karabakh region and seven surrounding districts of Azerbaijan. One of the bloodiest war crimes of Armenia as part of the Karabakh war took place in Khojaly, the airport of which is seen in the movie. During the war, Armenia's forces attacked Khojaly and massacred 613 innocent Azerbaijani civilians, including 63 children within less than a day. The atrocities in the occupied city are known as the Khojaly genocide, being one of the most brutal war crimes of the twentieth century.

Launched in 1974, the airport in Khojaly, the key location for the Armenian director's movie, is the one and only air harbor in the occupied Nagorno-Karabakh region of Azerbaijan. Restoration of the war-torn airfield was illegally carried out by the Armenia's government in 2009-2011. Despite a launch in October 2012, incoming and outgoing flights at the airport have remained suspended.

The government in Baku has harshly criticized Yerevan's actions in regard to the Khojaly airport, calling it a provocation that violates international laws. On May 9, 2011, Arif Mammadov, Chairman of the State Civil Aviation Administration of the Republic of Azerbaijan, said that according to aviation rules, each state has the right to take action against unauthorized flights within its internationally recognized airspace, including the physical destruction of the aircraft.

The US government, one of three countries alongside Russia and France that co-chair the OSCE Minsk Group for finding a political settlement to the Nagorno-Karabakh conflict, has also slammed the decision on reopening of the airport. On November 4, 2012, then American ambassador to Azerbaijan, Richard Morningstar said any flight from the airport could affect negatively to the peace building process and there should be a legal basis for the process.