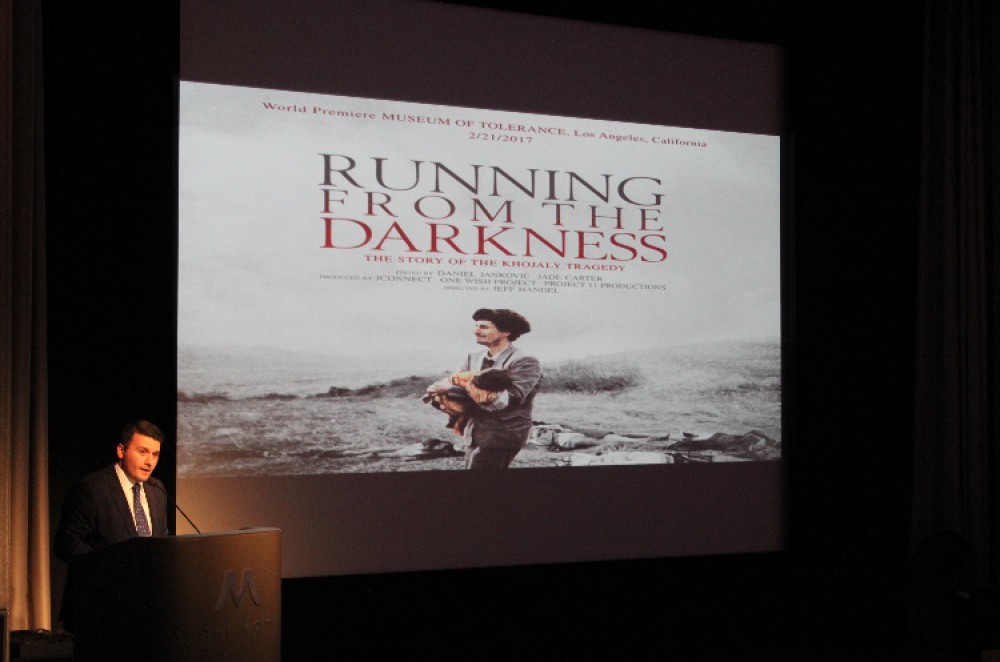 The “Running from the Darkness” documentary has made its debut screening at the Museum of Tolerance of the world-famous Simon Wiesenthal Center, February 21, 2019, Los Angeles, California / Azertag

Television channels in California put a spotlight on genocide against Azerbaijanis last week when they screened a documentary about the Khojaly Genocide, based around the stories of victims from nearly three decades ago.

The film, titled “Running from the Darkness” and shot by cinematographers based in Los Angeles, premiered on February 23 on public TV channels in the cities of San Francisco, San Jose, Campbell, Mountain View, Los Altos, Palo Alto and other cities in northern California, according to Oxu.az.

Documentary interviews with survivors as well with U.S. elected officials, reporters, academic experts; Christian, Jewish and Muslim faith leaders in Los Angeles and Armenian human rights advocate all gave insight into a tragedy that struck an Azerbaijani town 27 years ago.

“The normalcy of life experienced by residents of Khojaly would be turned upside down following the collapse of the Soviet Union at the end of 1991 and the beginning of 1992 as Azerbaijan was coming out of the Soviet fog and not yet economically and politically stable. Armenia advantageously moved forward with its long-standing plans of invading and annexing Azerbaijan,” a narrator says in the film, which is also available on YouTube.

“Armenia mounted a systematic offensive to drive out the Azerbaijani residents of Nagorno-Karabakh and illegally claimed the land as their own,” she continues, citing the focal point of conflict has roiled the South Caucasus region for more than a quarter of a century.

“Quickly, the conflict turned into a full-blown war. Armenia invaded Azerbaijan and seized 20 percent of Azerbaijan’s internationally recognized territory. The invasion was followed by brutal ethnic cleansing that resulted in the expulsion of over 800,000 Azerbaijanis from their homes.”

Late into the night on February 25, Armenia's forces, backed by the Infantry Guard Regiment No. 366 from a then-collapsed Soviet army, assaulted the town of Khojaly, located in the Nagorno-Karabakh region of Azerbaijan. The attack ended up killing 613 ethnic Azerbaijanis, including 106 women, 63 children and 70 elderly people; and taking 1,275 others as hostages. Another 150 Azerbaijani nationals went missing, and their fates remain unknown to this day. Those suffering major injuries or having been maimed totaled 487, including 76 children.

The massacre in Khojaly has been committed in line with a broader military campaign by Armenia to seize Azerbaijan's Nagorno-Karabakh region, where partial ethnic Armenian population shared life with indigenous Azerbaijanis. An internationally recognized part of Azerbaijan and located inside the country’s borders, the Nagorno-Karabakh region was the primary focus of an Armenian nationalists' invasion hatched in the early 1990s, when the USSR was in its death throes.

The war claimed the lives of over 30,000 Azerbaijanis, while nearly one million Azerbaijanis were internally displaced and 4,000 went missing. The full-scale war came to a stop in 1994, thanks to a ceasefire, but Azerbaijan’s Nagorno-Karabakh region and seven surrounding districts are still occupied by Armenia.

Salman Abbasov, a survivor of the Khojaly massacre, shared his story with the filmmakers of “Running from the Darkness,” recalling how the town was burnt to ashes, including people, due to bloodcurdling shelling by the army of Armenia. “It was like fire falling from the sky. There were dead bodies and wounded people all around us.”

“We can hear people shouting and mourning everywhere. We were trying to escape through the forest. We climbed the hills with the survivors. We stayed nine nights in the frosty forest,” Abbasov said.

Sadagat Huseynova, another survivor featured in the film, remembered how her daughter froze to death in her hands in the woods amidst their arduous efforts to escape.

“We sheltered ourselves in bushes. We did not have anything to make fire in order to warm the children.”

“My daughter Sevinj, born in 1985, was also freezing. I took her in my arms and cuddled, I wanted to warm her. She was frozen and died in front of my eyes. We covered her, so the birds and animals would not touch her,” she said moving into tears.

Prior to being aired on television in California, “Running from the Darkness” debuted at the Museum of Tolerance, part of the Simon Wiesenthal Center and considered one of the biggest and most influential Jewish human rights organizations in the world. The Museum of Tolerance pays homage to the world’s most recognized genocide, that of the Holocaust, when millions of Jews were exterminated by Nazi Germany.

Sixteen countries from around the world such as the Czech Republic, Romania, Slovenia, Bosnia and Herzegovina, Mexico, Colombia, Peru, Panama, Pakistan and Indonesia as well as Scotland from the United Kingdom and 24 state governments in the United States, including Texas, Florida, Pennsylvania, New Jersey, Georgia, Massachusetts, Indiana, Tennessee, Wisconsin, Arizona and Connecticut, have officially recognized the events in Khojaly as genocide of Azerbaijanis.