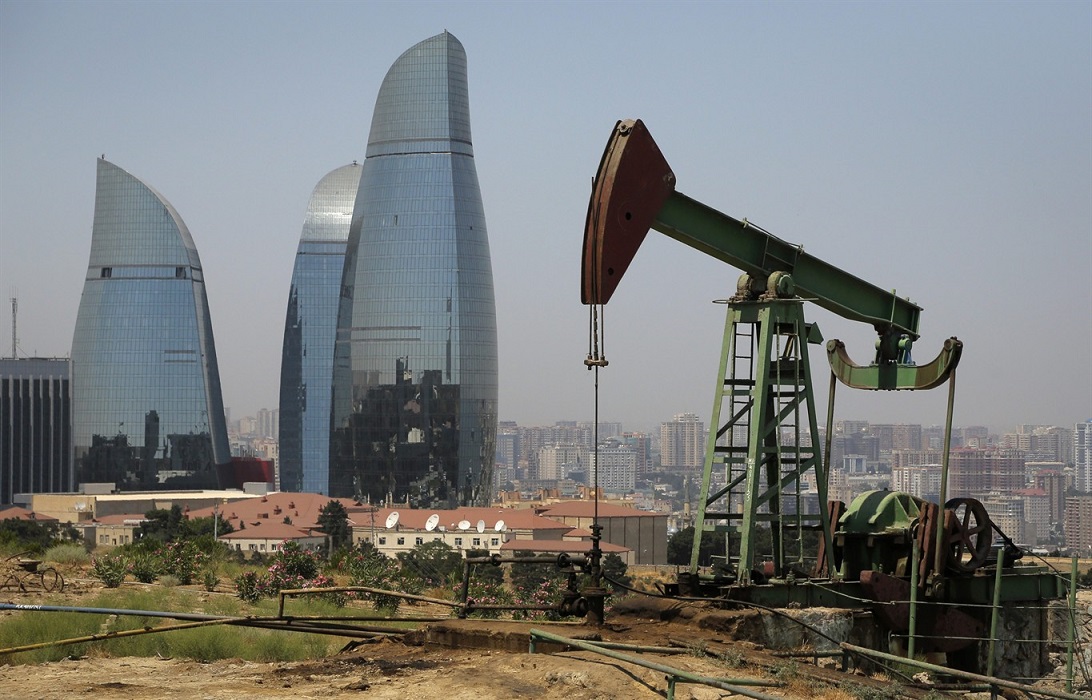 Flame Towers skyscrapers stand in the background as an oil pump works a nearby hill in Baku, Azerbaijan, June 19, 2015 / Dmitry Lovetsky / AP Photo

The British oil and gas giant BP plans to drill four new wells in Azerbaijan’s offshore and onshore hydrocarbon fields sometime in 2019 to explore ways to develop those areas in the future.

According to a report issued by the Mineral Catalogue on December 16, two of the wells are to be built in the shallow part of the water just off the Absheron peninsula, on the eastern edge of Azerbaijan and along the Caspian Sea’s shores. Another will be drilled at the offshore Shafag-Asiman field in the sea, and the fourth well will be at the onshore Gobustan field, located in the eastern part of the country.

“By early 2012 the Gilavar seismic vessel completed the planned 3D seismic acquisition on the structure, the first 3D seismic conducted over the contract area,” BP’s Regional President for Azerbaijan, Georgia and Turkey Gary Jones said at the International Caspian Oil & Gas Exhibition and Conference in Baku in May, as reported by Emerging Europe.

“The contracts envisage drilling at the Shafag-Asiman block of fields and the shallow water area around the Absheron Peninsula,” Jones said. “The data was then processed in Azerbaijan, the largest 3D survey processed in-country. Our teams are now planning an exploration well, with the view to start drilling in mid-2019. If we make a commercial discovery, this can be the next Shah Deniz.”

The Shafag-Asiman field sits on a 1,100 square kilometer (424 square mile) area, about 125 kilometers (78 miles) to the southeast of Baku and has never been explored. The deep-water section of the block is about 650-800 meters and has a reservoir depth of about 7,000 meters. Reserves are estimated around 500 billion cubic meters (bcm) of natural gas and 65 million tons of condensate.

The government of Azerbaijan allowed BP to drill wells for the Gobustan onshore project in September, when the company acquired a 61 percent participating interest in the field. BP announced that it will be the main operator of the field, and will start by drilling one exploratory well in order to get a feel for the location’s prospects and possibly lock down a contract later next year.

BP remains the largest foreign oil and gas operator in Azerbaijan, since 1992. It currently operates projects throughout the country, including the Baku-Tbilisi-Ceyhan and South Caucasus Pipeline in partnership with the government. It also operates two giant fields – the Azeri-Chirag-Gunashli (ACG) oil and the Shah Deniz (SD) gas fields located underneath the Caspian Sea. Shah Deniz is considered the second largest discovery of the company worldwide, after the Prudhoe Bay oil field in Alaska.

“I’m proud to say that Azeri-Chirag-Gunashli’s production and processing facilities are among the largest in BP,” Jones said at the conference in May. “To date, these platforms have produced over 3 billion barrels of oil, over 80 billion cubic meters of SD gas and over 160 million barrels of condensate. Eight of 10 most productive BP wells globally are in the Caspian. Of these 5 are on ACG and 3 on SD.”