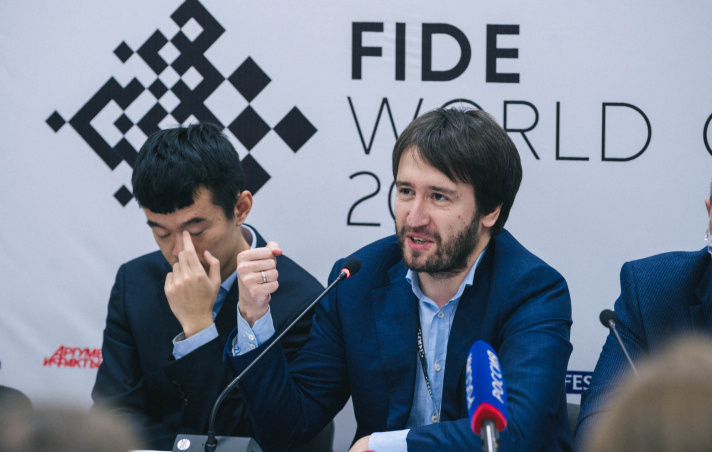 Teymur Radjabov makes a winner gesture in a press conference after the victory of Ding Liren, Khanti-Mansiysk, Russia, October 5, 2019 / Chess24.Com

Radjabov, 32, became the first Azerbaijani to win the FIDE World Cup after he outplayed Chinese grandmaster Liren 6:4, in the two 5-minute blitz games within the final tie-break on October 5. Two rapid games of the prestigious tournament that took place before the tie-break ended in a draw.

“Won the World Chess Cup 2019. Nothing more to say,” Radjabov posted on his Twitter account following his triumph.

The path of the Azerbaijani grandmaster to the final of the 2019 FIDE World Cup was not as easy as some may think. Previously, he won his compatriot Shahriyar Mamedyarov, who ranks 7 on the FIDE Top 10 rating, and outshone French mega mind, the world’s sixth-best player Maxime Vachier-Lagrave.

Thanks to his recent victory, Radjabov advanced by eight spots on the FIDE live Top10 rankings to come in at number nine. He currently ranks 15 on the FIDE Top 100 players chart. After losing to Radjabov, Liren ended the tournament up as a runner-up, while Vachier-Lagrave took the bronze medal.

Meanwhile, there were rumors that the Azerbaijani mega mind thinks about retirement from professional chess. In his interview Radjabov said he may consider quitting for a long time, adding that he will probably join the upcoming FIDE Candidates tournament.

“To be honest I planned to leave first, but I left last. All my friends left the tournament and I was in such a solitary state that I either had to win the tournament or it would be kind of annoying to stay to the end. To play for 3rd place would be very tough,” Radjabov said, according to a report by Chess24.com.

“I thought I have to make some plans maybe to prepare for the Candidates, but in a really relaxing manner. I’m not sure Carlsen is there shaking in his chair at home that I’m going to prepare for it, but it’s just kind of fun for me.”

The eight-player 2020 FIDE Candidates will be held in the Yekaterinburg city of Russia in March-April of 2020.

Radjabov has got the fame instantly at his 15 when he defeated world champion Garry Kasparov in the Linares tournament in 2003. The peak of his professional career came nine years later in November 2012 after he ranked number four in the world with an overall score of 2793.

Meanwhile, President of Azerbaijan Ilham Aliyev has sent a congratulatory letter to Radjabov, referring to him as the opener of an all-new glorious page in the history of Azerbaijani chess and wishing him new successes.