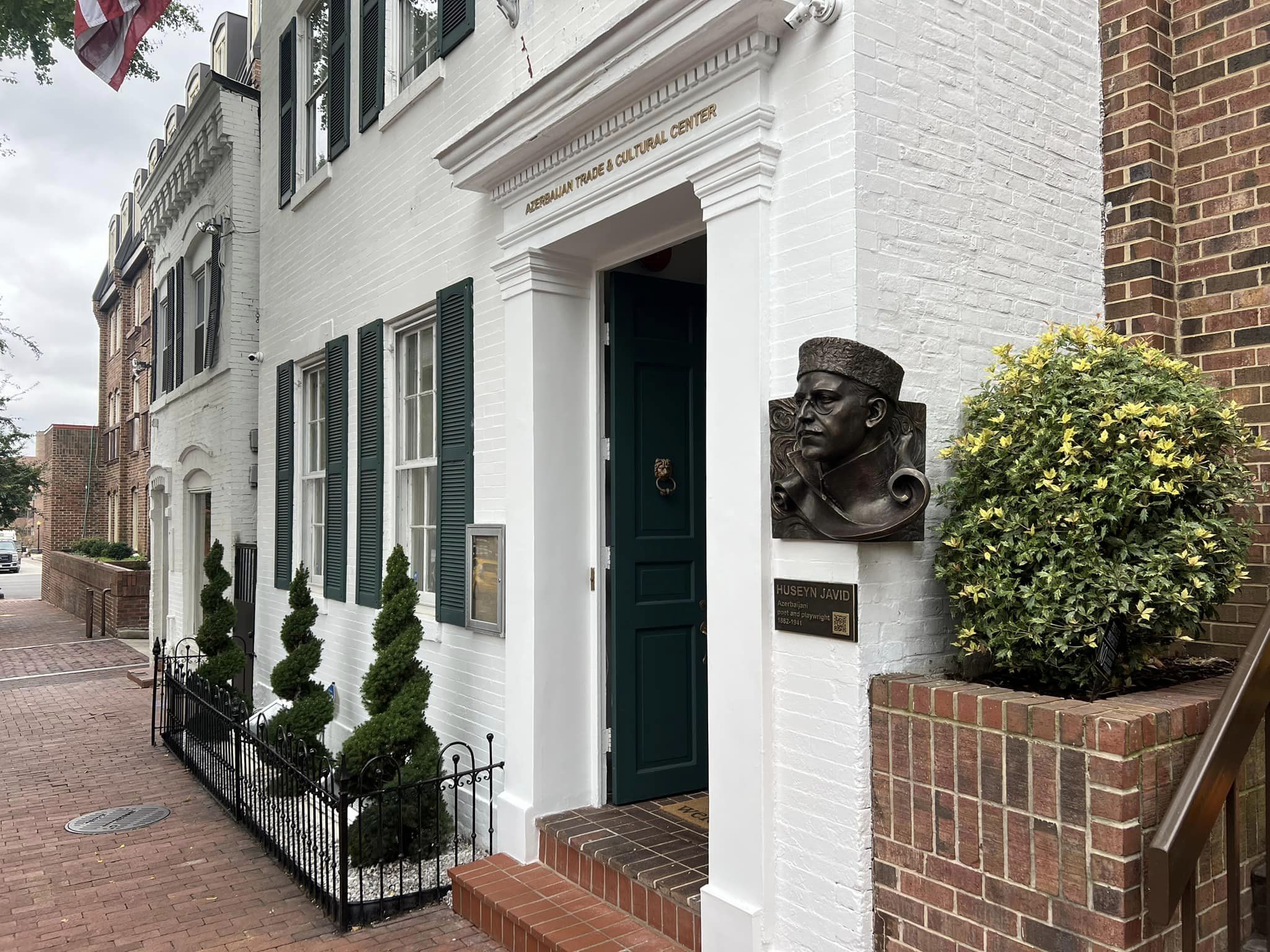 A bas-relief to the memory of the prominent Azerbaijani poet Huseyn Javid was inaugurated by the United States-Azerbaijan Chamber of Commerce (USACC) representatives in Georgetown, Washington D.C., October 24, 2022 / USACC

A bas-relief to the memory of the prominent Azerbaijani poet Huseyn Javid was inaugurated in the Georgetown Historic District in Washington D.C. on October 24.

"We thank all who supported us in this endeavor, especially the Embassy of Azerbaijan, Washington, D.C., and the Ministry of Culture of the Republic of Azerbaijan who was with us from the beginning of the project," the United States-Azerbaijan Chamber of Commerce (USACC) wrote on Facebook.

USACC is the custodian of the memorial and legacy of Huseyn Javid in Washington D.C.

Huseyn Javid was one of the most prominent poets and playwrights of Azerbaijan standing at the forefront of romanticism in the history of Azerbaijani literature.

Born as Huseyn Rasizadeh in 1882 in Nakhchivan, he started his career as a poet, with his first poetic works reaching the readers in 1904. In 1910, Javid took his first steps in dramaturgy by creating his play titled “Ana” (Mother), which was published in 1913 in Tbilisi. Although the subject of the play had its roots in a medieval Italian novella, Javid adapted it to the national thinking, and Azerbaijani-Turkic mentality, and ultimately created an original work.

One of the ultimate works of Huseyn Javid is his “Iblis (The Evil)” tragedy written in 1918. The book collects the outcomes of the author’s observations of the processes happening in the early 20th century. Javid introduces his main character as “evil,” blaming him for all disasters and catastrophes, such as wars, their causes, and tragic consequences, as well as sharing his philosophical views of how the future destiny of the world could be.

Huseyn Javid’s creative years coincided with the mass collectivization campaign rolled out by Soviet rule and Joseph Stalin’s purges, which affected Azerbaijan among other Soviet republics. At the height of totalitarianism, the author refused to serve as one of Moscow’s intellectual propagandists of "revolutionary socialist achievements." Javid’s resistance ended with his arrest in 1937 on trumped-up charges of being a "founding member of a counter-revolutionary group that was plotting to overthrow the power."

After spending two years in Baku prisons, he was sentenced to eight years for "participating in anti-Soviet propaganda" and exiled to Siberia in 1939. The poet, whose health deteriorated after many years of psychological stress, died in the village of Shevchenko in Russia’s Irkutsk Region on December 5, 1941.

Huseyn Javid was officially exonerated in 1956 and in 1982, on his 100th jubilee, his remains were later repatriated from Shevchenko to Nakhchivan and reburied in a mausoleum built to honor his memory and legacy.

Later, a monument to Javid was unveiled in Azerbaijan’s capital Baku in 1993 and in King's Park in the Montenegrin city of Podgorica in 2013.