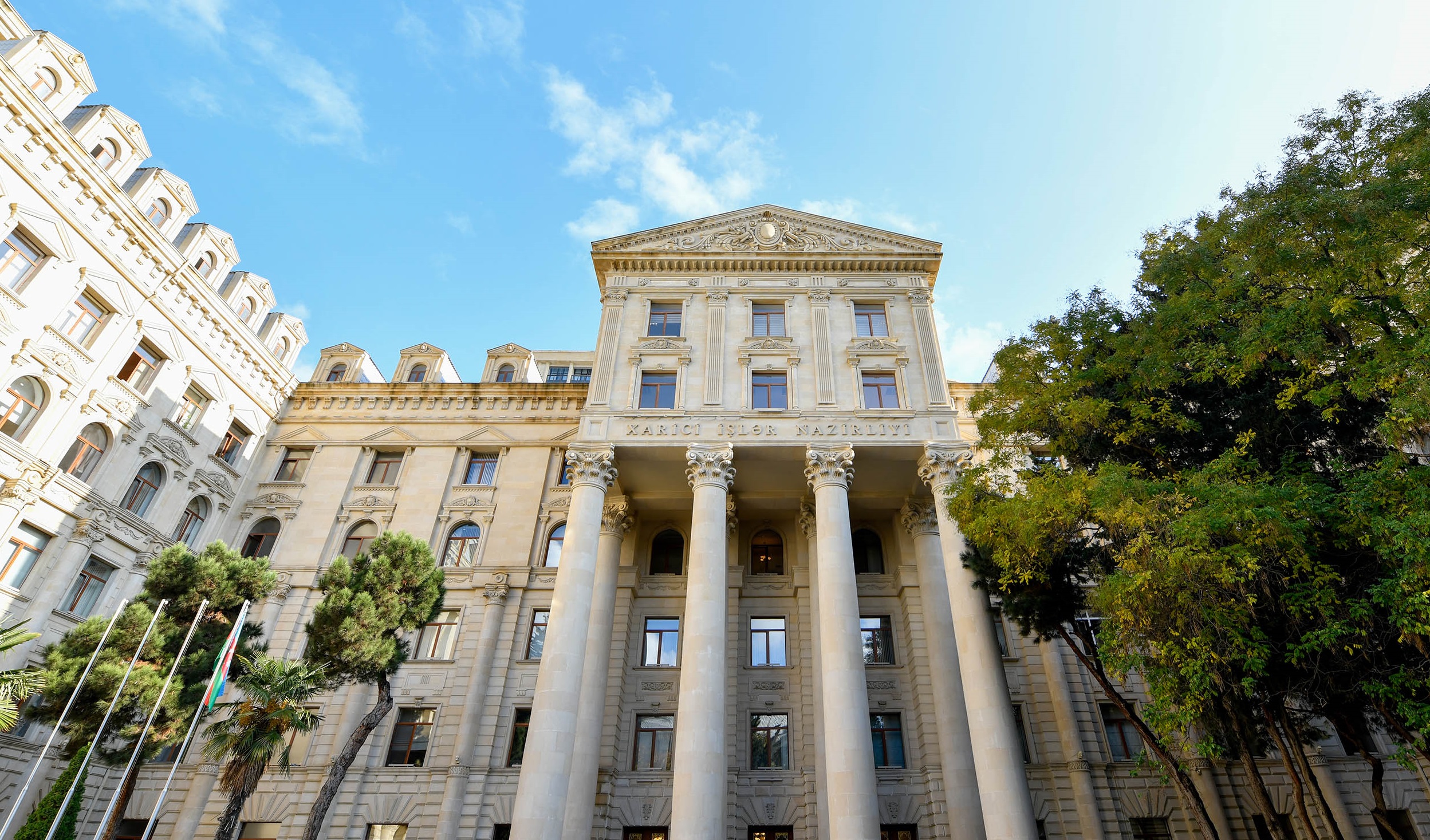 The building of the Foreign Ministry of Azerbaijan in Baku / Oxu.Az

The Foreign Ministry of Azerbaijan has responded to French President Emmanuel Macron’s recent remarks about Armenia-Azerbaijan relations, including France’s role in observing the ceasefire, the return of so-called prisoners of war and the delimitation and demarcation of the state border.

In a meeting with Armenia’s acting Prime Minister Nikol Pashinyan in Paris on Tuesday, President Macron used pro-Armenian rhetoric when he said France always stood by Armenia. He explained that Paris is ready to support Yerevan in its current predicament and enhance the ceasefire between Armenia and Azerbaijan and called on Baku to release so-called Armenian prisoners of war.

Azerbaijani Foreign Ministry’s spokesperson, Leyla Abdullayeva said the ceasefire between Armenia and Azerbaijan is ensured through legally binding documents and the Russian peacekeeping mission on the ground.

"A ceasefire is being ensured in the region, based on a joint statement signed by the leaders of Azerbaijan, Armenia and Russia on November 10, 2020. Russian peacekeeping forces are carrying out a peacekeeping mission to ensure a ceasefire. We do not see any role of France in this matter," she told reporters.

As for Macron's call for the release of the so-called Armenian prisoners of war, Abdullayeva said Baku has always been committed to the principle of “all for all” in exchanging such individuals, adding her view that Armenia repeatedly tries to distort the truth.

“As we have repeatedly stated, there are no Armenian prisoners of war in Azerbaijan. As for the members of the sabotage group sent to Azerbaijan on November 26, 2020 after the signing of the trilateral statement, who committed a terror act, as well as the members of the intelligence-sabotage group attempting to plant landmines in the road in the direction of Kalbajar region on May 27, they are not prisoners of war,” she added.

Azerbaijani officials believe that despite its "special sympathy for Armenia", France should be neutral on Armenia-Azerbaijan relations as an OSCE Minsk Group Co-Chair. According to Abdullayeva, Azerbaijan hopes that France will take a neutral and impartial position in line with its co-chairing mandate.

The French authorities have openly supported Armenia in the war with Azerbaijan in the latter's Karabakh region last year when the decades-old Armenia-Azerbaijan conflict transformed into an all-out war on September 27. On that day, Armenia's forces deployed in the once occupied Azerbaijani lands shelled military positions and civilian settlements of Azerbaijan. Non-stop artillery attacks prompted counter-offensive measures by the Azerbaijani army.

Azerbaijani troops liberated over 300 settlements, including the cities of Jabrayil, Fuzuli, Zangilan, Gubadli, and Shusha, from nearly 30-year-long illegal Armenian occupation in a 44-day-long military operation codenamed "Iron Fist." The war ended in a trilateral statement signed on November 10 by Armenia, Azerbaijan, and Russia. Under the statement, Armenia also returned the occupied Aghdam, Kalbajar, and Lachin districts to Azerbaijan by December 1. Russia deployed a peacekeeping contingent to safeguard the ceasefire in the region under the agreement.

In November and December of last year, after the ceasefire was signed, armed sabotage groups of the Armenian army attacked the Azerbaijani positions in the Khojavand district killing four servicemen and a civilian. Armed saboteurs have been caught and detained by the Azerbaijani forces.

On May 27, two armed sabotage groups consisting of 24 Armenian servicemen infiltrated Azerbaijani territory. They were trying to plant mines in the routes used for supplying the Azerbaijani frontline positions. Azerbaijani forces besieged and caught six of them, while the others immediately retreated.

Azerbaijani authorities say those armed saboteurs who resorted to provocations against the Azerbaijani forces after the ceasefire was signed are terrorists. However, the Armenian side has been trying to label them as prisoners of war, a claim that is unanimously rejected by Baku.

Armenia's government has sought help from Russia and the Collective Security Treaty Organization (CSTO) military bloc regarding its claims. As a CSTO member along with Russia, Belarus, Kazakhstan, Kyrgyzstan and Tajikistan, Armenia can get the organization’s collective assistance in case of foreign intervention.

Azerbaijani authorities have refuted Armenia's claims and announced that the military forces of the country were taking necessary measures to protect the internationally recognized borders of Azerbaijan. President Ilham Aliyev accused the Armenian authorities of showing an inadequate response to the border situation and trying to internationalize the issue.