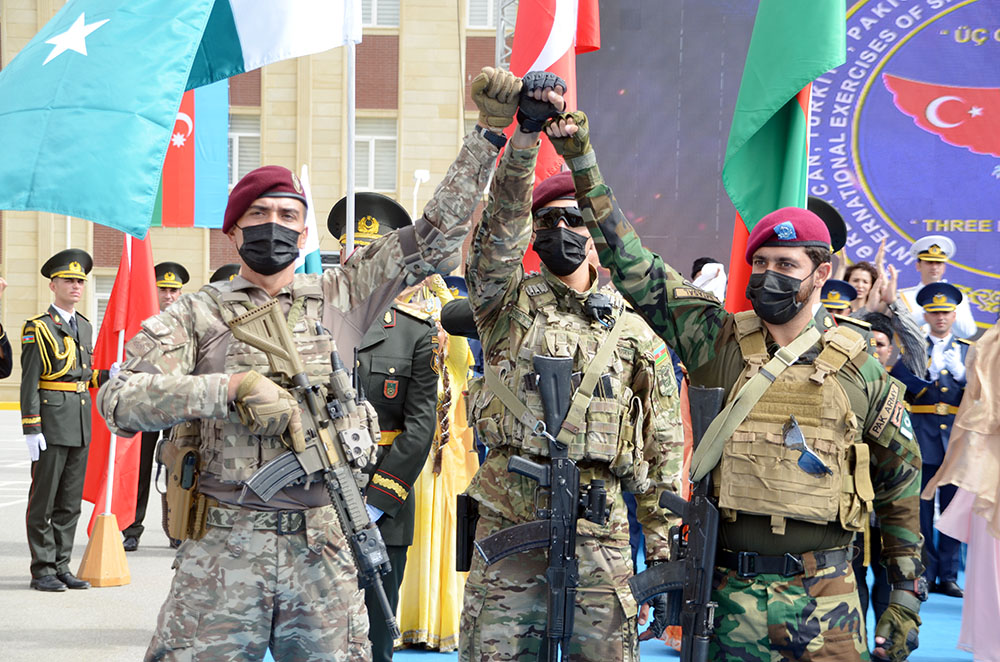 The exercises, dubbed “Three Brothers – 2021”, kicked off on September 12 with the participation of the special forces’ commanders from the three countries.

"Azerbaijan, Turkey and Pakistan have entered the history of mankind as close friends and brothers. At the heart of these relations is the close ties between our peoples,” Commander of the Azerbaijani Special Forces, Lieutenant-General Hikmat Mirzayev was quoted as saying by the country’s Defense Ministry.

“Evidence of this can be seen in the solidarity and support of Turkey and Pakistan to Azerbaijan from the first day of the 44-day counter-offensive operations launched by Azerbaijan against the Armenian armed forces on September 27, 2020,” he added, referring to the 44-day Armenia-Azerbaijan war in the latter's Karabakh region last year that saw Azerbaijan liberate its territories from Armenian occupation.

Lieutenant-General Mirzayev believes that the “Three Brothers – 2021” exercises, which are being held September 12-20, will provide an extensive exchange of experience and views between servicemen of the three countries and make significant contributions to further improvement of the professional training. The international exercises will ultimately help further strengthen the existing ties between the armies and enhance the approach to countering terror threats.

The exercises came on the heels of the tripartite meeting of the three countries’ parliamentary speakers in Baku in July. The meeting ended with the signing of the Baku Declaration, which established an all-new format of tripartite cooperation. The declaration was said to be a significant step in reinforcing and promoting the Azerbaijan-Turkey-Pakistan cooperation axis as one of the potentially influential unions in the region.

The three countries have shown mutual support on multiple issues in the international arena, including matters related to the conflicts in Karabakh, North Cyprus, and Kashmir. Both Turkey and Pakistan rejected diplomatic relations with Armenia due to its occupation of Azerbaijan’s Karabakh (Garabagh) region in the early 1990s.

The war between Armenia and Azerbaijan in the Karabakh region last year put the spotlight on Azerbaijan's relations with Turkey and Pakistan. Both Ankara and Islamabad were voicing strong political support for Azerbaijan, which liberated its territories from nearly 30-year-long illegal Armenian occupation.

Azerbaijani military went through a bloody 44-day war in the country's Karabakh region from September 27 through November 9 last year. The political support of Turkey and the modern equipment purchased from the country have had an impact on Azerbaijan’s victory in the war.

Turkish Bayraktar TB2 unmanned aerial vehicles (UAV) played a crucial role in giving Azerbaijan a clear edge over Armenia in the Karabakh region, an internationally recognized territory of Azerbaijan. The cutting-edge drone fleet of the Azerbaijani army, which includes Bayraktar TB2 next to Israeli-made UAVs and loitering munitions, is said to have destroyed more the 200 pieces of armor and artillery systems of Armenia during the hostilities.

The post-war relations between the two nations entered a new phase with the signing of the Shusha Declaration in the liberated Shusha city of Azerbaijan on June 15, 2021. The document ushered in a new era of cooperation in multiple fields, including defense, economy, energy, trade, diaspora, media and others.

Later in June and September, the Azerbaijani and Turkish forces held respectively live-fire drills and exercises of underwater offense and defense groups.

The Pakistani authorities, including the country’s Prime Minister, Foreign Ministry, and National Army, have also voiced full political support for Azerbaijan’s counter-attack operations last year. Pakistan’s Prime Minister Imran Khan has repeatedly reaffirmed that the Karabakh region is an internationally recognized integral part of Azerbaijan. Pakistan has not recognized Armenia as a state due to its decades-long occupation of the Azerbaijani lands.

Following the war, high-ranking Pakistani officials visited Azerbaijan where they discussed new ways to expand cooperation between the two countries, in particular, the military partnership.

Azerbaijan, in its turn, supports Pakistan’s position in the Kashmir conflict. Authorities in Baku put justice, international law, and brotherly relations with Pakistan as the cornerstones of its support for Islamabad’s Kashmir policy.