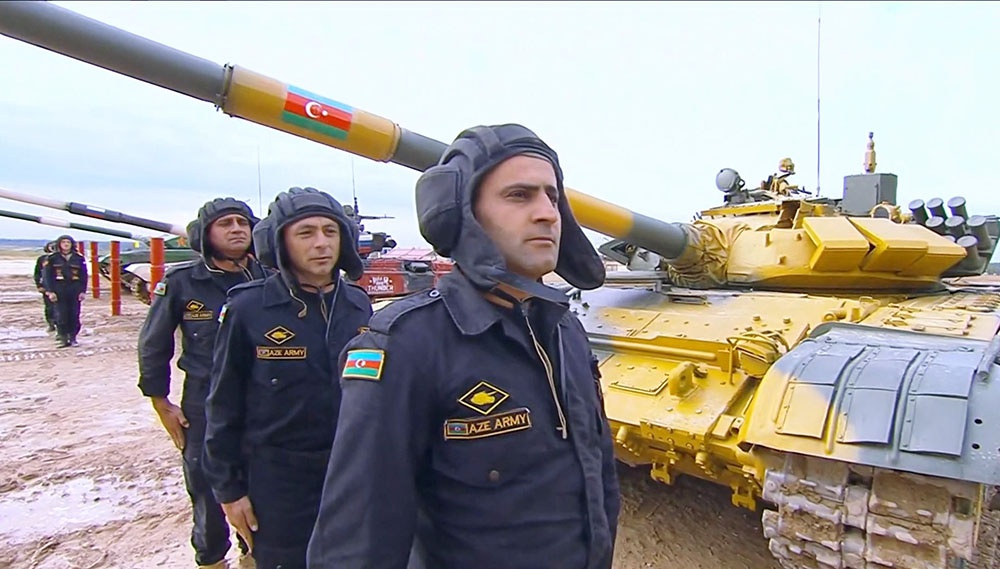 Armenia's armed forces killed at least 10, including five members of one family, and injured 30 civilians in Azerbaijan in the past two days of heavy clashes. / Ministry of Defense of Azerbaijan

Azerbaijan has announced a partial military mobilization after clashes with Armenia erupted along the front zone in the occupied Nagorno-Karabakh region of Azerbaijan.

Azerbaijani President Ilham Aliyev on Monday signed a decree to confirm the partial military mobilization in the country after Armenia's armed forces attacked Azerbaijani positions and civilian settlements along the front zone in the occupied Nagorno-Karabakh region, an internationally recognized territory of Azerbaijan.

Under the order, the Azerbaijan State Service for Mobilization and Conscription will implement measures related to the recruitment of citizens for military service and military transportation, reported APA news agency.

Azerbaijan's announcement came after Armenia declared martial law and total military mobilization on Sunday. The clashes between the two South Caucasus countries escalated for the second time this year after Armenia's forces deployed in the occupied Azerbaijani lands targeted Azerbaijani civilian settlements and military positions, leading to casualties - both civilians and military.

At around 6:00 am on September 27, Armenia's armed forces committed a large-scale provocation, subjecting the positions of the Azerbaijani armed forces and civilian settlements shelling from large-caliber weapons, mortars, and artillery installations of various calibers along the front zone in the occupied Nagorno-Karabakh region.

Armenia's armed forces killed at least 10, including five members of one family, and injured 30 civilians in Azerbaijan in the past two days of heavy clashes.

As a result of successful counter-offensive operation, the Azerbaijani Army liberated seven occupied villages of Azerbaijan in Fizuli and Jabrayil regions, including the villages of Garakhanbeyli, Garvand, Kend Horadiz, Yukhary Abdurahamanli and Ashagi Abdurahmanlı of the Fizuli region, as well as the villages of Boyuk Marjanli and Nyuzgar of the Jabrayil region. The Azerbaijani Army also reclaimed a 3,000-metre-high strategic Murovdag peak of the Murov mountain, a crucial point for controlling transport communications between Armenia and the occupied Nagorno-Karabakh region of Azerbaijan.

According to Baku, the Armenian side lost at least 550 people, 18 drones, and 22 tanks as well as several dozen other military vehicles on the first day of the heavy fighting that erupted along the front zone in the occupied territories of Azerbaijan.

"According to intelligence reports obtained at the end of the operation day, the Armenian army suffered heavy losses as a result of the fighting," Azertag quoted the Azerbaijani Ministry of Defense on Monday. "Thus, 22 enemy tanks and other armored vehicles, 15 OSA Anti-Aircraft missile systems, 18 unmanned aerial vehicles (UAVs), 8 artillery pieces were destroyed, more than 550 people were killed and wounded. The enemy’s 3 ammunition depots were destroyed in different directions."

However, the Armenian side stated that 84 servicemen had been killed and nearly 200 others injured in the recent clashes.

The ongoing fighting between Armenia and Azerbaijan marks the most intense clashes since 2016, when at least 200 people were killed. The clashes reignited one of the world's oldest conflicts, putting the two neighboring countries on the brink of a full-scare war.

Tensions between Yerevan and Baku escalated in July when Armenia's troops violated a ceasefire agreed in 1994 and attacked Azerbaijani positions with artillery fire. For the first time in 26 years, the two sides used field artillery, mortars and attack drones far from the contact line in the main conflict zone - the occupied Nagorno-Karabakh region of Azerbaijan.

Although the United Nations Security Council (UNSC) adopted four resolutions demanding the immediate withdrawal of the occupying forces from Azerbaijani lands and the return of internally displaced Azerbaijanis to their ancestral lands, Armenia has failed to comply with all four legally binding documents.