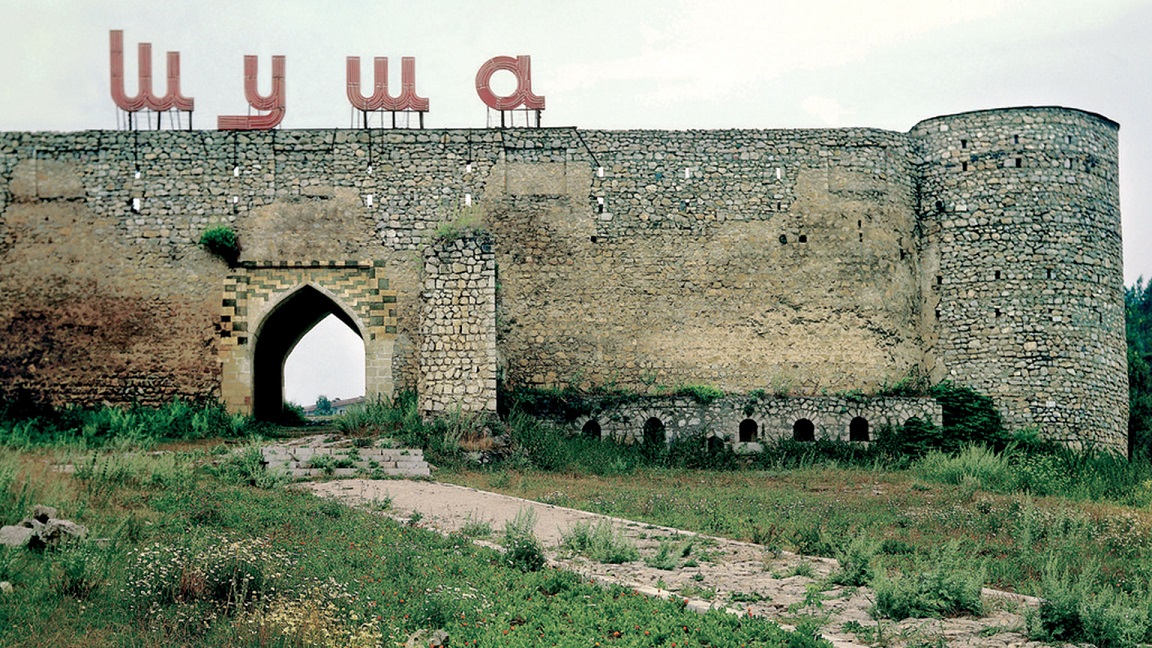 Gates of Shusha castle in the Nagorno-Karabakh region, Azerbaijan. Armenia occupied Shusha on May 8 in 1992

A visit by the separatist leader of the illegal regime in the occupied Nagorno-Karabakh region of Azerbaijan to Paris on Thursday sparked outrage in Azerbaijan and making Azerbaijan announce that it may consider relations between the Caspian country and France.

Bako Sahakyan held meetings to discuss what the Armenian media has characterized as “bilateral relations” between France and the bogus “republic” in Nagorno-Karabakh, the region that belongs to Azerbaijan both internationally and historically but had a partial ethnic Armenian population alongside indigenous Azerbaijanis. This has been used by Armenia, Azerbaijan’s western neighbor in the South Caucasus region, as a motive since the early 1990s to kick off military aggression against Azerbaijan to seize the region.

The Foreign Ministry of Azerbaijan interpreted Thursday’s visit as another futile attempt to promote a puppet regime established by Armenia.

“France, by making possible the realization of such visit and accepting the representatives of the illegal regime, not only contradicts the letter and spirit of the existing bilateral cooperation relations and signed Agreements between Azerbaijan and France, but also shows disrespect to the supremacy of norms and principles of international law and its own international commitments,” reads a statement issued by the ministry on Thursday.

“The fact that France, a permanent member of the UN Security Council and one of the co-chairs of the OSCE Minsk Group responsible for facilitating the negotiation process on the settlement of the Armenia-Azerbaijan Nagorno-Karabakh conflict, creates conditions for the promotion of illegal regime seriously undermines the objectivity and impartiality of this country. This continuous and double standard approach by France induces Azerbaijan to consider its relations with this country.”

The Nagorno-Karabakh region, a mountainous part of Azerbaijan located in the southwest, is occupied by Armenia and run by the bogus separatist regime who illegally declared its separation from Azerbaijan during a conflict that broke out in the early 1990s. The Nagorno-Karabakh region and seven adjacent districts – Lachin, Kalbajar, Agdam, Fuzuli, Jabrayil, Qubadli, and Zangilan – of Azerbaijan were subsequently occupied by Armenia in the wake of a full-scale war that lasted from 1991 until the ceasefire in 1994.

In 1993 the United Nation’s Security Council tabled four resolutions all demanding the full withdrawal of Armenian troops from Azerbaijan. Yerevan has ignored all of them to this day. Yerevan established the illegal regime in the occupied Nagorno-Karabakh region of Azerbaijan. The bogus “republic” in Nagorno-Karabakh is not recognized by any country.

Tofig Zulfugarov, who served as Azerbaijan’s foreign minister from 1998-1999, says Sahakyan’s visit to France can be taken as proof of Armenia’s policy of deliberate and unapologetic occupation.

“Bako Sahakyan confesses and confirms Armenia’s occupation policy. Because his diplomatic documents belong to Armenia,” Zulfugarov told Caspian News. “A person with the diplomatic passport from Armenia or the citizen of Armenia in France can introduce himself whoever he wants. In fact, he is from Armenia and he represents claims and annexation efforts of Armenia for the territories of Azerbaijan.”

“The conflict in Nagorno-Karabakh region is between Armenia and Azerbaijan. Those who claim they rule the occupied lands of Azerbaijan are just a temporary administration, appointed by Armenia, for fulfilling the occupation and annexation policy.”

Zulfugarov said that France, which is one of the OSCE Minsk Group Co-chairs, along with the United States and Russia, is responsible for facilitating the negotiation process for a peaceful settlement of the conflict. Hosting a visit by Sahakyan, he says, contradicts that.

“France should prevent supporting such developments that can reinforce the occupation and annexation. [As a co-chair] they meet with the officials in Armenia and Azerbaijan within their mediation role. So, what was Sahakyan seeking in France?”

The Azerbaijani embassy in France sent a note of protest to the Foreign Ministry of France on November 17 in regard to the visit of the separatist Sahakyan to Paris, RIA Novosti reported. The Foreign Ministry of France issued a statement on the same day saying that France does not recognize the so-called "Nagorno-Karabakh Republic" and does not maintain any relationship with those who consider themselves its leaders, according to RIA Novosti.