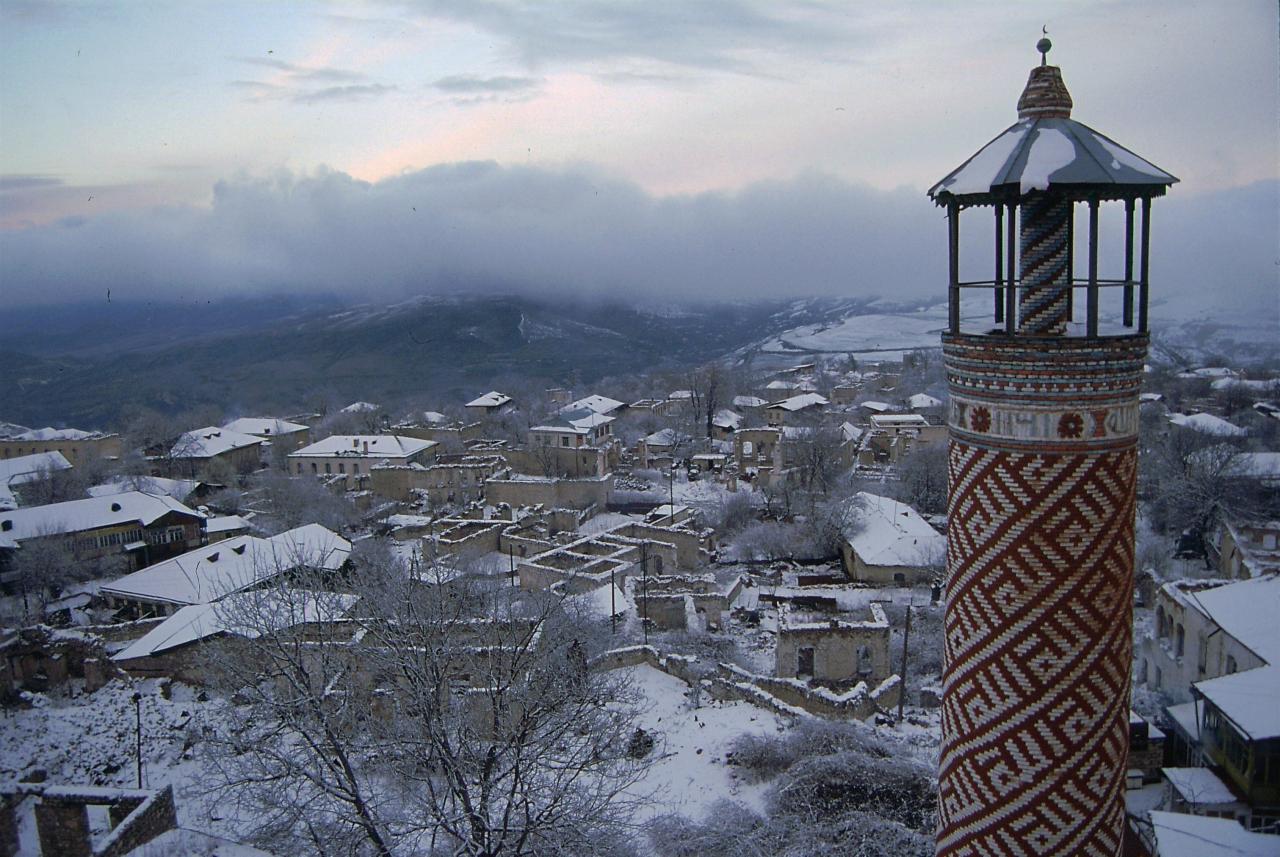 Shusha and the medieval arch bridges are located on the territory that has been liberated by Azerbaijani forces from Armenia's occupation after an escalation of the conflict in the Karabakh region of Azerbaijan in late September.

One of Azerbaijan's most stunning architectural treasures - the Khudafarin Bridge - along with the cultural gem known as the city of Shusha, which were recently liberated from Armenia's occupation by Azerbaijani forces, may soon be included on the United Nations Organization for Education, Science, and Culture (UNESCO) World Heritage List.

Addressing an event at the Azerbaijan National Carpet Museum, Acting Minister of Culture Anar Karimov told journalists that the city of Shusha and Khudafarin bridges are being considered for the UNESCO’s World Heritage List.

"We have already started the process of preparation of a nomination file in this regard," Media.az quoted Karimov as saying on Monday. "First of all, Khudaferin bridges should be included in the initial list of the UNESCO. After it, we will work to include it in the World Heritage List with Iran as the bridges are located on the border zone. It is one of the important issues for us. Because Khudafarin bridges are considered one of the pearls of Azerbaijani architecture."

Two Khudafarin bridges spanning over the Araz River in the Jabrayil region connect Azerbaijan with Iran. Built in the 11th and 13th centuries, the magnificent historical monument suffered serious damage from Armenia’s cultural vandalism after the occupation in 1993.

"We will collect all the facts and send them to international organizations, and at the same time we will carry on the work on restoration and conservation of these monuments," Karimov said, according to Sputnik. In his statement, the minister stressed that international and local experts have been invited to visit Shusha to present the crimes of the Armenian side to the whole world.

Shusha and the medieval arch bridges are located on the territory that has been liberated by Azerbaijani forces from Armenia's occupation after an escalation of the conflict in the Karabakh region of Azerbaijan in late September. The fighting between the Armenian and Azerbaijani forces broke out on September 27 when Armenia's troops deployed in the occupied Azerbaijani lands began shelling heavily the military positions and civilian settlements of Azerbaijan. As a result of Azerbaijan's successful counter-attack measures to push back Armenia's offensive, Azerbaijani armed forces liberated district of Jabrayil, where the Khudafarin bridges are located, in October and Shusha, one of two key cities along with Khankendi in the Nagorno-Karabakh region of Azerbaijan, on November 8.

The occupation of Azerbaijan's Nagorno-Karabakh region by Armenia came after both countries gained independence following the Soviet Union’s dissolution in 1991. Armenia launched a military campaign against Azerbaijan which lasted until a ceasefire was reached in 1994. As a result of the bloody war, Armenia occupied 20 percent of Azerbaijan’s internationally recognized territories – the Nagorno-Karabakh region and seven surrounding districts. Azerbaijan faced a humanitarian crisis during the war, in which 30,000 of its citizens were killed, while one million others were forcibly displaced from their homeland. Although the United Nations Security Council adopted four resolutions in 1993 demanding the immediate withdrawal of the occupying forces from Azerbaijani lands and the return of internally displaced Azerbaijanis to their ancestral lands, Armenia failed to comply with all four legally binding documents.

Often dubbed the temple of Azerbaijani music and culture and the conservatory of the South Caucasus, Shusha has long been one of the main administrative, economic and cultural centers of Azerbaijan since its establishment by indigenous Azerbaijanis.

Founded by the Karabakh Khan Panah Ali in the year 1750 on the site of an ancient settlement, Shusha is an example of Azerbaijan medieval urban development and a live encyclopedia of Karabakh architecture. It was well known for its silk trade, carpets, spices and horses. Located in the Lesser Caucasus mountain range, Shusha became a flourishing cultural capital with many reverberating developments still expressed in modern Azerbaijani culture.

Shusha is well known for its ancient carpet weaving, and Karabakh’s rugs increased the fame of Azerbaijan’s carpet school around the world. Shusha became the center of Karabakh weaving tradition and played one of the key roles in the development of Azerbaijan's carpet weaving industry in the 19th century. Carpets produced in Shusha were exported to global markets in the late years of the same century. The ornamental and plot groups of Shusha carpets defined the mainline trend in local carpet-weaving.

Shusha is home to one of the leading schools of mugham, the traditional Azerbaijani genre of vocal and instrumental arts that have influenced music throughout the Caspian and Middle East regions. The city is often referred to as "the Music Conservatory of the Caucasus" because of the many talented musicians the city has produced throughout its history, such as the founding father of Azerbaijani composed classical music and opera, Uzeyir Hajibeyli, world-famous Azerbaijani poet Molla Panah Vagif and poetess Khurshudbanu Natavan and famous Azerbaijani and Soviet opera tenor Bulbul.

Currently, many of Azerbaijan's cultural sites have been included in UNESCO's World Heritage List, including the Walled City of Baku with the Shirvanshah's Palace and Maiden Tower, Historic Centre of Sheki with the Khan’s Palace and Gobustan Rock Art Cultural Landscape.